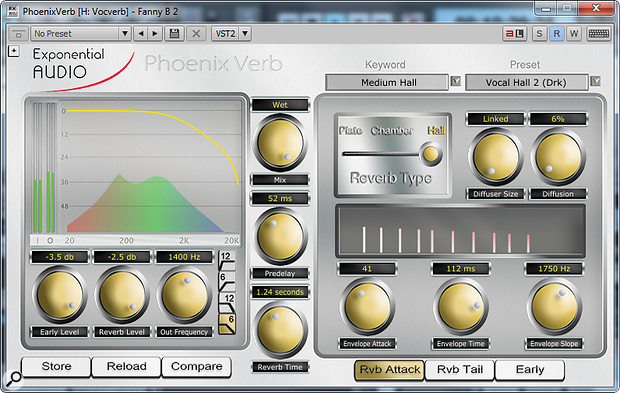 Exponential Audio are a relatively new company, but they can draw on a wealth of experience. As one of the men behind Lexicon’s revered PCM series, founder Michael Carnes has few peers when it comes to developing digital reverb algorithms, and it’s perhaps no surprise that Exponential Audio’s first two products are both artificial reverb generators. PhoenixVerb and R2 are both native, algorithmic designs that are available in all major plug-in formats on Mac OS and Windows, including the 64-bit AAX format used by Pro Tools 11. Both are authorised to a second-generation iLok key.

On first inspection, the new user might be forgiven for wondering exactly what the difference is between the two plug-ins. They share very similar parameter sets and user interfaces, with a common visual aesthetic that will probably divide opinion. I can’t say I found either plug-in particularly beautiful, and the quirky graphical stylings aren’t paired with much real innovation in terms of how the user interacts with the controls, but everything is at least perfectly clear and comprehensible. The plug-in window can’t be freely scaled, but clicking on a ‘+’ symbol doubles its every dimension, making it truly massive — too much so to be useful to most users, but ideal for the Hollywood composer squinting to inspect his humungous screen from the other side of his cavernous control room.

Both plug-ins feature a neat keyword-based preset system, which is a lot more flexible than the usual heirarchical arrangement of banks. Any preset can be assigned any number of keywords, so for example the ‘Zowie Chamber’ preset appears both under ‘Large Chamber’ and ‘Vocal’. All of the factory presets also come in five different variants, usually covering brighter or darker, and wider or narrower versions.

Out Of The Ashes

What separates PhoenixVerb and R2, it turns out, is not so much the way they’re used as the kind of sounds they’re designed to produce. Broadly speaking, PhoenixVerb caters to the need for ‘natural’-sounding reverbs that help to place sources convincingly into an acoustic space, while R2 is intended more for ‘character’ applications, where the reverb becomes a feature of the sound.

Anyone familiar with the conventions of algorithmic reverb design will find little to puzzle them in the basic PhoenixVerb parameter set. As you’d expect, you can balance the wet/dry mix and the relative levels of early reflections and reverb tail. There is also a global Reverb Time control, a Predelay setting and a single filter, which can be set to cut either the high or low frequencies at a slope of 6 or 12 dB per octave. Input and output levels are shown along with the EQ curve in a graph to the left, which can also optionally show a ‘live display’ (a rather simplified spectrogram of the output). 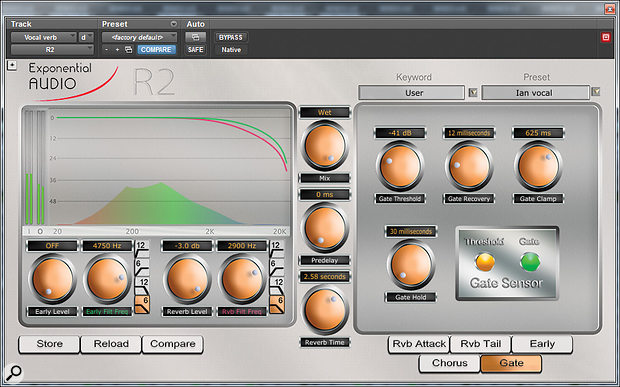 The core feature set of R2 is almost identical to that of PhoenixVerb, but the chorus and the simple but effective gate are unique to R2.

The right-hand side of the window can be switched between three panes which contain more detailed parameters relating to different sections of the algorithm. The Reverb Tail and Early reflections controls will mostly be familiar, especially if you’ve ever used a Lexicon reverb, but the Reverb Attack section is a little more unusual. According to the manual, this section “controls the way that audio energy enters the reverb tail”, though further explanation is not forthcoming. Anyway, it’s here that you decide whether your reverb should use Plate, Chamber or Hall algorithms, and determine the reflective characteristics of the simulated space using the Diffuser Size and Diffusion controls.

Three further controls seem to adjust the pattern of delay taps that is fed into the reverb tail algorithm. Envelope Time sets how far these are spaced apart in time, Envelope Attack sets the relative levels of the earlier and later ones, and Envelope Slope the extent to which the later ones are low-pass filtered. As ever, it’s easier to get a feel for what these controls do by trying them than by reading about them, but they’re all useful. The Envelope Attack control is particularly neat: as you turn it further to the right, the reverb begins to ‘bloom’ more slowly, becoming more distinct from the source sound without sounding artificial or obviously pre-delayed.

The basic feature set of R2 is almost identical, save that there are separate filters for the early reflections and the reverb tail.However, there are also two further pages of controls governing the behaviour of a built-in chorus and gate. The former, as you’d expect, adds (usually) subtle motion to the sound, in the vein of the modulation parameters in classic Lexicon hardware, while the latter is optimised for ’80s snare drum sounds and so forth.

You don’t need to spend a great deal of time browsing through the PhoenixVerb presets to realise that this is a very classy reverb indeed. It may be the more ‘natural’ of the two, but its naturalness is not the cold, hard realism of some convolution reverbs. Adjectives such as ‘lush’, ‘glossy’ and ‘smooth’ spring to mind to describe the way in which PhoenixVerb flatters and complements the source signals you put into it. Its plate and chamber algorithms are unlikely to be mistaken for the real thing any time soon, but like their counterparts in Lexicon reverbs, have their own special magic, enfolding and enriching voices and instruments in a way that makes you want to turn them up far too far! One of the hallmarks of a high-quality reverb is its capacity for producing small spaces that sound good, and PhoenixVerb passes this test with flying colours, with a wide selection of very useful ambiences and small rooms to go with its more expansive halls and plates.

Much of the above applies equally to R2, too, for whilst it is undoubtedly less delicate than PhoenixVerb, it could hardly be described as lo-fi. Inasmuch as R2 has a ‘vintage’ sound, it’s more Lexicon 480L than Great British Spring. It isn’t obviously noisy or distorted, and even when you crank up the chorus as far as it will go, it doesn’t push things into the realms of the queasy. However, the fundamental R2 sound is clearly different from PhoenixVerb, tending less to recede into the mix, yet at the same time, often leaving more room for other things. Artifacts such as cyclical repetition in the reverb tail are sometimes subtly audible, though only on exposed sources and when the reverb is high in the mix.

If I had to make one criticism of both plug-ins, it would be to point out that the EQ side of things can be limiting. It’s true that controls such as Envelope Slope and the diffusion parameters offer a good deal of control over the tone of the reverberation, but I’d have at least liked the option to apply both a high- and a low-pass filter.

Any good reverb will give good results on almost any source, and PhoenixVerb and R2 are both good reverbs, so there is a good deal of crossover between them in terms of applications. If you need to invisibly beef up the recorded ambience on an orchestral recording, PhoenixVerb would be the obvious choice, while those seeking authentic ‘80s gated snare sounds would naturally turn to R2 first. For the huge area between these extremes, however, both plug-ins will do an excellent job, albeit in slightly different ways. Not everyone will need both PhoenixVerb and R2, but once you’ve tried them, you may well find it hard to decide which one you can live without!

The obvious alternative to PhoenixVerb is Lexicon’s PCM Native Reverb bundle, which packages most of Lexicon’s current reverb algorithms in a series of plug-ins. Those seeking an alternative to the ‘vintage’ sound of R2 might want to consider Native Instruments’ Reverb Klassiks and ReLab’s 480L, both emulations of early high-end Lexicon hardware units.

As we went to press, Exponential Audio made available surround versions of both PhoenixVerb and R2. I wasn’t able to test these, but they look as though they would be invaluable for soundtrack and post-production work, catering as they do for every surround format under the sun, and featuring extensive balancing options to allow each channel’s reverb level to be set independently. Anyone working on large post projects with many different spot effects that need to be placed in different surround spaces will also appreciate the Dynamic Loading feature. This sets a threshold level below which the plug-in shuts down its processing, making it easier to guarantee a manageable CPU load throughout the project.

Exponential Audio may be a new company, but PhoenixVerb and R2 look set to provide strong competition to more established rivals.