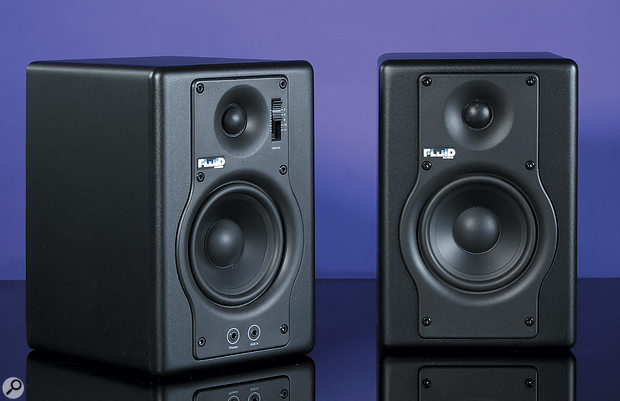 These compact and affordable monitors, from young US company Fluid Audio, turn in a surprisingly good performance.

Fluid Audio were founded by former JBL engineer and recording enthusiast Kevin Zuccaro. After a subsequent spell at Cerwin Vega working on hi-fi products, he moved on to managing Avid’s monitor division, designing their M-Audio monitors. In 2011, he left Avid to set up Fluid Audio. Kevin is the first to concede that monitor design is always a compromise between price and the technology that you would ideally use if price was not an issue. He tells us his approach is to look at each element in a monitor to see how it can be made to perform as well as possible at a specific price point, paying attention, not only, to voicing, but also to the design of the amplifiers, the port tube and the tweeter waveguide.

The compact F4s certainly meet the budget price requirement, and are well-suited to smaller home studios and general desktop requirements where 30W of power (in this case, Class A/B), overall, is sufficient. However, the specifications don’t make it clear whether this is per speaker or the combined power of both amplifiers. A passive 2.5kHz crossover divides the output from each amplifier between a four-inch paper-coned driver and a one-inch silk-dome tweeter, the latter being set into a waveguide that also time aligns the tweeter with the woofer by setting it back slightly behind the baffle. Both power amps are located in the left-hand speaker, with conventional speaker cable clips being used to link to the right-hand speaker via a length of included two-core cable.

The drivers, which are magnetically shielded, are mounted into a rear-ported MDF cabinet featuring a black vinyl foil finish, rounded corners and a custom-moulded driver plate that includes the dished section comprising the tweeter waveguide. Adhesive rubber isolation pads are also included with the speakers, which measure a compact 222 x 150 x 172 mm and weigh just 6.5kg each. Two TRS mini-jack sockets are fitted to the plate below the left-hand woofer, one acting as a headphone output (muting the speakers when connected) and the other as an aux input allowing MP3 players and suchlike to be connected directly via the front panel. A mini-jack cable is included for this purpose. 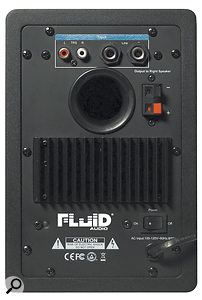 The left speaker houses the amps for both itself and the right speaker, the latter connecting via standard speaker-wire clips.

Rear-panel audio connection is via a pair of quarter-inch balanced TRS jacks or unbalanced RCA phonos (which are summed and so may be used simultaneously if the need arises) and a short level fader is fitted to the front panel of the left speaker. This provides accessible level control for when the user doesn’t have a separate monitor controller. No other controls are provided other than a power switch, and a tiny blue LED on the left-hand speaker acts as a power indicator. Mains power voltage is fixed but the speakers are available in either 220/230V or 110/220V versions, the mains lead being permanently fixed to the left-hand cabinet in either case. On our review sample, the mains plug was a moulded European two-pin type, which meant I had to use an adaptor plug.

An external, finned heat sink on the left speaker looks after amplifier cooling, and an automatic standby function on the amplifier (EU versions only) reduces power consumption when the monitors are not being used. No maximum SPL figure is given and the frequency response figure doesn’t specify whether it refers to the 3dB down points or not, so much of the evaluation of these speakers is necessarily subjective.

My first impression was that these little speakers sound a lot bigger than they actually are, with the bass end coming across as more solid and deep than you might expect. At lower listening levels, before the port really starts to kick in, the speakers deliver a plausible balance, with bass parts sounding full and reasonably even rather thanfavouring a specific note or group of notes. Push the level up, though, and the bass starts to sound somewhat overblown with a degree of smeary overhang — though that’s not surprising given the size of these speakers. Stuffing socks in the bass ports tightens up the lows to a useful degree when monitoring at higher levels, but much depends on where in the room you place the speakers and on how loud you intend to monitor. Proper isolation platforms would also help, as the included pads are very thin. Of course, the maximum clean level attainable is limited in comparison to larger monitors, both by the amplifier power and by the driver size, but if you’re working with the speakers right in front of you, they can deliver adequate volume while staying within their comfort zone.

In the mids and highs the balance feels decent enough, with the highs refraining from stridency, though when it comes to detail, there isn’t that sense of sharp focus we’ve come to expect from more sophisticated monitors, so you don’t get much of a three-dimensional sound stage. Left/right imaging is absolutely fine though. The performance of the F4s is pretty good for a small desktop speaker, and you could certainly work with them if you have to mix in a small space. Having that MP3 input makes it easy to compare your mixes with commercial recordings, while the inclusion of a headphone out jack will get you out of trouble if your recording system doesn’t have one.

There’s a surprising number of alternatives in this size and price range, most noticeably from Behringer, M-Audio, Tannoy, ESI, Alesis and Fostex, with slightly more costly alternatives from Presonus, KRK and Prodipe.

Kevin Zuccaro has managed to juggle the cost and quality compromises to offer a very usable little speaker that handles the lows better than you might expect. It is a budget speaker so you can’t expect it to be perfect, but it fights its corner strongly.