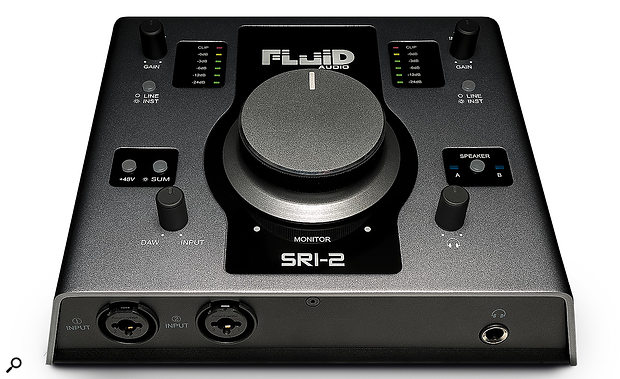 Solidly built and attractively priced, the Fluid Audio SRI‑2 combines the functions of a two‑channel recording interface and a basic monitor controller/headphone amp in a desktop package. It can run without drivers on Mac OS and a Windows driver is available to download. A firmware update for use with iOS devices is also available from the downloads section of the Fluid Audio website. In normal use the device is powered directly via a USB 2 connection, but a micro‑USB powering port is fitted so that the SRI‑2 can be externally powered from any USB power adaptor when used with an iOS device. Bundled with the package is a USB cable, a manual and a code to obtain a free copy of Cubasis LE DAW software, with versions available for Mac OS, Windows or iOS. Oddly, the manual contains no technical specifications and I couldn't find any on the Fluid Audio website either.

Built into a weighty aluminium shell, the SRI‑2 features two 'combi' XLR/jack inputs with globally switchable 48 Volt phantom power, a single headphone outlet and two sets of balanced speaker outputs on quarter-inch TRS jacks, with A/B speaker switching from the front panel. There's also a fixing point for a security cord to deter unauthorised removal. Each input channel has its own six-segment level meter and gain control, with switching for line or instrument use when using the jack input. All the buttons are illuminated in appropriate colours, there are illuminated blue marker lines on the pots, and the monitor control knob is a large and weighty affair with a rubbery periphery that feels extremely smooth and precise in use.

Operating at up to 24-bit/192kHz resolution, the SRI‑2 uses Class‑A circuitry in the mic preamps and includes a DAW/input mix knob to allow direct source monitoring to be mixed in with what comes back from the DAW for latency-free source monitoring while overdubbing. By default, the direct signal from channel 1 is only present in the left headphone (or speaker) output, and the input from channel 2 is only present in the right. This is ideal when working with a stereo input (and perhaps for performers who like to work with one earphone off), but for mono sources, it can be distracting. To compensate, the design includes a Sum button that puts both source inputs into the centre of the monitor mix. Sum doesn't mono anything coming back from the DAW.

At the back you'll find two pairs of balanced speaker outputs on quarter-inch jack sockets, a micro‑USB port for power, and a USB B port for connection to your computer or iOS device.

Given its price, the SRI‑2 feels very professional and well thought out. There are no level trims for the speaker outputs, but then most active speakers have on-board level controls anyway, so balancing the volumes of two connected sets of monitors shouldn't be a problem. The smaller knobs have a tactile rubbery feel to them and the weight of the device combined with its rubber feet keeps it stable on the desktop, even with two XLR cables plugged in.

Unlike the Audient iD14, which follows a similar desktop format and occupies the same price range, there's no option to add more inputs via ADAT lightpipe, but on the plus side there's the dual speaker switching option and that gloriously smooth control knob. I know some potential users have complained that there's only one headphone output, which can make life difficult when recording two performers at the same time, but that's a restriction shared by most small interfaces in this price bracket. And there's plenty of undistorted level available from the headphone output.

A speech recording test using a capacitor microphone produced clean results, and the gain controls behaved fairly progressively rather than having too much gain bunched up at one end of the pot's travel. Despite the lack of a spec sheet, nothing shows up in operation that the manufacturers might wish to hide.

At its heart this is a fairly basic interface, offering nothing out of the ordinary other than the dual speaker switching, but I think Fluid Audio have managed to deliver 'basic' with considerable style. I found the form factor of the unit to be perfect for the job in hand and in my view, given its pricing, this is one of the most professional-looking desktop interfaces of its kind that I've reviewed so far.