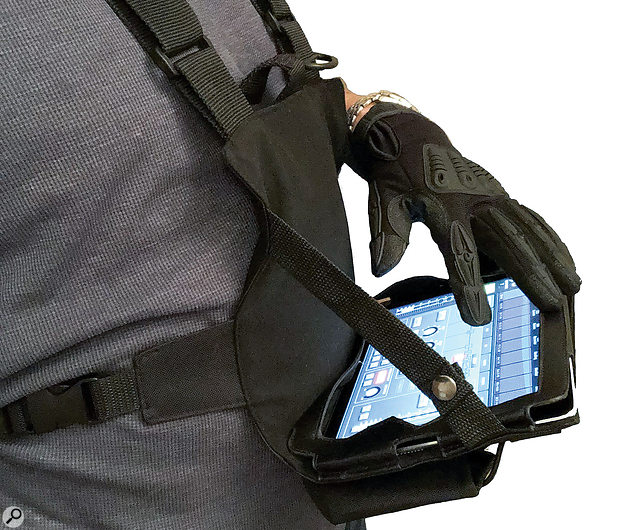 Brought to you by the company that made the Gig Gloves (a great set of protective gloves for stage hands, roadies and musicians who need to lug a lot of gear around: www.soundonsound.com/reviews/gig-gear-gig-gloves), the Two Hand Touch is a kind of Batman's utility belt for the live sound engineer who mixes from an iPad (remote control via iPad or other tablets is now supported by many modern digital mixers). It is worn at the front, in the manner of a harness, and supports the tablet so both of your hands are available for mixing. A hefty strap goes around the neck of the wearer, and an elasticated strap around the waist keeps the case pulled close to the body. The construction of the case is certainly well up to the rigours of live sound — in fact I'd say that it could be described as almost 'military grade'. 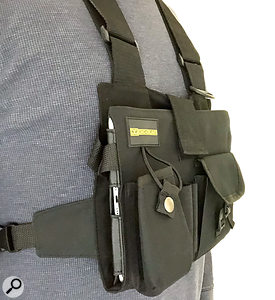 Tablets come in different sizes, of course, but the majority can be accommodated by the two models that are currently on offer. The Two Hand Touch 9 handles most standard tablets up to a 9.7‑inch iPad, while the Two Hand Touch 12 can accommodate an iPad Pro. Elastic straps hold the tablet in place and are configured to hold anything from a phone upwards. When closed, the case flattens close to the body and is held shut by a hefty Velcro fastener. But this is not just a case for holding a tablet — on the front of the device are two closable pockets and two further recesses for holding tools, adaptors, connectors, a mini torch and other such problem-solving gadgets.

With the case open, the iPad section hangs horizontally on two straps, which are joined in the middle using robust pop fasteners. Access to the iPad is inevitably partially impeded by the side straps that hold the 'tray' in place, and you may find it easier to thread your hands under these for mixing purposes. If you prefer to mix on your lap or on a table, these straps can be un-popped so that the whole assembly lays flat, and when closed your tablet is well-protected. Overall, the Two Hand Touch is a well‑made and practical option for the live‑sound engineer who needs to be able to use both hands while operating a tablet.