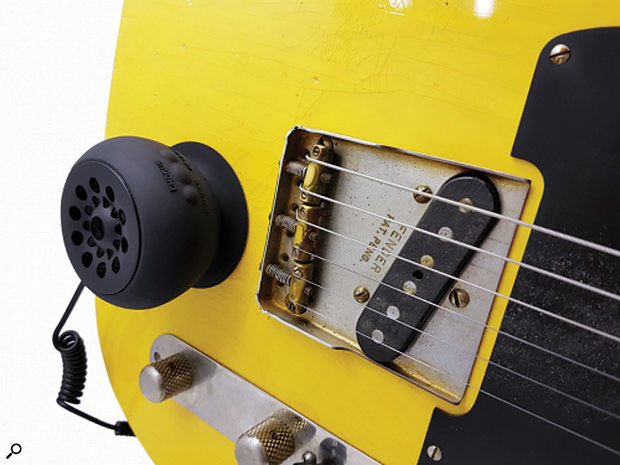 The Strum Buddy is one of those rare small and affordable gadgets that might actually see some long-term use at my place! Essentially, it’s a miniature solid-state guitar amp with built-in speaker. The internal lithium-ion battery can be recharged via USB, and a suitable cable is provided. A full charge should allow 3.5 hours’ playing time (I played for a couple of hours with no problems, before getting tired of putting that claim to the test!).

The Strum Buddy attaches to the surface of your guitar’s body via a suction cup, and did so firmly for me — it always stayed put on my guitar for as long as I wanted it to. A 3.5mm input jack accepts the guitar signal via the provided 3.5mm-to-quarter-inch coiled jack cable. Physically, the Strum Buddy really is tiny: the outer casing, made of ABS-plastic with a rubberised coating, measures only 70 x 40 mm, and the neodymium-magnet speaker is 40mm across. There are two basic sounds to choose from — clean and overdriven — and there’s a reverb (which sounds rather more like a delay than the spring/plate reverb I’d anticipated), and a chorus effect. These are all accessed by buttons on one side of the device, which appear as neat bumps in the rubber finish; you’ll soon get used to orienting the Strum Buddy the right way around to make accessing these buttons easy.

Obviously, no amp/speaker combo of this sort of size is going to compete with your favourite valve amp/cab when it comes to achieving ‘personal tone nirvana’, but that’s not really the point. This device is about making practice and rehearsals easy, and it does that well. The clean sound was nice enough for practice sessions — better than, say, various modelling mini headphone amps, such as the Vox Amplugs. Moreover, I found it much easier to play through the on-board speaker than when using headphones and an amp sim. (There’s something about headphones that’s just a bit off-putting for me when playing guitar).

It’s quiet enough that it won’t disturb sleeping children in the next room while you’re practising, but can be just loud enough to be useful. You could, for example, use it to balance your electric guitar at an otherwise all-acoustic rehearsal. And that’s really why I like it — it’s a superb accessory for late-night practice, or for the sort of ‘quiet rehearsal’ I’ve often done with bandmates when working out the finer details of arrangements for a gig. I imagine it would work well in a classroom setting too.

The distorted sound was a bit heavy-handed for my taste, and when you turn the thing up to full volume on the distorted channel the speaker starts to break up, but get the gain right and it does a passable impression. On the whole, I’d prefer more options when it comes to the distortion and reverb, and I could imagine a very nice ‘plus’ version, with more adjustable parameters! But, as it stands, this thing is fun, useful and incredibly easy to use.