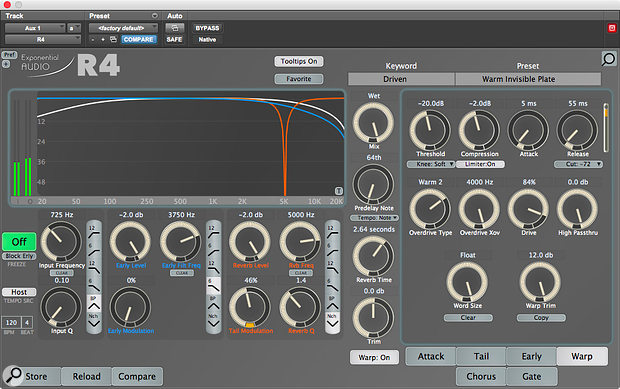 Exponential Audio have hot-rodded their ‘character’ reverb, and the results are even more characterful!

Founded by former Lexicon engineer Michael Carnes, Exponential Audio offer a range of algorithmic reverb plug-ins to suit most uses and pockets. In the classic Lexicon tradition, they don’t generate perfect simulations of real acoustic spaces, or minutely detailed recreations of some hallowed EMT plate. Instead, the focus is on creating artificial reverberation that just works in a mix, and my own mixes have certainly benefitted from the attentions of their R2 and PhoenixVerb plug-ins. These complement one another nicely, with R2 offering a little ‘vintage digital’ character to contrast with PhoenixVerb’s cleaner and more modern sound.

Since R2 and PhoenixVerb were reviewed in SOS March 2014, Exponential have been building on them to create another, more versatile pair of algorithmic reverbs. Nimbus is, at heart, a souped-up PhoenixVerb, while the latest release is R4, a development of R2 which takes its basic concept to new places. Like all of the company’s products, it’s available for Mac OS and Windows in all the usual native formats, and is authorised using the iLok system.

Compared with standard algorithmic reverbs, the R2 feature set was lacking only in one area: it offered only a single band of EQ. Michael Carnes has addressed this restriction in R4, and in doing so, has turned the EQ section into a powerful creative tool. And that’s not all: he’s also added a dynamics processor and an overdrive, an additional Hall algorithm, the ability to synchronise pre-delay and reverb delay to host tempo, a gate, and a new ‘tail suppression circuit’, which enables some interesting ducking effects.

That new and improved EQ section now features three bands. Each of these offers an identical selection of high-pass, low-pass, band-pass and notch filters, and each is hard-wired to a particular section of the algorithm: respectively, the input signal, the early reflections and the tail. So, although there’s no parametric equalisation, and it isn’t possible to apply separate high- and low-pass filter curves at the same point in the chain, you can achieve much the same results more quickly by applying a band-pass filter with a broad Q setting.

The usefulness of a notch filter in this context might seem questionable until you investigate some of the presets that employ one. R2 already featured a useful selection of modulation features, and in R4, these have been extended. As a result, it’s now possible to independently modulate the EQ bands wired into the early reflections and tail, and using a slow LFO to move a notch filter up and down within the tail turns out to be a very neat way of introducing movement into the sound. This has something of the character of phasing and flanging, but is more subtle, and doesn’t undermine the core sound of the reverb in the same way.

The rate at which the modulating LFOs move is set using Early and Late Rate controls in the Chorus tab, and if you’re using the new Hall 2 algorithm, you’ll also see Density Rate and Mod parameters here. Depending on what sort of filter type you select, these new modulation features run the gamut from barely audible shimmer to obvious cyclical swirling effects, and it’s often surprising how much modulation you can introduce before it becomes noticeable in the context of a mix.

Many of the other new features Exponential Audio have added in R4 are housed in an editing page called Warp, which can be bypassed to conserve CPU resources if you don’t need its palette of sound-mangling options. When active, the Warp page frogmarches the wet output of the reverb generator through a fixed processing chain which offers a fairly conventional compressor (with a downward expander to avoid bringing up noise), a choice of three flavours of overdrive, word-length reduction and an overall gain trim control. If things get too fierce at the top end, a crossover control lets you apply the distortion only to audio below a chosen frequency, and if that makes the sound a little too dark, a Hi Passthru dial can be used to bleed a portion of the high-frequency content back into the overdrive too.

The idea of applying compression and distortion to reverb might seem an odd one to some, but in practice, it can be very effective, especially when you’re trying to create a vintage feel, or you need to sculpt an individual reverb to suit a specific source such as a snare drum. Having the tools to do so built into the reverb plug-in makes obvious sense, not only because they’re conveniently at hand, but because they can be tailored to the task in a way that conventional saturation plug-ins usually aren’t. The word-length reduction doesn’t go below 12-bit, but since it affects all processing in the plug-in, this is plenty gritty enough!

Another new editing page is host to a simple but very effective gate. Exponential’s choice of terminology is a little unusual, but once you realise that Gate Clamp and Gate Recovery are, respectively, release and attack time controls, there’s little to catch you out. Once again, the obvious uses for this feature are mostly on drums, and it proves straightforward to set up and easy to control.

A more unusual dynamic development is heralded by the addition of two parameters to the Tail editing page named Tail Suppress and Tail Recovery. Together, these enable the output of R4 to be ‘ducked’ using either the input signal, the output signal or a blend of the two as a key source. Ducking is a relatively common feature on delay effects, and although I don’t recall encountering it before on a reverb, it turns out to be every bit as useful here. The obvious application is on a lead vocal, where you can make the reverb swell at the end of each line without having it swamp the dry sound or undermine intelligibility during a phrase.

Also new is the ability to sync parameters to host tempo. The most obviously useful of these is pre-delay, but there’s also a separate delay parameter that affects only the tail; so you can, if you wish, generate a burst of early reflections, then a gap, with the main reverb tail following on after a musically relevant time interval. Finally, I should mention R4’s Freeze control, which endlessly recirculates the current input signal to create an infinitely sustaining, pad-like wall of sound.

In appearance, and in most of its core parameters, R4 looks and feels like an expanded version of R2. Its own preset library includes all of R2’s presets, and provided you stick to the common parameters, it can be used in much the same way, with much the same results. Exponential say that you won’t get identical results from the two, but R4 is certainly close enough that I can’t imagine anyone needing both.

However, you don’t have to spend very long playing with the new features to realise that this really isn’t just more of the same. R2 is, at heart, a pretty conventional general-purpose algorithmic reverb, albeit a very good one, which wears its ‘vintage digital’ character lightly; you have to try quite hard to coax anything very weird or special-effecty from it. R4 can do all the same things, but once you start using the new features in earnest, R2’s core functionality feels like quite a contained subset of what’s possible.

Perhaps the most impressive thing about R4 is the way in which all of these new features pull together towards the same common goal of creating reverb that works in a mix. No matter how unnatural things sound when you solo the reverb return, when heard in context, R4 always seems to frame its sources just right. It can add dimension and grandeur when called upon to do so; it can be edgy and aggressive when it needs to be; richness and density are available on demand; and its short rooms and ambiences can enhance a source without even suggesting ‘reverberation’ to the ear. In designing R4, Michael Carnes has paid close attention to the creative ways in which real-world rock and pop engineers are using reverb, and has come up with something that ticks all the right boxes.

The only other reverb I know of that incorporates saturation and compression is Overloud’s Rematrix, and although this is a convolution reverb rather than an algorithmic design, it’s definitely targeted at the same sort of role in which you might use R4. There are also numerous other plug-ins that offer a nod to the vintage Lexicon sound, including Lexicon’s own PCM Native Bundle, NI’s Reverb Klassiks and Relab’s LX480.

If you think of reverb primarily as a tool to make your mixes sound better, rather than a realistic recreation of an acoustic space, R4 could be the plug-in you’ve been waiting for!