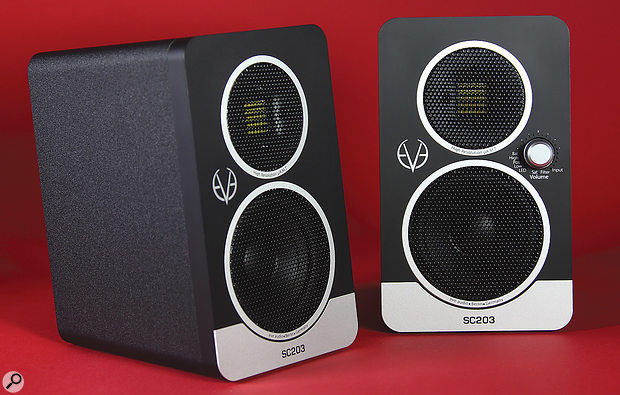 Eve have taken the technology from their existing monitors and shrunk it down to produce these diminutive desktop speakers.

In most project studios, two–way monitors tend to have woofers in the five– to eight–inch diameter range, depending on the room size, but for desktop applications a smaller speaker may be more appropriate. That’s where Eve Audio are aiming the SC203, but despite its small size — just 116 x 190 x 134 mm (WDH) it still packs quite a punch, with a maximum SPL capability of 94dB, which is louder than comfortable when they are on the desk right in front of you! A statement on the rear of the cabinet, which has nicely rounded corners and a textured black finish, tells us that final assembly and testing is carried out in Germany, which suggests that much of the parts manufacture is done elsewhere in order to keep costs down.

The SC203 is actually a master/slave two–way active system, which means that all the electronic circuitry is housed in one of the speakers (the right speaker is the master), and then connected to the other via a four–core cable to provide separate feeds to the woofer and tweeter. This is a flat ribbon–style cable around 1.5 metres long with locking connectors at either end. A 3.5mm stereo mini-jack to dual RCA phono cable is also included for connecting MP3 players and suchlike.

Power comes from an external switch–mode power supply block, which is equipped with a two–pin mains cable. This is my only slight concern, as in a laptop–based system you might find yourself with no mains ground connection whatsoever, which can lead to noise problems when recording electric guitars. Ideally you’d find somewhere to attach an earth cable to provide a single grounding point for the system. (Safe grounding mains plugs are available for this purpose, in which only the ground pin is metal and the other two are plastic.)

Each speaker comes with an orange rubbery wedge or FlexiPad for mounting and angling the speakers (0 or 15 degrees upward — they’re angled 7.5 degrees upwards without the pad) while also decoupling them from the desk surface. Alternatively you can use an optional mounting adaptor to fix them to a standard mic stand with a 3/8–inch thread. There’s also a wall–mount adaptor kit available.

In common with the larger Eve Audio designs, the tweeter is an Air Motion Transducer or AMT, more commonly (but less accurately) referred to as a folded ribbon. The AMT tweeter used in this particular model is a new neodymium–powered design called the AMT, which has around half the surface area of the AMTs used in Eve’s larger monitors. Crossed over at 4.8kHz, this feeds an integrated waveguide to match its dispersion pattern to that of the woofer at the crossover frequency. Both drivers are protected by fixed circular metal grilles.

With a system such as this one, where the woofer is only three inches or 75mm in diameter, the cone needs to travel over a fair distance to produce a worthwhile SPL at low frequencies. The woofer used here has a one–inch voice coil which is 16mm long (I love the way the audio industry mixes metric and imperial units!), allowing an excursion of 5mm either side of centre. The cone material is a specially developed multi–layer, coated paper. A large magnet and a basket designed to allow maximum airflow completes the picture.

Rather than use a conventional cabinet port, the SC203 is fitted with a rear–mounted passive radiator, which looks rather like a speaker similar in size to the woofer but with no voice coil or magnet. This provides the necessary cabinet tuning, but one advantage of the passive radiator over a conventional port is that at frequencies below that to which the cabinet is tuned, you don’t lose the air loading on the woofer cone so it is less likely to sustain damage or to generate excessive distortion from over–excursion. Another benefit is that port wind noise is eliminated. In this case the lower frequency response limit is 62Hz (–3dB) — an impressively low figure for such a tiny speaker given that the energy peak in most kick drums is in the 70 to 90 Hz range. The upper limit is specified as 21kHz. 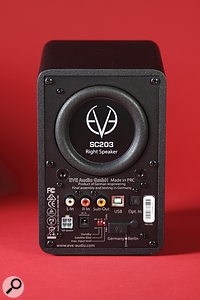 The rear panel houses the passive radiator, as well as the analogue (phono) and digital (Toslink or USB) inputs.A feature common to Eve’s monitors is the use of DSP to handle crossover, voicing and protection duties. Control is via a push–and–turn encoder surrounded by tiny orange LEDs, a system also used on the larger Eve monitors, providing access to volume, the high– and low–shelf filter settings (3kHz and 300Hz), input source and even how the LEDs behave when the volume setting is being displayed. Though there are four volume display options, I feel quite happy with the default setting where more LEDs light as the volume is increased.

There’s also a choice of voicings for desk or console mounting if the flat setting is not appropriate. To change settings you press the knob to step through the options printed around the control, at which point the LED next to that function will flash. Pressing again selects the function for adjustment and the LED remains steady. At that point turning the knob adjusts the selected function, and the orange LEDs show the selection or value as appropriate. It is advisable to keep the manual on hand as some of the options, such as the input source names, are not printed on the front panel so you need the manual to show you which LEDs should be lit. A small laminated card with this info on it wouldn’t have gone amiss.

On the electronics side, each driver is fed from its own 30 Watt Class–D amplifier, of which there are four in total. The inputs can be analogue on RCA phonos, or digital via optical Toslink or USB (a USB cable is included). There’s also the option to add a subwoofer to extend the range of the system, and Eve have thoughtfully provided a subwoofer output that follows the volume setting on the SC203s. A three–bank DIP switch on the back of the master speaker sets the low–end filters to 80Hz for use in a sub–plus–satellite configuration, as well as offering a choice of two input sensitivities and an automatic standby power–down option that kicks in after 10 minutes of inactivity. Pressing and holding the control knob for around three seconds also enters standby mode via a graceful fade, and then a second press wakes up the speakers and fades the sound back in. Conversion is 24–bit at 192kHz using a Cirrus Logic converter chip, and the DSP output drives directly into the Class–D amplifiers. The digital inputs bypass the converter.

Starting with an analogue input fed via the RCA inputs, I was genuinely surprised at how mature these little speakers sound. Highs are crisp and open–sounding, as expected from this style of tweeter, the mids are clean and lively... and the lows are rather better than I expected! With smaller cabinets, the bass tuning invariably results in a slightly ‘plummy’ bass sound, and while that is evident here too, it’s not to an excessive degree. In subjective terms the bass end is fat and warm but it doesn’t lose too much definition, as is often the case with less well–designed small speakers. You don’t get the same chest–wobbling lows that a large monitor delivers, but at the same time there’s no sense that anything important is missing — kick drums and bass guitars still sound solid and well defined.

Having a choice of inputs also makes sense as the USB connection can be fed directly from a laptop. The SC203s showed up in Logic Pro as an available output device with no need for drivers, and they worked right away. Given that these speakers use digital processing and Class–D power amps, going via USB cuts out an unnecessary stage of A/D conversion, though subjectively I couldn’t hear any difference in quality between the analogue and digital inputs.

Overall, then, the SC203s are excellent desktop speakers, given their compact format, though such quality comes at a price and for the same money or less you could buy some very capable five–inch active monitors that would still work well as desktop speakers. If you do need something this compact though, the SC203s have few rivals, other than perhaps the Genelec 6010A models, which are similarly priced.

If a small footprint is essential, the SC203s have much to recommend them, and the choice of inputs allows easy integration with just about any desktop audio system.