E-H's overdrive pedal uses MOSFETs as non-linear elements to create distortion, and actually performs as well as many boutique pedals despite being very modestly priced.

Housed in a compact pedal format, the OD Glove uses MOSFETs as non-linear elements to create distortion, but it’s unusual in that, although the power always comes from a 9V battery or external PSU, it’s possible to flip a slide-switch inside the case that doubles the internal voltage to produce more headroom, the effect of which is most noticeable when the pedal is used towards the cleaner end of its range. Note that the power supply voltage must not exceed 10V — the higher voltage is generated internally. The standard current draw is around 5mA but increases when the 18V setting is used. 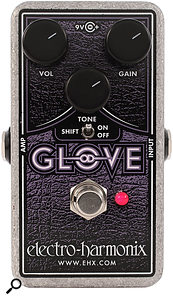 Featuring a true-bypass footswitch with status LED, the pedal also has three knobs to adjust gain, volume and tone, plus a small switch to bring in ’Tone Shift’. That’s hardly a revolutionary format, but what is surprising about this pedal is its gain range. At lower drive settings the pedal behaves almost as a clean boost, retaining the natural tone of the instrument, though the Tone knob lets you either darken or brighten the sound to taste. If you engage the Tone Shift switch, the high mids are boosted and there’s an increase of a few decibels in overall level.

As the Gain control is advanced, the sound progresses through a mild bluesy break-up to a more saturated rock sound that balances bite and attitude with the ability to maintain note definition, both on solo lines and chords. It also retains a sensible tonal balance rather than getting too mid-heavy, as some pedals seem to do. At the top of the drive range you’re well into Billy Gibbons throaty grind territory. Switching to the 18V setting reduces the sense of compression and sounds a little more open but you really need to try both settings with your own guitar and amp to see which gives the best subjective result.

One reason for focusing on this particular overdrive pedal is that it actually performs as well as many boutique pedals despite being very modestly priced. At lower gain settings it can be used in much the same way you might use a Fulltone OCD — although the tonal character isn’t exactly the same, it is broadly similar. It’s wide gain range is also worthy of note as most ‘cleanish’ boost pedals can’t go on to produce as much drive as this one does at maximum. In practical terms then, the OD Glove enables you to cover most boost and overdrive requirements in a single pedal. The level of background noise is low given the amount of gain available and, in the studio, putting an OD Glove pedal before a modelled amp plug-in can produce a more musically satisfying result than relying entirely on digital emulations.