Of all the record producers and engineers I’ve interviewed over the years, few impressed me as much as Joey Sturgis, who demonstrated a remarkable attention to detail while remaining strangely laid back, so when I heard that he was the Executive Producer of Drumforge I was very keen to take a look at the product.

Joey, who started out as a drummer, teamed up with Joel Wanasek and Joe Wohlitz to create the 25GB library of samples, with the aim of producing something that would “sound great in all productions by transcending all genres”. To do this they embarked on a recording process that would leave the end user with plenty of options to work with from within their chosen sampler. Compatible products include SS Trigger 1 and 2, Wavemachine Labs Drumagog 5, and NI Kontakt v4.22 or higher, and for this review I used Kontakt v5.3.1.37. 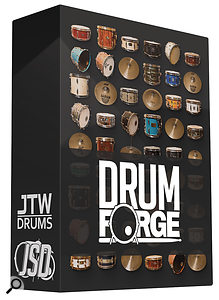 Unlike products such as those in Native Instruments’ Abbey Road series, or the many offerings from Drumdrops, Drumforge does not house its kits within a single interface and is, for that reason, not quite as immediate to operate. Instead, it takes a rather different approach which requires the user to put in a bit of effort to build their own custom kits from multiple interfaces. What’s more, there is no global mixer or effects chain, as is the case with the products mentioned above, and so the user has to attenuate each instrument interface relative to the others, and then use the facilities of a DAW to add effects and further processing.

What the user does get, however, is control over the individual mic recordings of each drum, and the ability to mix them relative to one another. Each mic is given its own fader, polarity reverse switch and sustain attenuator, and these appear on a virtual mixer.

In terms of miking, the team customised their setup to best suit each element of the kit. The cymbals were tackled with a spot mic, a room mic and a pair of overheads (switchable from X-Y to a spaced pair configuration), while four mics were used on toms, six on snares, (including two overheads, one room and three different spots) and as many as seven on the kicks. According to the Drumforge team, kick drum tones vary from one production to another more than any other drum, so they used three direct mics to cover all bases. Drumforge’s range of drums and cymbals, which includes many vintage examples alongside more contemporary instruments, is pretty big, and that (coupled with the multi-mic mixing options), gives the user an incredible level of tonal flexibility.

Overall the recording quality is excellent, and the velocity variations have been recorded very carefully so that it’s possible to create some pretty realistic performances. Apparently the team elected to keep processing to a minimum so that it is left to the end user to decide how to treat the samples, which for me is definitely the right way to go. That said, when it was necessary to pile on compression — to bring up the room sound, for example — they weren’t afraid to do so.

In summary, Drumforge is a very powerful and flexible tool, which will appeal to composers who are willing to put in a little effort to achieve the very best results. Tom Flint