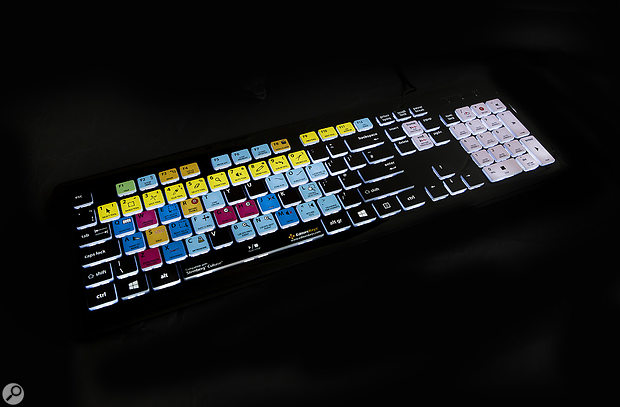 Despite the abundance of right-click menus, hardware control surfaces and tablet apps for accessing the deeper-lying functions of Cubase, a detailed knowledge of its keyboard shortcuts remains essential if you’re to establish an efficient workflow. Editors Keys have long been creating custom QWERTY keyboards and keyboard sticker sets for various audio, video, photography and other creative software, in which the keys are marked with both their normal QWERTY function and the shortcut to which that key is assigned in the specific application. If you’re new to a complex piece of software such as Cubase, Pro Tools, Logic, Premiere, Final Cut Pro and so on, these keyboards can be really handy, both in terms of learning new shortcuts and in helping you edit and navigate around your project much faster.

In the latest version of their keyboard, Editors Keys have added backlighting, which should be a boon to anyone who likes to burn the midnight oil or finds themselves having to slave away in a dimly lit studio, or control their DAW for an on-stage performance. They sent me the Cubase version for evaluation and when I received it, it was a Windows-only model, but as I was writing up this review a Mac version became available. Other than compatibility with a different operating system, the spec is pretty much identical.

The first thing to say, if you’re familiar with the Editors Keys devices, is that the backlighting makes the keyboard far more useful than the originals. As intended, it just makes things easier to see. It’s not so bright as to be a major distraction or strain your eyes, but makes things easy to see in pretty much any environment.

One minor point of criticism is that no instructions came with the keyboard and it wasn’t immediately obvious how to switch the backlighting on/off! It turned out that the scroll lock is used for this — and Editors Keys tell me they’ve now updated the legend to make this clear. They also plan to add a brightness control on future versions. That’s a nice touch, though not essential.

The only other thing to consider is that, unlike Pro Tools, in which the keyboard shortcuts are fixed, Cubase has a very flexible system that allows you to reassign keys to different shortcuts, to create macros and assign them to keys, and so on. When using something like the Editors Keys system, you’re going to find that you want to stick to using the default shortcuts. On the plus side, having all those shortcuts immediately visible can make you aware of a whole host of useful functions that had not previously grabbed your attention. If you’re not one of those who habitually tinkers with your shortcut-key assignments, this keyboard could make Cubase much more intuitive!

About $125, based on exchange rates when going to press.