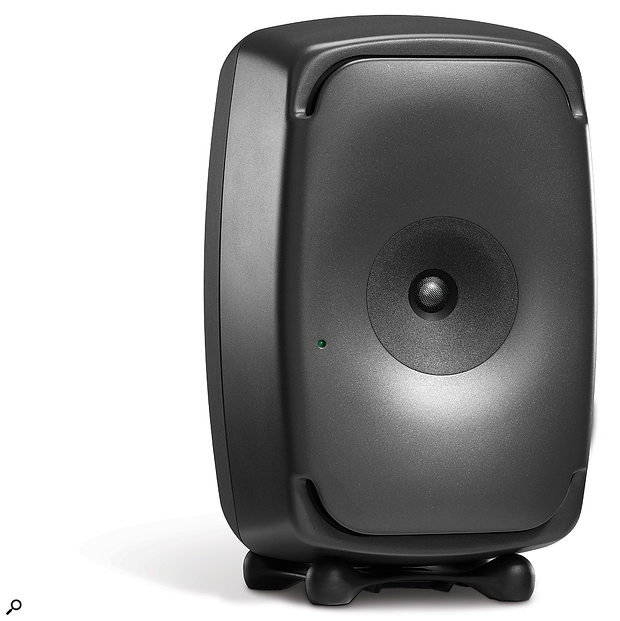 Genelec take an unusual approach to speaker design for this distinctive three–way monitor.

Back in the 1980s, when I started producing records for my own and other labels, I came across Genelec’s 1024A active three–way monitor, and that unit’s ability to deliver transients with total control and no apparent effort across its entire 30Hz–20kHz bandwidth remains my internal reference to this day. In the years since, I have come across very few monitors that, to my ears, have equalled (let alone surpassed) that early Genelec, and those that did were, like the 1024A, well outside my budget.

Oblivious to my budgetary woes, Genelec continued to develop the 1024A through B and C versions until it was superceded by the 1038A in 1992. That monitor, updated to the 1038B in 2003, remains in the company’s three–way product line to this day, alongside the more recently developed 1237A, 1238A and their larger siblings. Of course, it’s a long time since Genelec’s reputation rested on rectangular wooden boxes but, since its introduction in 2010, only the highly–regarded 8260A has carried the three–way banner among the die–cast aluminium enclosures that are Genelec’s stock–in–trade these days.

Now, with the release of the 8351A ‘Smart Active Monitor’, Genelec have not only managed to develop a revolutionary approach to the art of three–way monitor design, but they’ve also managed to scratch all of my monitor itches at once.

The first thing that you’ll notice about the 8351A is that the Directivity Control Waveguide (DCW) that is a defining feature of Genelec’s Minimum Diffraction Enclosures (MDE) has ‘expanded’, occupying the entire front of the enclosure to become the MaxDCW. At the waveguide’s centre sits a Minimum Diffraction Coaxial (MDC) driver arrangement, comprising a five–inch mid–range driver and a 0.75–inch metal–dome tweeter — a combination first seen on the 8260A.

What you won’t see on the front of the 8351A is a woofer — and no, there isn’t one underneath or on top. Lurking behind each end of the MaxDCW you’ll find a slot that houses one of the 8351A’s twin 8.5 x 4–inch Acoustically Concealed Woofers (ACW). The positioning of the twin woofers, in conjunction with the MaxDCW and the MDC midrange/tweeter, makes the 8351A an ‘acoustically–coaxial’ monitor whose controlled directivity over a wide bandwidth enable it to be used both in vertical and horizontal alignments.

The 8351A can deliver 110dB at one metre, with power coming from a Genelec–designed combination of Class–D amplifiers (150W on the woofer and 120W on the midrange), and a discrete–component, 90W Class–A/B amplifier that drives the tweeter. The frequency bandwidth is 38Hz — 21kHz (±1.5dB), with the –6dB points being at 32Hz and 40kHz. Crossover points are 490Hz and 2.6kHz.

Around the back, in addition to the bass reflex port, you’ll see a panel housing XLR connectors for both balanced analogue and digital AES3 inputs, together with twin RJ45 network connectors for the Genelec Loudspeaker Manager (GLM) system. The GLM system allows you to remotely control the volume level of any monitor in the SAM (Smart Active Monitor) range and, more importantly, Genelec’s AutoCal software also allows you to quickly and simply calibrate a SAM monitor system to the room that you are working in. This helps ensure that you have a consistent monitor environment to work in, even in challenging acoustics. You can find more details of the GLM system and its operation in my review of Genelec’s 8320A and 8330A (www.soundonsound.com/sos/may15/articles/genelec–apm.htm).

Also on the back panel are two banks of DIP switches, one of which sets up the 8351’s inputs and also enables you to individually mute woofer and mid–range/HF drivers, whilst the other adjusts the monitor’s frequency response to help compensate for its acoustic environment.

My initial listening tests were carried out after running in the 8351A for around 12 hours, and before carrying out any calibration. To my ears, Genelec’s MDE loudspeakers share a characteristic overall sound quality — detailed, essentially neutral, with a slightly forward presentation. The 8351A has the familiar Genelec detail and neutrality, but the slightly forward presentation seems to have stepped back into line, and my overall impression was of a loudspeaker that was neither imposing its character on, nor getting in the way of, the music that it was reproducing.

As you’d anticipate from a high–level three–way design, the mid range is very detailed, and the 8351As sounded really clear and open overall. This detailed mid range, allied with the high–performance co–axial tweeter, gave a superb stereo image that sat solidly in the space between the speakers. With well–recorded material, this soundstage was not only wide and full of detail, but also gave a real sense of depth and space.

However, the real eye–opener was the low–frequency performance and extension. The 8351A isn’t all that large, but the control and depth of the bass that was being produced really stood out across a wide range of musical genres. At EDM volume levels, synthesized low–frequency sounds were reproduced with an impressive level of transient detail alongside the mandatory chest–kicking thump and, back in the real instrument world, the 8351A excelled at delivering the necessary definition between bass guitar and bass drum. If you do the maths you’ll find that the combined surface area of the 8351A’s two oval woofers approaches that of a 10–inch driver, and it seems to me that Genelec’s new approach to twin–transducer topography in the low–frequency arena really pays off when it comes to producing clearly defined and delineated bass.

The symmetrical positioning of the waveguides also fits well with the co–axial driver and, to my ears at least, justifies Genelec’s characterisation of the 8351A as being ‘acoustically coaxial’. One added benefit of this construction is that it creates a sizeable sweet spot in both vertical or horizontal orientations. 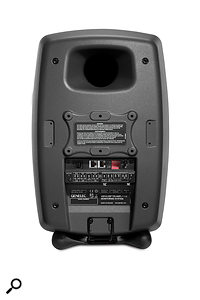 The rear panel houses the analogue and digital input connectors, as well as the Ethernot ports that allow each speaker to be connected to a SAM network, and DIP switches that allow for manual room–placement compensation.I spent a lot of time listening to tracks that I know well alongside newer tracks that I was exploring for the first time, and the 8351A never ceased to draw me into the music whilst still delivering the detail that allowed me to analyse what was going on. To give you an idea of the level of detail that I found in the 8351A, there’s an acapella ensemble vocal track by the 1970s French band Malicorne (recorded in Studio Acousti in Paris on a Neve/Studer combination) that I’ve listened to many times over the years without realising that a background female vocal harmony line that I thought was being faded up during the chorus actually starts with one voice, followed by a unison second voice fading in and finally a third unison line fades in to join the first two.

The Genelec 8351A is a significant move upwards in quality compared to its similarly–styled siblings. By any measure, the 8351A achieves a level of performance that more than justifies its price. Its outstanding stereo imagery, clarity, resolution and transparency together with its transient delivery, bass detail and extension prove, to my ears, that this innovative three–way, coaxial monitor design really delivers the goods.

Personally, much though I love vintage Tannoys and yearn for a Genelec 1024A, I do realise that we are currently living in a golden age of monitoring where performance levels are higher than they have ever been and where value for money has never been better. The 8351A is a perfect exemplar of this age and, should you be looking for a high–end monitor system and in the fortunate position of having a budget that corresponds to its price, it is a monitor that you must audition.

At this price/performance level you’ll almost certainly also be considering three–way options from, among others, Adam, Barefoot, Dynaudio, Eve, Focal and Quested.

A surprisingly compact three–way, ‘acoustically coaxial’ monitor that delivers an extremely high level of performance a competitive price. Its innovative twin–woofer topology and coaxial mid–range/tweeter driver produce exemplary levels of detail, transparency, transient response and bass extension, across a wide sweet spot and in both vertical and horizontal orientations.