Genelec’s high‑tech The Ones series has a new flagship model. We fire it up...

Back in 2014, Genelec introduced the 8351A, the first product in their ‘The Ones’ series of compact, coaxial, three‑way monitors. The range introduced a unique new physical format and a stunning level of audio performance, as I noted in my August 2015 review. The release of the 8351A (now updated with more powerful amplifiers and revised drivers to become the current 8351B) was followed a couple of years later by two smaller ‘mini‑me’ siblings, the 8331A and 8341A, both of which were reviewed by Hugh Robjohns in SOS July 2017. More recently, Genelec have released the new flagship of the range, the 8361A, which replaces the 8260 in the company’s product line. The newcomer retains the overall physical dimensions of the 8260 and so becomes the largest, heaviest, and most powerful of all The Ones. 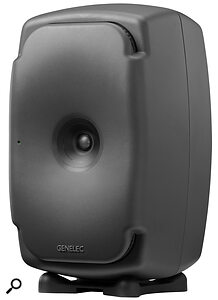 As with the other Ones, the entire front of the 8361A’s die‑cast aluminium Minimum Diffraction Enclosure (MDE) forms what Genelec call their Directivity Control Waveguide (DCW), the whole being designed to produce a wide listening area with well‑controlled directivity, a flat frequency response, accurate sound reproduction and precise stereo imaging.

In the middle of the DCW sits a new Minimum Diffraction Coaxial (MDC) driver, with a 130mm midrange driver shaped at its inner edge to form a waveguide for its coaxial 25mm metal‑dome tweeter. It’s also designed to integrate seamlessly at its outer edge into the DCW. Recessed behind either end of the DCW are two obround (263 x 137mm) reflex‑loaded woofers, which Genelec call Acoustically Concealed Woofers (ACW).

The shared reflex duct terminates in a wide flare on the rear of the 8361A’s enclosure, which is situated just above the unit’s audio connectors. These comprise XLR input connectors for both balanced analogue and AES3 digital audio signals, plus an XLR output connector to loop the AES3 signal to another monitor. The speaker’s control panel houses 14 rear‑mounted DIP switches, arranged in two banks of seven, which configure the monitor’s DSP and handle various caretaking duties. 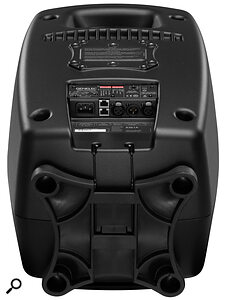 Of the right‑hand bank, two DIP switches tell the speaker which of the AES3 input signals to listen to (A, B, or a sum of both). If sum is selected, a 6dB attenuation is applied automatically to avoid any possible overload. Another pair of switches reduce the monitor output level by 30dB (in 10dB steps), enabling you to drive the monitor at its optimum input signal level (a ±6dB trim control for the analogue input helps with finer adjustment too). A further two switches disable the front‑panel indicator LED and activate or defeat the power‑saving Intelligent Signal Sensing System (ISS) function.

The monitor’s operational frequency response is set by the final switch in that bank, which selects between the frequency profile for standalone operation set by the second bank of DIP switches and the stored profile created using the DSP’s internal parametric filters under the control of the Genelec Loudspeaker Management (GLM) system.

I first came across Genelec’s GLM software in its v2 incarnation, during my reviews of Genelec’s 8320A and 8330A back in 2015. Version 4.0.2 (current at the time of this review) is a huge step forward, both graphically and operationally. 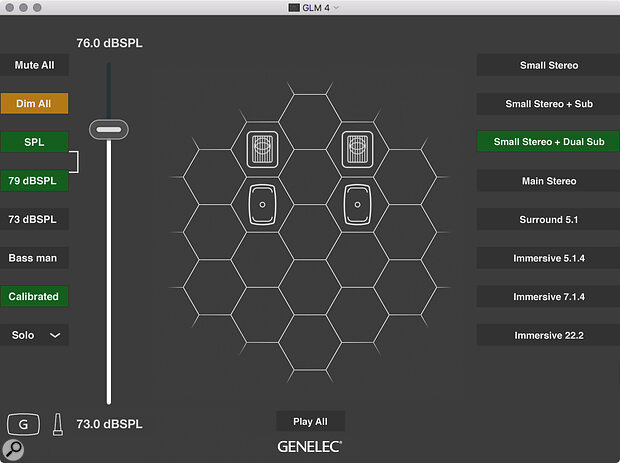 The GLM software’s capabilities have increased considerably over the years, to the point where using it to set up a pair of stereo monitors when it is capable of handling Genelec’s Immersive Room Solutions might well seem like taking a sledgehammer to crack a nut! But where a sledgehammer is needed, GLM is capable of working on systems that range from a ‘simple’ 5.1.4 setup in a small room or OB truck to a 31‑channel film‑mixing system comprising LCR mains, 16 surround speakers, 12 ceiling speakers and three subwoofers.

The 8361A is tri‑amplified by Genelec’s own Class‑D PWM amplifiers, with 700W for the bass and 150W each for the midrange and treble frequencies. Crossover frequencies are set at 320Hz and 2.8kHz. The 8361A’s maximum long‑term SPL is 109dB, and the monitor is capable of delivering a maximum short‑term SPL of 118dB and an instantaneous peak SPL of 124dB. Although the 8361A does loud very well, it also has a low self‑noise of ≤5dBA (at 1m). The frequency responses is specified as 36Hz‑20kHz within ±1.5dB, and 30Hz‑43kHz at the ‑6dB cutoff points.

Genelec conceived and designed The Ones as nearfield monitors in which the MDC coaxial mid/treble driver, the ACW and the DCW combine to not only place their acoustic axes precisely in the middle of the front baffle (enabling either portrait or landscape orientation), but also to deliver a level of driver integration that allows engineers to work very close to them, thereby reducing the effects of room coloration. Genelec say that you can work with any of the 83X1 series from distances as short as half a metre — although at that range, the 8361A would be capable of delivering a maximum long‑term SPL of 115dB, so I’d personally be sitting back a bit. A distance of about 1.5m (where the maximum long‑term SPL figure drops to 106dB), and monitoring at levels around the 85‑90 dB mark, felt very comfortable to me.

On first firing up the 8361A in standalone mode and with the response set completely flat, my initial impression was of a bass‑biased tonality, which rather surprised me. After a few days, however, that initial impression left me and I began to appreciate the power, control and extension in the 8361A’s bass, although its performance could still, at times, feel a bit overwhelming. Rolling off the 8361A’s bass using the rear‑panel DIP switches got me to a point where I was really happy — but when I brought the GLM system’s Automatic Calibration (AutoCal) algorithm to bear, the monitor’s performance really took off.

The whole process took only a couple of minutes, and the results were instantly impressive, with the soundfield produced by the 8361A snapping into focus as the level of detail across all frequencies seemed to suddenly increase.

The GLM 4.02 package consists of a computer interface, a measurement microphone, RJ45 cables to connect the GLM and SAM loudspeakers together, and a USB lead to connect the interface to your computer (the GLM software requires a Mac OS or Windows computer, which must be connected to the Internet). Once the AutoCal process has carried out a frequency sweep through the loudspeakers, the resulting room response data is sent to the Genelec cloud server, where the calibration data necessary to optimise the performance of the system overall and each individual loudspeaker within that room is calculated, and uploaded to each loudspeaker. The whole process took only a couple of minutes, and the results were instantly impressive, with the soundfield produced by the 8361A snapping into focus as the level of detail across all frequencies seemed to suddenly increase.

I summed up my 2015 review of the Genelec 8351A by describing its performance as outstanding. The 8361A, when calibrated to its environment by the GLM system, goes even further, adding an air of controlled power to proceedings that brings out even more detail from the source and moves the monitor’s performance up to another level. The authority and detailed clarity in the 8361A’s low‑frequency performance, and the precise delineation of midrange detail against that background, are perhaps the most impressive aspects of the monitor’s delivery. In conjunction with the increased power and the revised midrange and high‑frequency drivers, the overall performance renders the entire soundstage, and the sources within it, with stunning clarity.

If you have the need, the budget and the studio in which to exploit these superb Genelec monitors to the full, you really should audition them. They are expensive, however the value within their performance is, to me, worth far more than their price.

Although no other manufacturer’s monitor compares directly to the 8361A, at around the same price you’ll find other superb‑sounding three‑way monitors from the likes of ATC, Dynaudio, HEDD, PMC, PSI Audio, SP Acoustics and Unity Audio, among others.

An active monitor that delivers an absolutely stunning overall performance and which can be used at distances from under 1m and up to 5m without any compromises in sound quality.