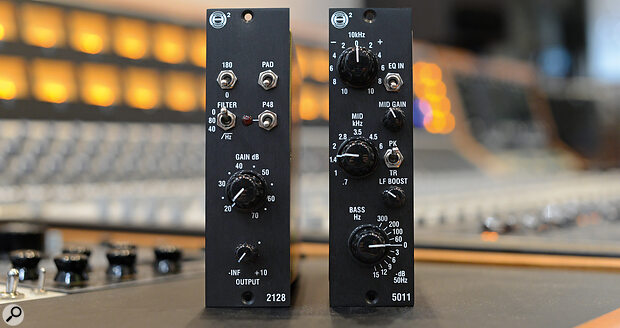 H2 aim to put the legendary sound of Olympic Studios in your 500‑series rack.

H2 Audio is a new collaboration between engineers Al Sutton of Acme Audio and Rustbelt Studio, Tim Mead of Q2 Audio, and entrepreneur, recording artist and engineer/producer Perry Tell. They all share an appreciation for the sonic qualities of the golden era of British Rock music, and have devoted much of their recent design effort into producing modern recreations of equipment from this time, particularly the designs of Dick Swettenham. After beginning his career as a maintenance engineer at Abbey Road in the early 1950s, Swettenham moved on to another legendary London studio, Olympic, where he began to introduce his own designs under the name Helios Electronics. The Helios consoles that were installed at Olympic and elsewhere were used to cut tracks by countless famous artists, including the Rolling Stones, Led Zeppelin and Black Sabbath.

After sourcing a number of original examples, more than a year of experimentation followed before H2 Audio released the 0011, which is a faithful reproduction of the preamp, filter and EQ stages of the recording channel found on the Helios Consoles at Olympic. From there, H2 decided to port the design to the popular 500‑series modular format, and decided early on that it wouldn’t be possible to squeeze everything into a single module while maintaining the integrity of the circuit and overall design. As with many other vintage designs that have been migrated to this format, their solution was to create two separate products: the 5011 EQ and the 2128, which is a preamp with the high‑pass filter section.

Both units sport the same, understated, black styling, which is in keeping with the look of the original Helios modules. The decision not to attempt squeezing everything into one module seems sensible to me, not least because it means you can have proper‑sized switches and dials, but it’s also a more versatile approach than creating a ‘doublewide’ module with everything on board.

Looking at the 2128 preamp first, everything you’d expect to find on a good mic preamp is here. There are input and output transformers, a 20dB pad, polarity inversion and switchable 48V phantom power, and it’s all laid out nicely. The filter section offers a switchable high‑pass filter, and the 40 and 80 Hz options are very usable options for tracking. As with many vintage preamps, the gain is stepped in 5dB increments, and here it allows for a total of 70dB gain. There’s also an output‑level control, which ranges from full attenuation to +10dB gain. This takes the maximum available gain up to 80dB, allows you to set the gain more finely between the 5dB steps, and means you can choose how hard you wish to drive the preamp circuit for colour, without overloading the next stage in your signal chain.

For anyone not already familiar with the classic Helios layout, the 5011 EQ module can take a few moments to get used to but the slightly limited options are part of this EQ’s charm. Starting at the bottom, the Bass control is a 10‑stage switch. In the five lowest positions, below 0, this engages a low shelving cut, with the depth of cut ranging from 3‑15 dB at 50Hz. Above zero, the four boost positions (60, 100, 200 or 300 Hz) switch in a bell filter with a separate LF Boost gain knob.

The mid band is a more conventional ±10dB bell, with the labels PK and TR next to a toggle that switches between ‘peak’ (boost) and ‘trough’ (cut) modes. There are eight selectable frequencies here: 700Hz and 1, 1.4, 2, 2.8, 3.5, 4.5 and 6 kHz. Again, this band features a separate gain control. Finally, the topmost control is for a ±10dB 10kHz shelving filter. The EQ has an electronically balanced input and a transformer‑balanced output stage — the same one as in their 0011 rackmount preamp and EQ, which was designed to overcome the difficulty the original Helios consoles had of driving 600Ω loads.

Given that both units have balanced I/O, you could quite happily use either of them on their own, or mixed and matched with a different preamp or EQ. But as I had both at hand, I took the opportunity to assess them working in tandem as a channel strip.

My first port of call was a vocal tracking session, in which I was using a U47‑style microphone on a baritone male singer. I’d typically use one of my Neve 1073LBs for vocals, and I was impressed with just how much more present the midrange seemed on the H2 preamp — there was plenty of presence without it ever feeling like too much. Knowing that this particular singer likes to do a number of takes to get warmed up, I took the opportunity that afforded me to play with some subtle EQ options, and I found that a little boost at 100Hz and a similar lift at 10kHz gave the vocal a more finished feel; I felt confident enough in the sound to leave this engaged for the majority of that session.

If you had a stack of these preamps available to track a band with, you’d be a very happy engineer!

We tackled some acoustic guitars next and I was again impressed with how quickly I was able to audition different tone‑shaping options, this time by playing with the midrange band. The 3.5kHz boost quickly became a favourite on both electric and acoustic guitars, and I was surprised by just how far I could push this before things started to sound bad. In fact, that’s an observation that became a common theme throughout the review period, and with the bass boost in particular I’ve found that it’s possible to make some dramatic changes to a kick drum or bass guitar without it sounding ‘unnatural’.

Later, I decided to do some dedicated A/B comparisons away from the pace and pressures of a real‑world recording session, to try and get a real sense of the character of these modules. Comparing the 2128 preamp with one of my Neve 73LBs, whose sound I know very well, I made test recordings of a kick drum close mic, snare close mic, DI bass guitar and an acoustic guitar. On the kick drum and bass DI, it was noticeable just how full the H2’s low end was; the 2128 revealed some subtle sub frequencies that just weren’t audible on the Neve. The snare drum benefited from a lovely, saturated, almost compressed sound, and although I preferred the character of the Neve on an acoustic guitar, the H2 preamp still sounded impressive.

You can find audio examples of these recordings on the SOS website, along with examples of the same sources with some EQ applied: https://sosm.ag/h2-audio-500-series Or download the ZIP file below.

Today, we’re spoilt for choice when it comes to mic preamps and EQs, and at this sort of price you can choose between most of the console‑inspired options that are available in the 500‑series format. But the Helios design is loved and admired for a good reason, and if you’re in the market for a high‑end boutique preamp then the 2128 should definitely be on your shortlist. It offers a pleasing dose of character while still managing to sound focused, and offers a very full‑range bottom end. If you had a stack of these preamps available to track a band with, you’d be a very happy engineer!

The 5011 EQ is similarly impressive, and a superb example of a vintage‑style EQ: the limited options and tonal character are so well judged that it allows you to make dramatic changes to the character of a source very quickly and easily — it’s everything a good console EQ should be. Of course, they also combine to form a superb recording channel.

A great‑sounding pair of vintage‑inspired 500‑series modules. Used together, the 2128 preamp and 5011 EQ make a superb‑sounding channel strip but can be equally impressive when used individually.