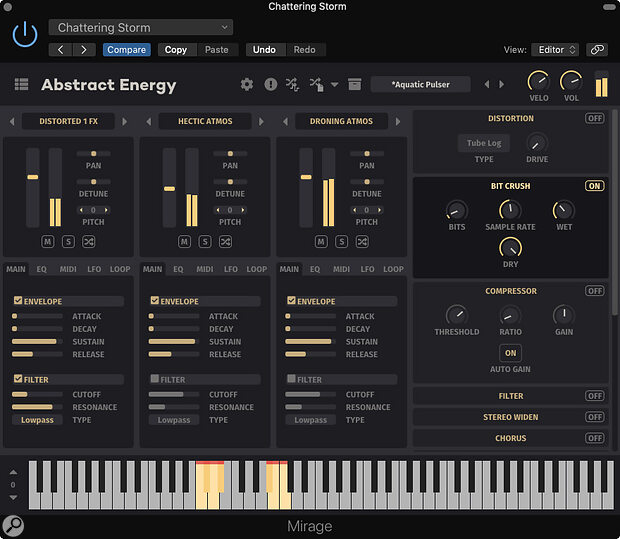 As its name suggests, the Cinematic Atmosphere Toolkit from Frozen Plain is designed to provide sounds that fit in with cinematic soundtrack compositions, though there are applications in other musical genres such as chill, EDM and ambient. What you get is a suite of six smaller separate libraries, all of which run on the included Mirage player under VST or AU hosts. The six sample libraries comprise a total of 788 samples, each one usable as one of three possible layers inside Mirage. There are 300 categorised presets and though editing is easy, Mirage’s randomisation features often come up with something usable. Many of the sounds are pitched but the atmosphere pads often work best played monophonically to prevent things getting too busy. There are also some one‑shot, short effects throughout the libraries.

Abstract Energy (shown above) embraces chaotic digital sounds and atonal structures that can be further shaped using the Mirage engine’s envelope, looping and filter functions as well as its effects rack and convolution section. This latter includes 16 IRs ranging from creaking doors to wind that have a radical effect on the sound. The overall feel is industrial, sometimes disturbing and occasionally edgy. Paranormal leans in the direction of horror or the supernatural, again with disturbing harmonic structures, weird vocals and other textural delights. The somewhat unsettling Scare Tactics further builds up the sense of menace before we reach Dreamstates, which offers accompaniments to both calm and disturbed sleep. Some of the sounds are of a single pitch, some dissonant and others based on evolving chordal textures.

Signal Interference takes a slightly more sci‑fi approach using processed noises of various kinds to create a future‑industrial/rusting spaceship vibe, again with some atonal beds and some playable patches, while Feedback Loops takes us in to more strident realms of noise and texture where distortion often plays a significant role.

Libraries are added using the library browser pane, though you can’t layer sounds from different libraries.

The sounds on offer include some patches that you might feel disposed to play a tune on but the majority work best as beds or transitions where you want to evoke a specific type of atmosphere. Patches load almost instantly, which is good news when you are browsing for inspiration, and the Mirage Engine makes it easy to adjust sounds using intuitive controls. If you don’t need all the libraries they are available separately but at under $100 for the lot, there’s plenty of scope for very little outlay.