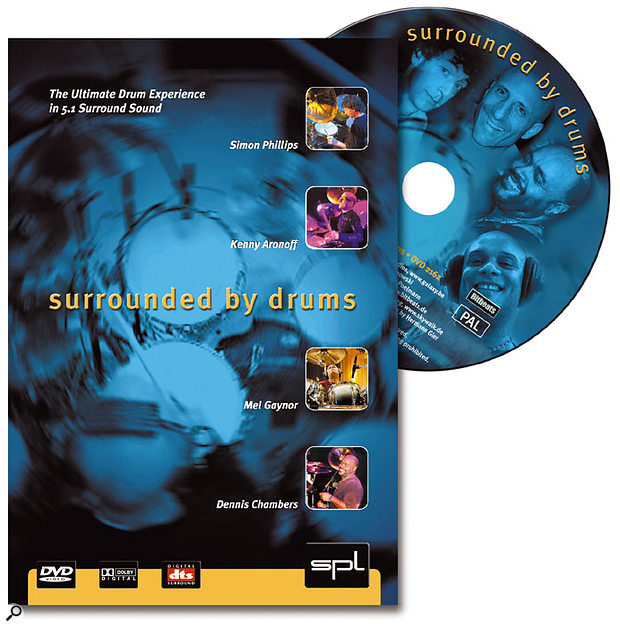 Recording drum kits is always something of a challenge, and although no two engineers will ever approach the task in quite the same way, there is plenty to be learned from examining the techniques used and applying them to your own situations. That's why this DVD, produced by SPL, is so interesting.

The disc is intended to demonstrate 5.1 surround-sound techniques, with four world-class drummers providing the source material. The original impetus for the project was to record the first 5.1 drum sample library, with Chris Pfannschmidt of the Real Mega Drums and Real Mega Rhythm CD-ROM collections in the producer's chair. The four drummers involved were Simon Phillips, Kenny Aronoff, Dennis Chambers, and Mel Gaynor, and the recordings were made at Galaxy Studios in Belgium using an AMS Neve Capricorn digital console, Digidesign Pro Tools 24 hard disk recorder, and Genelec 1035B and 1038A monitors. Each performance was recorded using SPL's Atmos 5.1 surround recording system, which provided the overall surround image and room sound, as well as with a multitude of close mics festooned all over each kit — the usual array of Shure, Neumann, and AKG models.

The 5.1 surround sound is presented from the drummer's own all-enveloping perspective, the justification being that, while it is straightforward to derive the traditional 'in front of the kit' perspective from an overhead surround recording (simply by panning the rear speakers to the front and swapping the left and right channels), it is impossible to create an enveloping sound stage from a traditional frontal recording. A second argument is that recording the kit the way the drummers actually hear it themselves allowed them to say whether the recordings were really capturing the sound properly or not — which was the goal, after all.

However, there is a teensy-weensy fly in the ointment. The video is shot from a fixed position in front of and above the drummer — an audience viewpoint if you will — resulting in a stark contradiction between the sound and picture perspectives. Seeing the drummer reach out to a crash cymbal on the right, but hearing it from the left is initially confusing and ultimately frustrating. The problem can be easily resolved by reorganising the audio outputs from your DVD player or your speaker cables, but I can't help feeling this really should have been addressed at the mastering stage!

In addition to the surround mixes (presented in both Dolby Digital and DTS formats), there are also stereo downmixes, but these, rather perversely, are in the traditional frontal perspective and match the left-right orientation of the camera position!

As well as a pair of very impressive solos given by each of the four drummers, the disc also contains interviews with them talking about their expectations and experiences of surround sound. There is additionally a Making Of... video which lasts 15 minutes and shows the studio and control-room setups, as well as the team working on the project. One of the most informative sections lists the components of each drum kit, along with which mics were used on which elements.

It's important to restate that this DVD doesn't contain drum workshops or clinics, or any explicit advice about drum miking techniques. However, it does provide some superb-sounding examples of 'state of the art' drum-miking techniques, and the pictures are sufficiently detailed to see what is being used and where the mics are placed. Apart from the small issue of contradictory sound and vision perspectives, the disc is excellent — entertainingly impressive, and educationally informative in equal parts.