An Introductory Guide By Hugh Robjohns 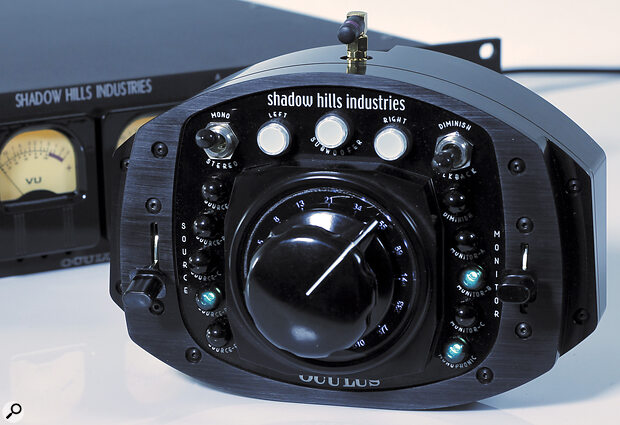 Why might you need a dedicated monitor controller — and what separates the good models from the bad?

In days gone by, analogue consoles included a monitor section that, at the very least, provided a volume control (usually the largest knob on the desk) and a source selector, typically to switch between monitoring the mix output and one or two external two‑track recorder playbacks. Today, most of the studio action centres around a computer, DAW software and an audio interface. Without a console, you’ll either need your DAW and audio interface to perform those duties — or a monitor controller.

Can I Just Use My Interface?

In its most basic form, a monitor controller controls the listening volume of a single set of speakers. Most also include some means of switching between a few sources, and of sending the selected source to different loudspeaker and headphone systems. More elaborate units enable you to check various aspects of the monitored signal and possibly control artists’ cue headphones.

The combination of DAW and audio interface is capable of performing the same tasks, and can be a very cost‑effective solution: the signal path from interface to speakers is direct and simple, with nothing in between to degrade the signal; a multi‑channel interface can cater for multiple sources and destinations; and your DAW can be used for various signal checks.

The fact that most interfaces adjust the monitoring volume digitally seems to concern some people: for each 6dB of digital attenuation you use one less bit of the source’s word length through the D‑A converter, so that must mean less ‘resolution’, right? No! The signal‑to‑noise ratio does decrease as the signal is attenuated, but the quietest elements disappear gracefully into the (dithered) noise floor, just as in the analogue world: there’s absolutely no ‘loss of resolution’ relative to an analogue volume control.

What is important, though, is to work with a properly optimised gain structure throughout the monitoring signal path. This ensures that the interface’s noise floor is kept as low as possible. Most budget interfaces’ D‑A converters are capable of 115dB or more dynamic range, and most nearfield monitors can produce peaks at 1m of around 112dB SPL or more. So, if the peak digital output level is aligned to match the peak SPL capability of the speakers, the interface’s noise floor will lie comfortably below the threshold of hearing: ‑3dB SPL, with the above figures. I covered the optimisation of the monitoring path gain structure in detail in a 2014 article, which you’ll find on the SOS website: https://sosm.ag/reference-monitoring

What most interfaces don’t offer is any signal‑conditioning functions so, in such a setup, these must typically be performed in the DAW software, and some DAWs make that easier than others. For example, Cubase Pro and Nuendo include a Control Room facility for switching between different speaker and headphone sets, setting and recalling reference levels and hosting plug‑ins in the monitoring path.

That all sounds very promising, doesn’t it? So why bother with a dedicated monitor controller? Actually, there are various reasons. First, although computer crashes are rarer today than in the early days of DAWs they still happen, and when they do there’s a chance that the audio interface crashes too, generating full‑level noises that aren’t good for speakers or the listener’s ears. Having a reliable volume knob or mute switch a hand‑stretch away can be an ‘ear‑saver’.

...a standalone controller makes it possible to select and audition external sources when the computer is powered down.

Another consideration is that a standalone controller makes it possible to select and audition external sources when the computer is powered down. For example, you can connect a CD player, or take a minijack feed from a phone. Or perhaps you want to play a synth or through a hardware amp modeller without booting up your PC.

Furthermore, as a hardware controller is a self‑contained entity, there’s no need to dedicate space on your screen for monitoring functions, or to switch screen views to get at them — something which I find can become particularly tiresome if working on a laptop.

Finally, using a monitor controller means that you can employ multiple speaker sets without using up dedicated audio interface I/O, and that can mean that you have a wider range of audio interface options within your budget.

The simplest monitor controllers are passive volume controls comprising a potentiometer or adjustable attenuator in a desktop box. However, passive controllers are not always cheap and basic. Many include alternative input selection and multiple loudspeaker output routing, and some very expensive passive designs employ elaborate switched attenuators as precision volume controls. Some even use bespoke multi‑tap transformers. However, it’s difficult to include complex signal‑conditioning options in a passive controller. 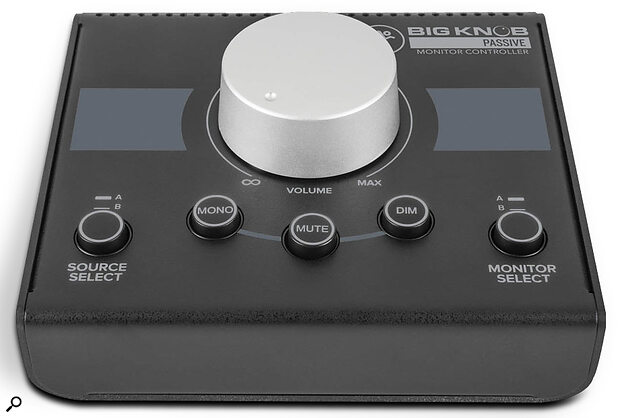 A simple passive monitor controller can work well, but can be compromised if using long cables. Some models, like this Mackie Big Knob Passive, feature a Dim control, that allows you to monitor temporarily at lower levels without disturbing the volume control.

Many people believe that passive controllers are inherently better than active ones simply because there are no electronics in the signal path to add noise or distortion, but the reality is more nuanced. Provided the connecting cables are kept reasonably short (a couple of metres or less), they usually work perfectly well, so at the budget end of the market, they can offer good value. A potential downside, though, is that as the volume control is adjusted the source device ‘sees’ a varying input impedance, while the loudspeakers receive a signal from a varying source impedance. With good design and short cables these variations aren’t usually problematic, but if working with vintage impedance‑matched equipment or long cables, they can cause a loss of high frequencies and introduce distortion. Radio‑frequency interference (RFI) is often a concern too, particularly with budget passive controllers, because many don’t maintain an accurate impedance balance between the hot and cold sides of the balanced signal paths, which substantially degrades the common‑mode rejection ratio (CMRR).

Active designs employ electronics to buffer the inputs and outputs, to ensure stable and properly optimised input and output impedances and good CMRRs, so long cables or unusual source and destination impedances can be accommodated. With good design, the noise and distortion introduced by the active circuitry is far below audibility, often bordering on being unmeasurable. Active designs also make it easier to incorporate additional functionality like headphone amps, talkback and metering, as well as making it easier to implement signal‑check facilities. Low‑level, unbalanced consumer signal sources can also be accommodated because the necessary gain is easy to provide.

Naturally, active monitor controllers cost more to make than simple passive types, and most upmarket monitor controllers are active. But not all good ones are expensive: the ‘sweet spot’ for home studios is probably in the £200‑500 $300‑600 range, where you’ll find technically well‑specified and well‑equipped products from the likes of Drawmer, Audient and SPL. The bottom line, whether a model is active or passive, is that if the volume is set to unity and you can hear a quality difference when the monitor controller is plugged in or bypassed, it’s not good enough: a monitor controller’s role is to allow you to hear only what is presented by the source signal, so it is essential that it adds nothing and takes nothing away. 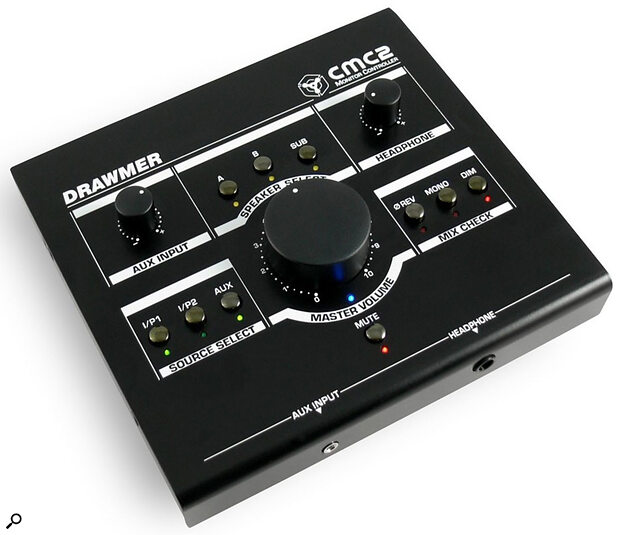 Drawmer are one of a handful of companies offering very capable active monitor controllers at an accessible price for the average home and project studio.