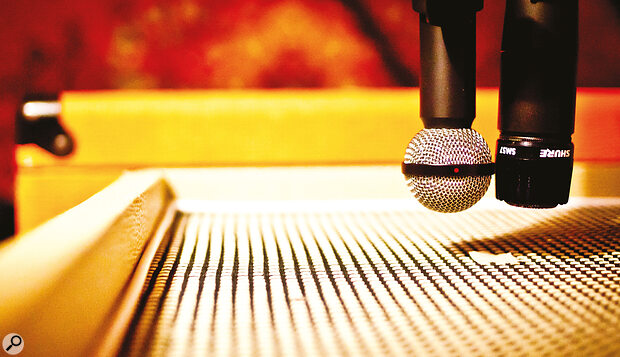 If you keep both mics equidistant from the speaker cone, phase cancellation is unlikely to be problematic.

Many classic electric guitar sounds have been captured using just one microphone. So when and why might you use more?

My article in SOS July 2021 (www.soundonsound.com/techniques/how-record-guitar-cabs-one-mic) focused on the basics of recording electric guitars using a single mic. In many cases that can deliver perfectly decent results, and I’d always recommend that inexperienced recordists start there. But it’s long been common in professional circles to blend more than one signal when tracking electric guitar. There are various established multi‑mic techniques to try yourself and probably plenty more awaiting discovery, so in this article, I’ll explain when and why two mics might be better than one.

The most obvious reason to use two microphones is when, despite having tried all the mics at your disposal, you can’t quite get the sound you want using only one. Perhaps the best mic choice and position deliver the tonal ‘bite’ you’re looking for, but lack a little punch in the low end. When you add a second mic, the relative position of the two mics can make a big difference to the sound, but it’s best to start by choosing mics for their tonal characteristics and placing them right next to each other. That said, if you have the time to experiment, it’s worth trying all of your mics in different pairings, as it’s not always immediately obvious why two mics happen to work well when combined.

A popular, well‑established tactic is to pair a moving‑coil dynamic mic, such as the ubiquitous Shure SM57, with a ribbon mic. The Royer R121 is a popular choice in the latter role but they all have broadly the right characteristics: typically, the full bottom end and smooth, rolled‑off high frequencies of a ribbon mic combine very well with the more mid‑ and presence‑focused SM57, without either needing much EQ. You can balance the two to taste and either record that blend to a single track, or capture them separately on two tracks. The latter approach can leave you with greater tonal control when mixing, without needing EQ — though I’m of the opinion that having lots of options when mixing isn’t always a good thing! 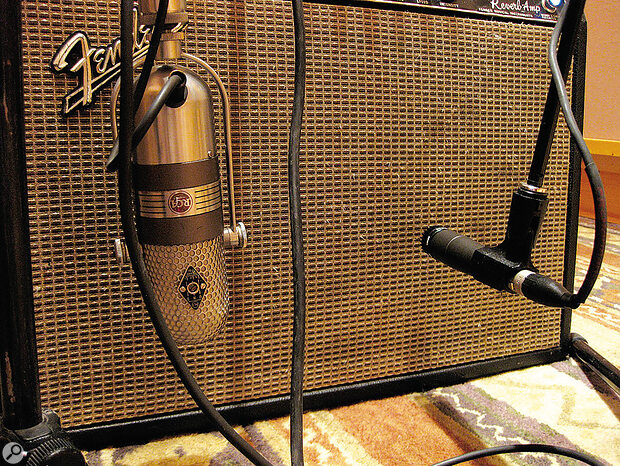 A classic combination is to pair a ribbon mic with an SM57: the frequency responses of the two seem to combine particularly well.

Combining a dynamic mic with a capacitor model is also common practice. The Neumann U87 and various AKG C414s, usually in cardioid mode, seem particularly popular but, while the results seem to vary more from one capacitor mic to another than with ribbons, you can try any of them — that’s how I came to know that one of my personal favourites in this role is the Audio‑Technica AT4050. Don’t worry too much about whether the moving‑coil or capacitor mics you try have a cardioid or hypercardioid polar pattern, as it’s the subjective end result that counts. But you should be aware, when it comes to spill from unwanted sources, that hypercardioid mics are more sensitive at the rear than cardioids. 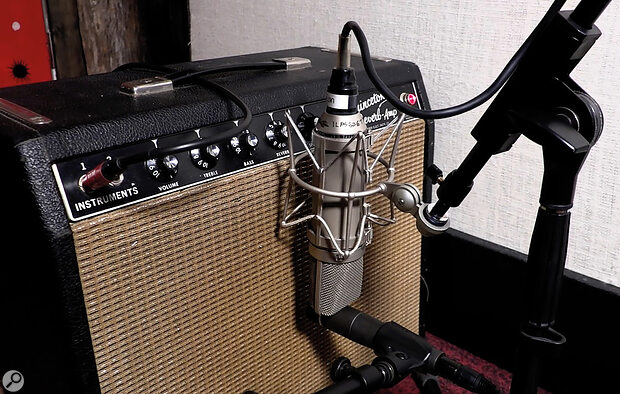 Pairing a capacitor mic with a moving‑coil dynamic is also common. Here, you can see a Neumann U67 and SM57 combined by engineer Vance Powell on a Fender Princeton amp.

When two close mics are placed on the same source, their phase relationship is naturally a consideration. However, because the electric guitar is inherently an ‘unnatural’ sound, the comb‑filtering effect you hear when moving one mic a little further from the speaker isn’t necessarily problematic. In fact, it can be a useful means of fine‑tuning the overall tonality without resorting to EQ.

If you treat the two‑mic blend as a single signal (ie. pan the two mics identically, maintain the same blend of their signals throughout the song, and apply any processing on a group bus) then phase cancellation needn’t really be a concern. But if the mics aren’t in phase and you choose to pan them to create a sense of width, the tonality will sound different for mono playback than for stereo — it might or might not be a problem, but you should definitely consider the impact on the mix balance. Also, if you change the balance between the two mics during a song, the nature of that tonal change can be less predictable if the two aren’t broadly in phase.

A coincident array, which places the two mic capsules as close as possible, ensures that you avoid phase problems, but a simple rule of thumb is that if you make sure that both mics are the same distance from the speaker cone, phase cancellation is unlikely to be a significant problem. For more precise alignment, you can position one mic, then flip the polarity of the other and move it around while feeding a noise source through the amp. Cancellation between the two mic signals will be greatest in the most phase‑coherent positions, and once you’ve found one, filpping the polarity back to its original setting...