The Tempo Track allows you to change the tempo of your song, either abruptly, in a straight ramp, or as a smooth curve.

Manipulate the timing of MIDI and audio with Studio One’s Tempo Track.

Trying to keep everything together is a bit of a lifelong mantra for musicians. Whether you prefer to languish in free‑form movements or keep things as tight as an atomic clock, you inevitably need to pull disparate parts from disperate tracks towards some kind of common sense of rhythm. Let’s take a look at the Tempo Track in Studio One and see if it can help us hit that downbeat with everything all at once.

The Tempo Track resides at the top of the tracks, in the same place you’d find the Chord Track, Marker Track, Arranger Track and so on. It’s shown with a clock icon, but if you can’t see that you’ll find it under the ‘Global Track Visibility’ icon which looks like a hamburger with a single beady eye staring at you from the meat layer.

Stuck In The MIDI

If your song is made up of MIDI tracks then the Tempo Track can be a useful place for messing about with the timing of your song. When you open it, you’ll find it’s there as a single line set at the song’s tempo, as defined in the transport bar. In the header for the Tempo Track you can enter a tempo and the line will change to reflect that. You can also change the minimum and maximum tempo range to keep your focus where you need it and give a better resolution.

Your mouse pointer has two functions within the Tempo Track. Firstly, in the lower section of the track it becomes a pointy finger, which lets you add a tempo change at that point on the line. Secondly, if you hover towards the top of the track the cursor becomes a trim tool, shown by a short horizontal line with a vertical line on either end. If you click and drag up or down you’ll move the entire tempo or selection up and down.

Inserting a new tempo change gives you a node that you can move about and place along the timeline, drawing a straight line from the original tempo point. A central node between the two lets you pull in a curve if you want a less linear movement from one tempo to another. To jump tempos rather than transition, it’s easier to enter the tempo value into the box on the track header and hit the ‘+’ to enter the change at the position of the song pointer.

You can create quite complex lines of timing change, and there are a couple of ways of viewing them in the timeline. In the top toolbar under Timebase you have two options: Time‑linear and Beat‑Linear. With Time‑Linear the song pointer is always moving at a constant speed, so when you change the tempo the bar lines on the timeline expand and contract to compensate for the changes. If you select Beat‑Linear then the bar lines remain a constant width while the song pointer speeds up or slows down depending on the tempo.

Once you introduce audio files to a tempo environment things can get out of hand. Studio One has lots of automated processes that try to make conforming the tempo of audio as painless as possible. If an audio file has tempo information built into it then it will automatically adapt that to the song tempo using time‑stretching. If an audio file doesn’t have an associated tempo, then Studio One can attempt to detect it and then do the time‑stretching after that. This is particularly effective with loops and other tempo‑based audio files, but if you are pulling in a recording of a guitar, drums or other instrument then the tempo might be a bit more up for discussion. 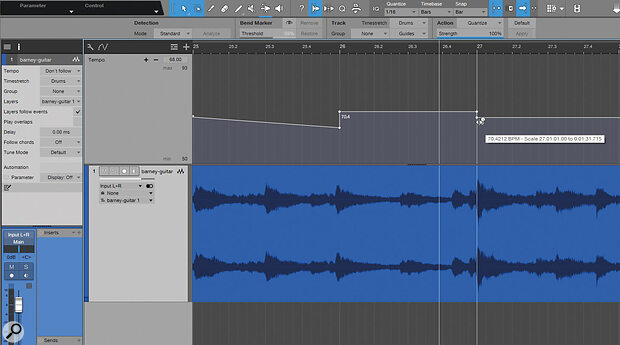 Conforming a project’s tempo to an existing audio recording.

Here’s one tip on doing some manual time stretching if you do have a piece of audio with a constant tempo but which Studio One doesn’t quite nail automatically. Open the Inspector and make sure Tempo is set to Timestretch. Then put your cursor at the end of the clip and hold Alt+Ctrl (Windows) or Opt+Cmd (Mac), then click and drag the end of the clip and it will time‑stretch or time‑compress the file. Then all you do is move it until the obvious start of a bar visually lines up with the bar lines.

If you like the groove of an audio recording, then you can create a tempo map that will follow the variations in tempo, which you can then apply to all your MIDI tracks to pull them in time. This is perfect for trying to build a song around an acoustic guitar track, or if you are wanting to develop some MIDI instruments around a multitrack recording of a band. Choose a track that has a lot of obvious rhythm; drums are perfect but that acoustic guitar track will work too.

For this we don’t want Studio One to do any automatic time‑stretching, so open the Inspector on the audio track and set the Tempo option to ‘Don’t Follow’. You’ll want to start with a rough tempo for the audio track, which you can do by playing the track and then use the Tap‑Tempo feature to give you a bpm. Click your mouse a few times on the word ‘Tempo’ on the transport bar in time to the track, and you will have tapped the tempo into the transport bar — it’s quite a brilliant little feature. Next, visually line up the start of your audio track with the start of a bar. If you turn on the metronome you should be able to hear where it goes in and out of time, and this is where the Tempo Track comes in.

It’s all done visually because you can see the rhythmic material in the audio track, and we want that to line up with the bar lines in Studio One. So, on the next bar hold Ctrl (Windows) or Cmd (Mac) and your cursor in the Tempo Track will turn into a Range tool. With Snap enabled the tool will snap to the bar line, and you can click and drag it until the line matches up with the appropriate transient on the audio track. On either side of the tool the tempo will increase or decrease reflecting the change. If the Timebase is set to Time‑Linear mode then the bars will expand and contract with the change; if you’re in Beat‑Linear mode then the audio file will expand and contract instead. I find I prefer Time‑Linear so I can see the bars change as I edit the tempo.

Once you’ve gone along adjusting the tempo for every bar where it’s necessary, listen to it again with the metronome and you should find that it’s all in time. Now your MIDI tracks will follow along as if it’s the most natural thing in the world.

You can make this a little bit easier by detecting the transients on the audio file first. This will give you accurate lines on the key segments in the audio file with which to line up the bar lines. To do this, select Audio Bend from the Toolbar and the tools panel will appear. Under Detection hit Analyze and Studio One will work out all the transients in the audio file. It will probably find far too many when really all you need is the start of each bar, so use the Threshold slider to dial things down a bit. Then you can make the manual tempo changes just like before but with a better visual guide. Once you’ve finished you can remove the transient lines (they can get quite distracting) by right‑clicking the audio file and unticking the Bend Marker box. 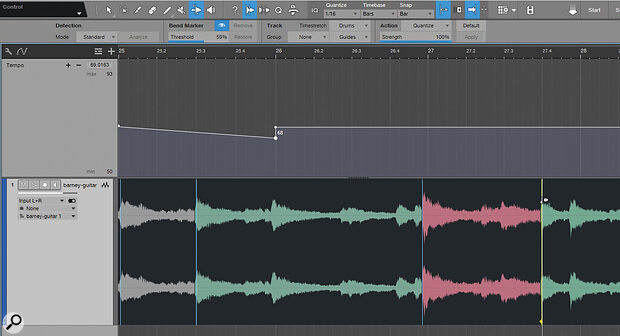 It’s also possible to warp audio so that it plays in time with the rest of your project.

The other scenario is that you want to break the groove of an audio recording and bend it to the will of the existing tempo. For this you need to use Audio Bend to Analyze the audio track so we can see the transients. Rather than adjusting the tempo to fit the audio, we’re now going to move the transients to fit the existing bar lines. Select the Bend tool and you’ll be able to move the transient Bend Markers, which time‑stretches and compresses the audio file either side to bring them in line.

Melodyne Essential, which is built into Studio One, also has some powerful tempo‑related functions that are definitely worth exploring. However, most of the documentation and online tutorials refer to the Studio version of Melodyne, and many of the tools and functions mentioned are not available in Melodyne Essential. I think a workshop on exactly what the Essential version can do in Studio One would make for a useful workshop though, so I’ll be covering that in a future article.