Q. Are passive mics less noisy than active ones? 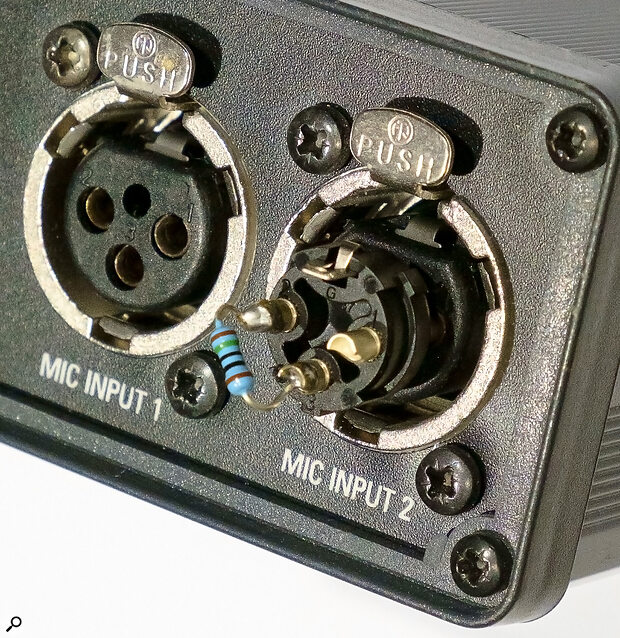 A 150Ω termination across a mic preamp’s input, as used when measuring a preamp’s Equivalent Input Noise.

I record spoken‑word narration, close‑miked in a small room, with basic room treatment. While I have no noise‑floor problems, I’ve noticed that some of my mics have a lot less noise than others. I’ve made several recordings of room sound at a quiet time of day, with the gain on each mic set to give the same voice output level from each on the meters of my recorder. It appears that my Beyerdynamic M201 and Royer R101 ribbon mics, which are both passive, are the quietest, giving an ambient noise floor of around ‑65dBFS, while my AKG C414 XLS capacitor mic set to cardioid is ‑52dBFS, a difference of 13dB. Am I correct in saying that passive mics are noticeably quieter than active mics?

SOS Technical Editor Hugh Robjohns replies: It depends! Every mic picks up the local ambient acoustic room sound — air molecules in a warm room constantly bang into each other and into the mic’s diaphragm, generating noise voltage at the mic’s output. This captured ambient noise level depends on factors such as the mic’s polar pattern and the size of its diaphragm, but the mic’s frequency response also plays an important role; dynamic mics may be perceived to be less noisy than capacitor types simply because of their relatively curtailed HF response, for example.

The source of electronic noise in a passive mic is related to the electrical resistance of the ribbon or moving coil and/or the output transformer, if present. If we assume the total electrical resistance of the generator is 150Ω, the noise voltage due to electrons bumping into each other inside the circuitry (Johnson noise) is theoretically ‑130.9dBu. Let’s round that to ‑131dBu. (This assumes an ambient temperature of 20C and a measuring bandwidth of 20Hz to 20kHz; change either and the numbers get skewed). Interestingly, if the mic’s impedance is closer to 30Ω, as with some vintage ribbons, the theoretical Johnson noise voltage drops to ‑138dBu but in practice it typically means less sensitivity and thus more preamp gain to achieve the same signal level — which, of course, raises the noise level again!

A DC‑biased capacitor or electret mic requires an impedance conversion circuit and the active electronics involved inherently introduces some noise. FETs usually generate less noise than valves, and this electronic noise is usually specified as ‘self‑noise’. It is typically quantified by replacing the mic’s capsule with an equivalent value of capacitor (thus removing any acoustic noise from the equation), measuring the output voltage (which is now only electronic noise), and relating that back to the equivalent level of acoustic noise needed at the mic’s capsule to generate the same output noise level. Impedance converters don’t usually provide significant gain, so only introduce a few decibels of noise. The most significant source of noise from the microphone is usually acoustic rather than electronic!

In this context it is worth noting that small‑diaphragm capacitor mics are inherently noisier than large diaphragm ones; the difference is typically 12‑20 dB. There’s a variety of reasons for this, such as the diaphragm tension (affected by the polar pattern), and the diaphragm surface area sampling sound waves. A good large‑diaphragm mic might have a self‑noise figure of 6dB SPL, whereas a very good small‑diaphragm mic is more likely to be 18dB SPL or higher.

Many manufacturers only measure the impedance converter’s electronic noise because it’s much easier to do and gives a better figure than including the acoustic noise contribution too. However, companies like DPA and Neumann usually measure the actual acoustic and electronic noise together by placing the mic in an anechoic chamber: this relates to real life more accurately.

Another factor that affects the perceived noise is the mic’s sensitivity. In general, passive mics have a much lower sensitivity than capacitor mics, so output a smaller electrical signal for a given acoustic SPL. That means more gain is required to raise the signal to a usable level, and the most significant factor in perceived microphone noise is usually the mic preamp. Preamp noise is broadly proportional to the amount of gain being applied, but it’s not always a linear relationship and many preamps are effectively quieter at higher gains than at lower or middle settings.

Mic preamp noise is specified as an EIN (Equivalent Input Noise) figure, and typically measured by connecting a 150Ω resistor across the inputs, applying a known amount of gain (usually 60dB), and measuring the output noise level. Whatever that level is (say ‑67dBu), we then subtract the gain being applied (the 60dB given above) to give the EIN figure: ‑127dBu. As mentioned above, a perfect 150Ω resistor generates ‑131dBu (at 20C, between 20Hz and 20kHz) but a preamp contains lots of electronics and even the best will add 3 or 4 dB of self‑noise. So a good real‑world EIN is around ‑127dBu. The best designs will do slightly better but only by 1‑2 dB and the worst will be many decibels higher.

It’s possible to make the EIN number appear better than it really is, by reducing the source resistance applied to the preamp’s input. Some manufacturers employ 50Ω or even a short circuit (0Ω), giving a much more attractive figure! If the source resistance (and ideally the temperature and bandwidth) isn’t specified, don’t trust the number!

So, assessing microphone noise is complicated because there are lots of interacting factors. Thankfully, in all but the very quietest rooms, and assuming the equipment is decent, ambient acoustic noise usually far outweighs the electronic noise, so we can choose mics for their other important characteristics.