When we think of musical genius, we tend to call to mind people with exceptional powers of planning and control. Whether it’s Bach composing fugues, James Brown drilling his band to obsessive levels of perfection or Brian Wilson crafting Pet Sounds over long months in the studio, genius is the person with a special type of command over music and the means of making it.

Where most of us would think ‘Oh, that doesn’t work’, the great sample‑based producers hear the key to a new sound world. 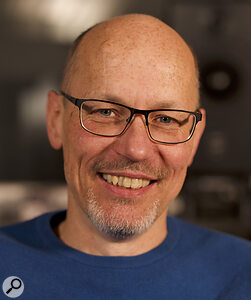 Editor In Chief Sam InglisBut there’s another type of genius. Exemplified by the likes of Brian Eno, John Cage, Daphne Oram or Miles Davis, this form of genius is all about giving up control. It’s about creating conditions where chance can flourish. It’s about inviting accident and happenstance into the room, and trusting yourself to recognise magic when it occurs.

When you’re working with samples, it’s this second form of genius that often comes into its own. The great samplists are those who have been utterly fearless in collecting, juxtaposing and treating samples, and far‑sighted enough to identify the seeds of greatness in those experiments. Where most of us would think ‘Oh, that doesn’t work’, the great sample‑based producers hear the key to a new sound world.

Genius, by its nature, is given only to a few. In this day and age, though, the tools that genius requires are available to everyone. And when it comes to the creative manipulation of sound, sample slicing is one of the most powerful tools we have. When we load up a loop and assign its individual hits to trigger pads, we usually don’t know exactly what we want to do with those sounds. We’re not executing a preconceived plan. We’re opening the door to chance.

When it comes to the creative manipulation of sound, sample slicing is one of the most powerful tools we have.

But if chance is to generate magic, we need to give it the opportunity. Genius can issue from experimental, risk‑taking boldness only if that boldness is harnessed to technique. Before you can experiment with sample slicing, in other words, you need to know how to do it. You have to become fluent with the process before you can reap the rewards.

When it comes to sample slicing, each platform has its own well‑established approach. Hardware options include Akai’s historic MPC range, NI’s powerhouse Maschine or Elektron’s elegant Octatrack; or you could pair a grid‑based controller with software such as Ableton Live, Bitwig Studio or Reason. From the perspective of a newcomer, it can seem a daunting choice — which is why we persuaded Simon Sherbourne to write this month’s cover feature. Simon has dissected more loops on all of these platforms than I’ve had hot dinners, and he’s the perfect guide for anyone taking their first steps in sample slicing. It’s a journey that could lead you absolutely anywhere — and that’s the beauty of it!