Looking for a mic that stands out visually, but offers good technical performance and a classy sound? This hand-made design could well be it... 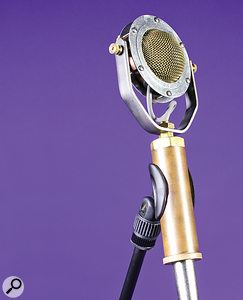 Ear Trumpet Labs are boutique American mic manufacturers whose unique selling point is a slightly bizarre desire to construct microphones using junk metal — for want of a better description! Philip Graham, the company's proprietor, describes himself as a 'bricoleur' — bricolage meaning the 'art of assemblage', or making artwork from found or re-purposed objects and materials. Apparently the French root of the word means to fiddle or tinker, which seems quite appropriate!

ETL mics look like they've been knocked together from the debris shaken out of a a plumber's toolbox or found on a bicycle-repair shop floor, but don't be fooled: despite some design hints at early broadcast mics, the Ear Trumpet Labs range isn't about old reproductions of anything specific — these are all original 'assemblages', although the preamp circuitry is derived from a classic transformerless Schoeps design.

There are currently five mics in the ETL range: the Edna, Josephine, Louise, Chantelle and, the subject of this review, the Edwina. They all cost roughly the same (under $£500), and all share similar plumbing off-cut aeshetics. The Edna looks a bit like an old Neumann Bottle mic (a capsule on a stick extending from a fatter electronics tube), the Josephine and Louise have vintage broadcast styling, with their capsules suspended in a metal hoop, and the Chantelle capsule is mounted on a short pivot arm extending from the top of the electronics tube.

Unfortunately, mere mention of this mic's name produces an involuntary shudder of my shoulders — 1980s UK politics has a lot to answer for! The Edwina's capsule is sandwiched between two steel flange-plates held together with stainless-steel bolts and brass cap-nuts, with the whole assembly supported from a metal yoke bolted to the top of the electronics tube. The 26mm, large-diaphragm, cardioid capacitor capsule can be rotated within the yoke arms, which means that the mic can be rigged as a conventional side-address mic, or as an end-fire mic, according to the application. A looped 80mm length of stiff cable couples the capsule to the electronics.

Most yoke-mounted mics support the mic body in the yoke, with a short, static connection between the mic and impedance-conversion electronics. The Edwina, on the other hand, has its very high-impedance capsule on the end of a couple of inches of wire, which is a fairly brave design decision — you'll want to keep mobile phones well away from this mic!

The body tube diameter is about 26mm, so the mic fits into common pencil-mic clips; the review model came with an unbranded generic clip that had a 5/8-inch mounting thread (but no 3/8-inch adaptor). The capsule head measures about 100mm in width, and the overall length of the mic is about 215mm. Unusually, the mic ships in a bright-red metal tool case, lined with high-density foam padding.

'ETL 108' (the make and model number) is stamped into the flange at the bottom of the copper electronics tube, the latter accommodating the output XLR, but I could find no individual serial number. There is also no obvious marking for the front of the capsule, both sides having an identical semi-spherical brass mesh. On the review model, the front turned out to be the side with the stainless steel screw-heads showing on the flanges, as opposed to the side with the brass cap-nuts.

There's no denying that the whole thing has a very individual and distinctive look, which is guaranteed to attract interest, and which will develop an individual discoloration with age and handling. Alternatively, you could while away the long, dark winter nights by polishing it to a high sheen fit for an Admiral's inspection — which would be very appropriate, given that the company describe the Edwina as having "the look of Captain Nemo's control room”!

The review model came without a manual of any kind, and there is very little technical information about the mic on the company web site. However, the latter does tell us that the electronics are 'very quiet and clean'. These use an FET front end and a fully balanced active output stage of discrete and precision-matched transistors. Standard 48V phantom power is required, but there is no information regarding current draw, microphone self-noise, maximum SPL or the other technical parameters normally specified by mainstream mic manufacturers.

The Edwina is intended for stage or studio; vocals, drum overheads, acoustic instruments or electric guitar cabinets, or even as a room mic. After plugging the mic in, the first and most obvious point I noted was how insensitive this mic is in comparison to many large-diaphragm capacitor mics — I'd estimate about 8mV/Pa. Apparently, the capsule and electronics have been "tuned for close live vocal use on the loudest of stages”. The polar pattern is obviously very tight — moving off-axis quickly resulted in the output level plummeting, especially in the mid-range and high end — and clearly this affords excellent feedback rejection for on-stage applications. This feature will also be a great asset for close-miking with a full band in a studio, to minimise unwanted spill from nearby sources.

The frequency response is balanced to give the flattest response with the mic placed about 150mm (six inches) from the source, with the proximity effect reducing at greater distances to give a leaner response below about 200Hz. At the high end, there is a relatively narrow, 5dB peak, centred at 9kHz, the level falling off rapidly at about 12dB/octave above 10kHz. This gives the mic a crisp presence, but it doesn't sound unnaturally harsh or artificial. In fact, I'd say the extreme HF has a fairly natural and smooth character reminiscent of a ribbon mic, in a useful way. Handling noise is well controlled, too, partly because of the very low sensitivity and a tonal balance aimed at close working, and partly because of a system of internal shock dampers supporting the capsule. Plosive popping is minimal, even when the mic is placed six inches in front of a vocalist — although I'd still use an external pop shield to supplement the mic's internal silk and mesh pop-filter, as much to keep the mic clean as anything else!

On a range of close-miked voices, the Edwina sounded full-bodied and clear, with adequate headroom and crisp fricatives that rarely ventured into sibilance. The high presence peak didn't suit all female voices, but generally worked nicely with male voices. The voice talent needs to be made aware of the relatively tight pickup pattern and the way the bass falls off rapidly with increasing distance, however — not exactly rocket science to a seasoned performer, but 'wandering minstrels' will find themselves getting rather thin and faint in the headphones if they don't maintain a consistent position in front of the mic

With the Edwina placed in front of guitar amps, I found the mic delivered a solid, big-bodied sound with plenty of cut and presence, but without the fizz that so many hyped large-diaphragm capacitors produce. The low-ish sensitivity also meant that I wasn't fighting with headroom margins and fully backed-off gain controls. Unfortunately, I didn't have the opportunity to try the mic as a drum overhead (and I only had one Edwina for the review), but I imagine it would serve well in this application.

Overall, then, this is an accomplished sounding microphone with distinctive styling and construction and an attractive price. If you like your mics on the 'quirky' side, the Edwina will be right up your street!

There are many similarly priced mics on the market with similar performance, but nothing that looks even vaguely similar to the Edwina!

Looking like something created by a plumber, the Edwina is actually an accomplished large-diaphragm mic with a tight cardioid polar pattern that makes it well suited to studio close miking and live-sound applications.