If you crave the vintage API sound but the budget is a little tight, this might be worth a look...

Although Earthworks, the company founded by David E Blackmer in the late 1980s after leaving dbx (he was the ‘db’), are best known for their line-up of wide-frequency-bandwidth microphones, they have for some time produced a range of Zero Distortion Technology (ZDT) microphone preamplifiers. ZDT in amplifiers was invented by Blackmer, in pursuit of his goal to create an amplifier that did not colour, distort or add noise to a signal passing through it, and the technology that he developed delivers distortion at levels lower than one part per million. 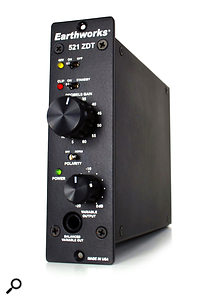 As well as his work in audio noise-reduction, Blackmer published research on the value of ultrasonic (above 20kHz) frequencies in sound reproduction, claiming that human hearing had a time resolution of 5µs or better, corresponding to a frequency of 200kHz, and this requires that audio equipment has a flat frequency response up to 200kHz. As an aside, a 2008 research paper by Milind N Kunchur (which you’ll find at http://bit.ly/1ONfgfj) supports Blackmer’s claim, discovering not only a human hearing temporal resolution of 4.7µs in a group double-blind test, but also that “while an ultrasonic frequency at a modest level might not be audible by itself, the ear seems to be sensitive to alterations in its strength as well as phase when it is present as a harmonic of an audible fundamental.” Building on Blackmer’s research, Earthworks’ microphone preamplifiers have a frequency response of 1 to 200 Hz ±0.5dB and 2 to 100 Hz ±0.1dB, and they deliver distortion of 0.0001 percent.

In the 521 ZDT, Earthworks have packaged the performance and circuitry of a ZDT microphone preamplifier into a single 500-series module. As you might expect from a preamp of this quality, its controls, indicators, metering and features are minimal and are comprised of phantom power on/off (with LED), a clip LED, a standby switch to mute the 521’s output, gain (+5 to +60 dB in 5dB steps), a power-on LED, polarity reverse (correctly labelled) and a variable attenuator that controls the level of the electronically balanced, TRS front-panel output. The main output can drive long 600Ω lines and, at the same time, the parallel front-panel output can feed either balanced or unbalanced inputs.

The 521’s quoted performance is pretty spectacular. In addition to its ultra-wide frequency response and distortion characteristics, its EIN of -132dBV at 20dB gain, slew rate of 22V/µs and an impulse response time of 1.4µs results in the 521 being very clean, very fast and very transparent with a noise floor below that of most microphones.

Circuit-wise there isn’t much to see inside. There are some socketed chips, a few full-size and surface-mounted components and the switches, but that’s about it. Its circuitry runs in Class A and the input and outputs are both transformerless and balanced. Input impedance is very high (10kΩ with phantom on, or 100kΩ when off) so there’s no loading of a connected microphone.

Sadly, I don’t own any mic that’s specified above 20kHz, so I had to make do with my usual AKG large- and small-diaphragm condensers and my Sennheiser and Shure dynamics. With all of those, although they don’t tax the extremes of the 521’s capabilities, the results were uniformly superb with an extremely natural, open sense of clarity and overall balance.

Since my own mic preamps are all coloured to a greater or lesser extent, it was really interesting to hear the ‘real’ sound of the members of my motley microphone collection. The lack of colour and noise was quite striking and offers the opportunity of adding all that at the mix stage, if required, for artistic effect. As I like parallel compression, it was useful to be able to feed a compressor from the front panel and to record the compressed signal alongside the uncompressed original.

The Earthworks 521 ZDT is a stunning microphone preamplifier. Its ability to deliver a noiseless, distortion-free, completely flat response across such a wide frequency range is something that I have never encountered before. All I need now are equally stupendous 192kHz AD/DA converters and recorders, some Earthworks microphones and a fully loaded rack of 521 preamps. If you’ve got the available budget, you should audition an Earthworks 521 ZDT as soon as possible — but be warned, you may want more than one!