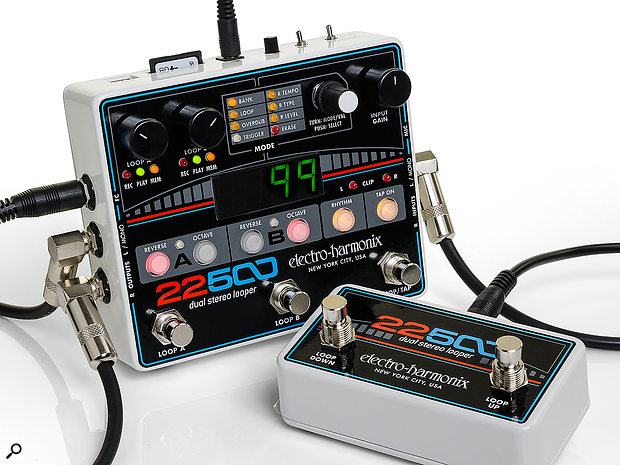 Gigging solo artists and lovers of layered repetition have seen the humble looper gradually evolve since the early days of recorded sound. The Electro-Harmonix 22500 is a dual-track stereo looper, with rather more beneath its rugged exterior than its CD case-sized footprint implies. You won’t get the best out of it without spending some time with the manual though; at the very least you’ll need familiarity with the sometimes cryptic abbreviations. Navigation through its various modes involves an encoder of the turn-and-push variety. An LED flashes to indicate the current mode and, with a push, the flashing ceases, meaning you can now update the values on the four-character display. It might just be me but this whole flashing/non-flashing business feels the wrong way round.

Bank selection is the first mode in the list but if it feels inconvenient to keep reaching down for an encoder, you might consider shelling out for the optional footpedal, which quickly steps through the 100 available banks. However you do it, each bank change stops playback, which kills any idea of building more elaborate structures than the two tracks can provide.

Both of the loops in each bank are stereo, and the left channel offers a choice between the XLR mic input or a regular quarter-inch jack. You could conceivably record a guitar and vocal part separately within the same loop, or other combinations as required. There are rear-mounted switches to enable phantom power and to toggle between microphone and instrument levels. Operation is mains-only and recording is direct to the supplied high-capacity (8GB) card, which gives up to 12 hours of uncompressed audio. Cards of up to 32GB are supported, and a single loop can be as long as six hours!

You’ll also find 16 drum loops on the card — audio recordings in several time signatures to play along with. Although these drop in pitch as you slow down, at least they match the tempo smoothly enough. However, the drums are routed through the same stereo pair as the recorded loops, which is either limiting or a creative challenge depending on your view point. For backup and restore, the card is accessible via USB or you can simply pop it in a card reader. It’s well worth exploring this side of things because you can incorporate user loops too — to a total of 100. This involves a manual process of creating folders, renaming WAVs and editing text files (with information about the tempo and beats/bar). It works but isn’t exactly slick.

Fortunately, the main business — that of making and overdubbing loops — is fast and efficient, whether you’re creating tightly synchronised patterns or free-running ambient passages in which the loop lengths bear no relationship to each other. Each loop (A and B) can be started and stopped independently and either can be a ‘one-shot’ — that is, fired off manually by pressing the relevant switch. Basic verse/chorus structures can be created with relative ease using ‘sequential’ mode, but even in the regular parallel operation, the undo and redo functions smoothly ensure those two tracks go further than you might expect.

Leaving traditional loopers in the dust, your audio can be flipped into reverse, transposed up or down like a virtual tape recorder, or aged using ‘Overdub Mode’. Setting this to a value of less than 100 makes overdubs grow quieter on each cycle of the loop, and with short loops this acts much like a regular delay. Further novel features include threshold-based recording, which is invaluable if you prefer to start by playing a note rather than kicking a pedal.

For those who require more tracks, MIDI I/O, stereo bounce-down and a separate metronome output, Electro-Harmonix offer the more expensive 45000 model. The 22500 is aimed (primarily) at guitarists who want a little extra adventure but don’t want to get involved with MIDI, internal effects and too many distractions. As such, it’s a solid, functional and surprisingly versatile little pedal.

Eschewing frills like MIDI implementation and stereo bounce facilities, the 22500 nonetheless includes some neat features not found in most loopers, and could prove popular with guitarists in particular.