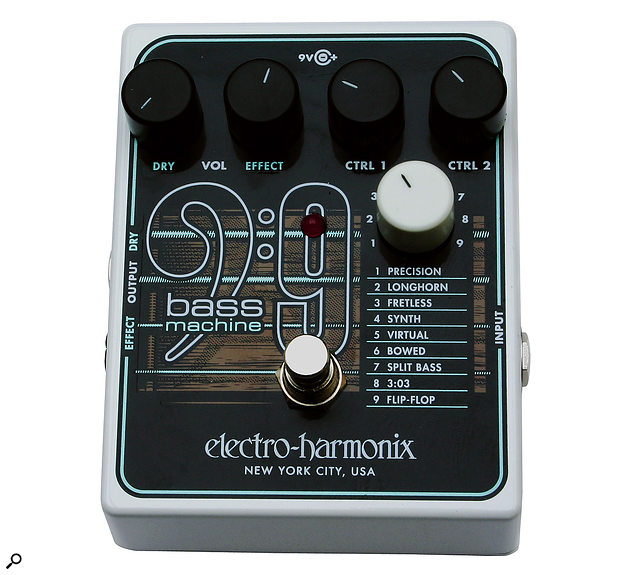 Electro-Harmonix's 9-series pedals all aim to transform the sound of an electric guitar into something else, and all follow a similar format. The first in the range was the B9 organ emulator, and this was followed by the C9, Mel9 and Synth9. All are polyphonic effects that work by taking the original guitar waveform and modifying it, using processes that include pitch-shifting and filtering, under the control of some very clever polyphonic tracking. The latest such processor is the Bass9 Bass Machine, which transforms the signal from a standard six-string electric guitar into one of nine different bass sounds. The polyphonic processing from the previous pedals is augmented by a new algorithm that's optimised for transposing one to two octaves down smoothly.

While most bass parts are played monophonically, the poly capability of this pedal means you avoid those odd sounds that might otherwise occur when playing a new note while the previous one is still ringing — and it does allow for playing a couple of notes at the same time when a part calls for it. (Strummed chords can sound a bit grumbly, of course, but who would strum a six-string bass anyway?) Normal playing comes across very cleanly, following the dynamics of the guitar well.

The control and connection layout is the same as for other pedals in the series: the dry output is wired as a buffered version of the input signal, and the effect output can be a mix of wet and dry signals. There are separate Wet and Dry level controls plus two control knobs, the precise function of which varies according the bass type that you select (via the nine-way rotary switch).

In the first slot is Precision, which emulates Fender's legendary bass guitar in a surprisingly convincing way. The sound changes slightly according to the pickup you select, and this provides some useful variation. The control knobs bring in a sub octave and can adjust the tone as per the original bass's tone control. Longhorn does a similarly convincing impression of a Danelectro six-string bass. Fretless adds a bit off a whine to the bass sound, so you get something approaching a fretless sound (but without the slides), while Synth provides bass pedal Taurus-like tones.

The Virtual setting is an interesting concept. It sounds like a real electric bass but the controls allow adjustment of the scale length and body resonance, so that users can fashion their own bass guitar sounds. Bowed goes some way to mimicking a bowed bass by adding harmonics and sustain, while Split Bass puts the bass notes only on the lower strings (notes below F#3) so the higher notes just play the straight guitar sound. 3:03 isn't a time check but rather a polyphonic tribute to a certain silver plastic box, while Flip-Flop is a take on EHX's own Octave Multiplexer, adding a smooth sub-octave generator.

Sonically this Bass9 pedal, which comes with a suitable PSU, produces beautifully believable bass-guitar sounds from a regular guitar, and where a sub-octave is available these can go seriously deep. The fretless and bowed sounds may not be perfect emulations but they do get you in the right ball park, and the synth sounds are suitably fat and squidgy too. There's no problem playing polyphonically, and that's more useful than you might think for a bass sound — though doing the 'Pin Ball Wizard' thing on a six-string bass will never sound wonderful! Normal playing is free of delay, glitches or pitching issues, and string damping sounds as it would on a real bass. So if you play guitar but don't have a bass — or don't want to lug one around just to play the odd bass part in a set — the Bass9 could definitely be of interest.