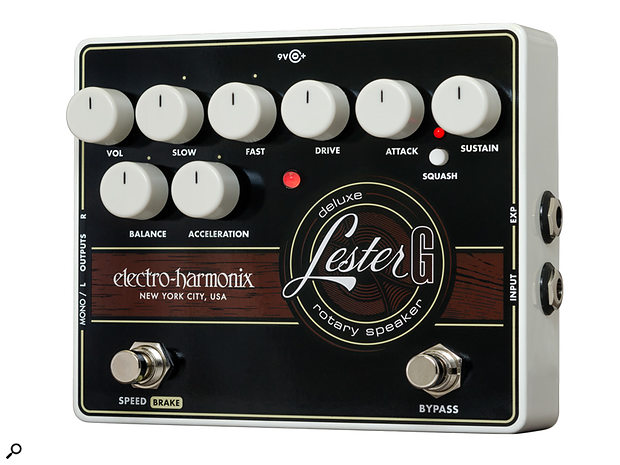 Rotary speakers, such as those made by Leslie for use with electronic organs, have a character all of their own, combining pitch modulation with both volume and timbral modulation. They have separate rotating mechanical elements to steer the low- and high-frequency sounds, the cabinet and horn tweeters impart a characteristic coloration, and the mechanical inertia of the drum deflector and the rotating horn means that speed changes take a second or two to happen. As the drum and horn are not sync’ed, there’s an interesting interplay, especially during speed changes. Then there’s the way the amp behaves when overdriven. All this represents quite a challenge to anyone designing an emulation!

Electro-Harmonix (EHX) have actually produced two versions of their Lester rotary-speaker pedal, one for keyboard players and the other specifically tailored to guitar. Each runs from its included (standard 9V DC centre-negative) power supply. The Lester K (for keyboard) is the simpler model. It can accept mono or stereo inputs and provide mono or stereo outputs, and has two footswitches for performance control. One operates a buffered bypass while the other acts as a slow/fast speed switch, but if it’s held for half a second or more it activates a ‘brake’ and slowly brings the rotation to a halt. A dual-colour (red/green) LED pulses at the LF (low-frequency) section’s modulation rate and a red LED shows when the pedal is active. As with the real thing, the HF (high-frequency) rotor speeds up and slows down much more quickly than the LF rotor.

Separate speed knobs are provided for the fast and slow setting, with the centre positions getting you very close to what you might expect from the real thing. The acceleration when changing speeds is fixed, but you can control the volume balance of the upper and lower ‘rotors’ as well as adding in some drive to approximate that overdriven Leslie growl. At its minimum setting the Drive control is bypassed. Although designed for keyboard, the input impedance is around 2MΩ, so it works just fine with guitar as well as keyboards. There’s also an overall volume control.

The Lester G (guitar) is based on the same emulation but differs in several respects, starting with the connections. You can still take a mono or stereo output from the device, but the audio input is mono only. A second jack socket hands over control of the speed to an optional expression pedal. With no pedal plugged in, the speed change works as it does for the K version, except that the G version has an added Acceleration control which determines the rate of speed change — if an expression pedal is plugged in, this Acceleration control is disabled. The other controls in the rotary section are the same as for the K, but on the right are two more knobs and a switch for adjusting an in-built compressor that feeds into the rotary section. Here, you can adjust the attack time of the compressor and the amount of compression (Sustain), while the button switch selects between two compression characters. These are termed Normal and Squash, the latter having a higher compression ratio. The LED above the switch lights in Squash mode.

Taking the Lester K first, I’m not sure that the overall sound nails a specific model of rotary speaker, but it certainly creates the right kind of effect. If you listen critically, there’s the slightest hint of flanger-like resonance that makes the end result sound a hint synthetic to a critical ear, but it’s nothing you’d notice when playing live. Patched after my B9 organ emulation pedal, the Lester K really does bring it to life, and though the effect is obviously more impressive in stereo, it sounds fine in mono. The slow speed is wonderfully trippy, while the fast ‘squirl’ really works in adding excitement to the sound. When you apply the brake it takes several seconds for the virtual rotors to come to a complete halt, and the glide between fast and slow speeds is also nicely musical. Dialling in some of the Drive control adds some welcome grit to the sound, and as this comes before the modulation, the overdrive timbre modulates just as it would in the real thing. Although EHX say this is a tube-style overdrive, to my ears the effect is not unlike overdriving a solid-state Leslie speaker, and I’d describe it as more ‘gritty’ than ‘growly’. 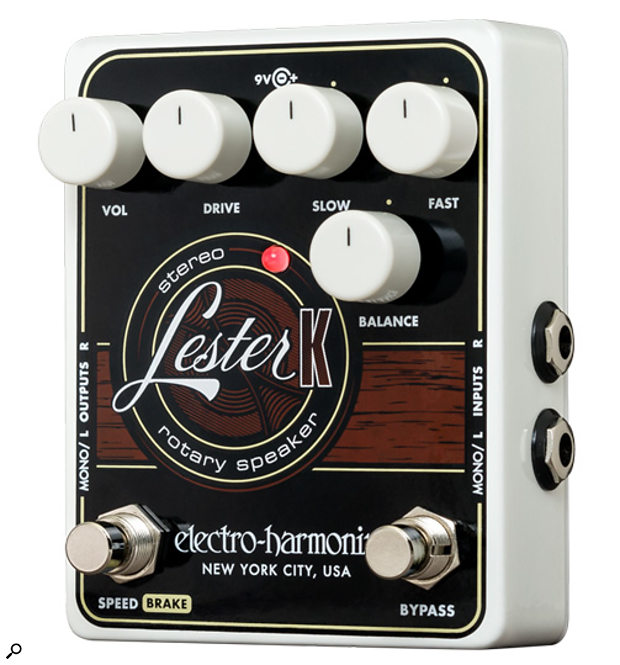 Moving over to the Lester G, the mono-only input is typically all you need for guitar. I’d probably opt where possible to use my own choice of overdrive pedal rather than the built-in Drive, but it’s not bad, and could be useful in adding just a touch of extra dirt when you switch the pedal on. Having a compressor built in is a nice touch, as the rotary effect sounds more dramatic if your notes or chords hang on for a little longer. In Squash mode you can get an almost organ-like sustain. Being able to adjust the speed change rate (acceleration) may be useful and I felt it sounded most natural set slightly slower than the default value.

Inevitably, the pedal changes the basic tone of any instrument fed into it (just as the real thing would), smoothing out the highs, emphasising the mid-range and also bringing up the lows slightly. Set a slow speed when processing guitar, add a touch of compression and you have an instant ‘Breathe’ or ‘Little Wing’ guitar sound. Switch to fast and you have the sound used for Cream’s ‘Badge’.

There’s a lot to like about both these pedals. The width of the Lester G may be an issue if you’re tight for pedalboard space, but if you already have overdrive and compressor pedals on there you could probably get by with the smaller Lester K. Every rotary speaker emulation sounds a little different, even if emulating the same model, as the sound of the real thing is affected by room acoustics and the placement and type of mic(s) used to record it. The real issue is not whether the emulations are 100 percent accurate but rather whether they sound musical and believable. To my ears, the default speed settings (controls centred) sound suitably authentic, and adjustment is barely necessary. Indeed, I can envisage a Mini version in the future, with just two foot switches and perhaps drive and volume controls. If you own a EHX B9 or C9 organ-emulation pedal and don’t already have a suitable rotary speaker emulator, you’ll be amazed at how much the Lester K improves the sound — so much so, in fact, that I think EHX really should be considering a more up-market organ emulation pedal, with the compressor and rotary emulation built in.

There are already several exceptionally good Leslie emulation pedals on the market by companies such as Neo (Vent) and Strymon (Lex), but these two EHX models are significantly less costly and on a musical level they still get the job done.