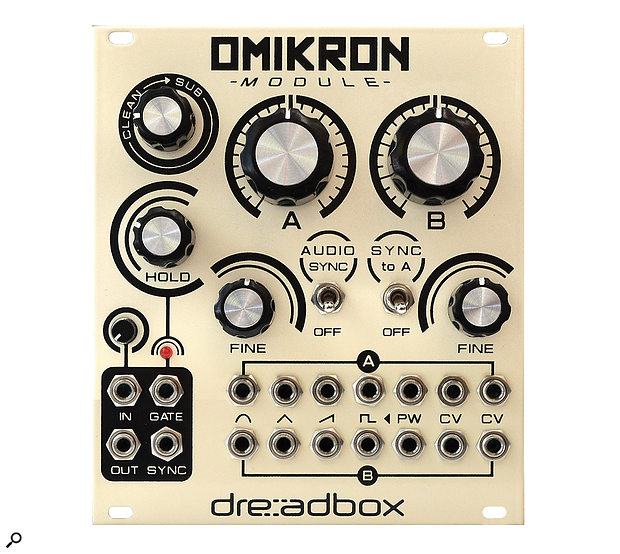 Plucked from the Dreadbox collection of modules, Omikron is a fairly large (22hp) dual VCO, while the Lamda is a 20hp multi-mode filter. Both are cream-coloured with chunky knobs set in more space than is typical for Eurorack.

Omikron’s oscillators (A and B) each have a large coarse-tune knob, plus a smaller fine-tune. Their range is a smooth progression from LFO rates (approximately 0.2Hz) to a quoted 9.89kHz, although the review model’s top end was nowhere near this. The numbers don’t represent the actual limits anyway, thanks to CV inputs that respond to ±12V! Each VCO has a pair of these inputs but neither is equipped with an attenuator. Should you require vibrato and a convenient way of controlling its depth, external patching between modulation source and input is called for, in my case using the generic ‘processor’ module of a trusty (and slightly rusty) Digisound. Also without an attenuator, the pulse-width CV accepts voltages of ±5V, thinning the waveform to silence at either extreme. As there’s no portamento or glide, this must be added as required, either at source or by plumbing in a slew/lag processor.

Both oscillators offer four simultaneous waveforms — sine, triangle, sawtooth and square — and they sound every bit as warm and alive as those of the Erebus stand-alone synth. I was slightly surprised to find no normalisation of any connections though. To drive both VCOs by the same voltage source, you’ll need a multi, which seems a bit of a waste. At least VCO B can be hard-synchronised to A, and the resulting tones are rich, searing and amongst the Omikron’s most impressive output.

Unusually, there’s another method of sync implemented too. The module’s left-hand side holds the clues: an audio input, plus a trio of outputs. When an audio source is received here, it’s converted to a raw pulse; this is then available as a sync source for the Omikron itself or for external VCOs that possess sync inputs. A square-wave sub oscillator (one octave down) is generated as a by-product and blended with the source before being sent to the mix jack. Input level is adjusted via a tiny knob and there’s a ‘hold’ control on hand to fine-tune the generated gate signal, although I found this to be of little value.

In use, neither the gate output nor the pitch analysis was entirely foolproof. Indeed, I only got acceptable results from the former by applying an envelope to the incoming source. Nor was I very surprised that conventional sync relies heavily on receiving relatively pure, monophonic input waves. Fortunately unconventional sync can be a lot of fun too and the results reminded me of a simplified, less responsive version of the Moog FreqBox pedal. Audio sync doesn’t completely override any incoming pitch CV and I found that, by reducing the input level, it created a tug of war between the two target pitches. File under ‘fascinating and quirky’.

In summary, the Omikron is a decent-sounding dual analogue oscillator that’s capable of LFO duties if necessary. Its strengths are in the number of simultaneous waveforms and a sync that has a different flavour to most. Its weaknesses are the omission of CV attenuation, normalisation and portamento, although Dreadbox indicate they will add normalisation in the next hardware revision. 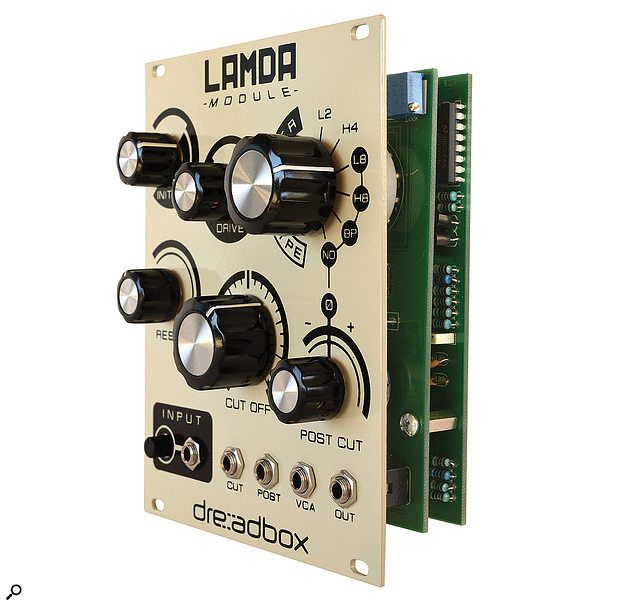 The Dreadbox Lamda is a plain-looking 8-pole (48dB) state-variable filter without so much as an LED to reassure you it’s powered on. There’s a single audio input complete with mini-knob attenuator and six modes to choose from. Of these, four offer a second frequency control, Post-Cut. The module boasts an integral VCA with an initial level control and post-filter drive circuit. Drive introduces a mild but tasty distortion and, if you wish, you can bypass the VCA by upping the initial level as on, say, an ARP Odyssey.

There are CV inputs for the filter cutoff, the Post-Cut and the VCA. None have an attenuator, which feels a bit like corner-cutting. As there’s only one physical input for each, you can’t, for example, modulate the filter with both an envelope and a key-tracking voltage. To do that requires an external CV mixer. However, since the filter isn’t designed to follow a 1V/oct source accurately, you’re unlikely to use the self-oscillating resonance as an extra oscillator. If you employ the VCA input’s full range (±12V), beware as this can drive the module quite brutally, hence the manual recommends ±5V.

The Lamda is descended from the earliest Dreadbox guitar pedals and is unusual in having eight poles that can be reconfigured and combined to produce multiple filter types. Perhaps the first thing that strikes you is the lack of a 24dB low-pass response. It begins normally enough, with a 2-pole (12dB) low-pass and a 4-pole high-pass, with the former a bit too dark for my tastes and lacking in the acidic wonder present in the Erebus module. At low cutoff values and with resonance close to self-oscillation, a fair degree of distortion is introduced even before you crank up the VCA.

Turning the selector dial, you arrive at the 8-pole low-pass mode — the first in which the Post-Cut feature is engaged. Some of the poles can now be fine-tuned — an effect that sounds as if a second filter has been overlaid, shifted above or below the primary. I can’t say that the muddy, moody tones really appealed to me, and this was also the case for the next mode, the 8-pole high-pass. Having such a steep roll-off ensures the filtering is quite unsubtle, often leaving the two frequency knobs operating within a narrow band of usefulness. In most cases, it’s not until you boost the resonance that the Post-Cut feature begins to justify its existence.

The band-pass mode wasn’t exactly brimming with character either, so it was with some relief that I turned to the final mode, notch, to find a filter I could delight in. With a smidgen of VCA drive, a healthy offset of the Post-Cut control and twin resonant peaks nestling on the edge of feedback, this filter delivers dirty, sync-like mayhem and sits in a mix like a fuzzed-up MS20.

In time, I warmed to some of the other modes too, but never felt it was obvious where the sweet spots were going to be. If you can dedicate a couple of envelopes or LFOs to it, the most distinctive Lamda sounds come from modulating the main cutoff and Post-Cut frequencies separately. And while the tonality and appeal of classic analogue filters are beyond its reach, the Lamda’s own dark, dirty and different character isn’t entirely without appeal. Few filters offer such flexible topology and I won’t deny that the distortion and dual resonant peaks supply a unique, gritty charm. Whether that’s enough to distinguish the Lamda from the wealth of other filters, I have my reservations.

Mastering Essentials Part 3 - How loud should I master?
1 week 15 hours ago.