Any viewer of dramatic or suspenseful television may have noticed a new trend for interesting sounds emanating from acoustic instruments, with stringed instruments especially providing fertile territory for unconventional sonic interest. 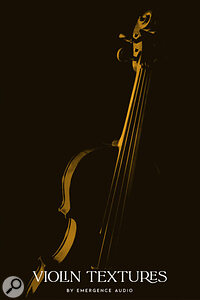 Step forward Emergence Audio, with a new library centred around a single violin, but with no ambitions to provide the more usual legatos and detached articulations. Violin Textures is an accurate and apt product name, as the provision of textural effects is undeniable. This instrument conforms to the NI Kontakt library format, occupying a healthy 1.91GB is disk space. There are 12 onboard articulations, but these adopt the form of extended samples that play out over time. You’ll not be able to play any quick or melodic phrases with any ease, but playing long notes of extended and meandering chord sequences will supply enormous interest as each sample unravels. These samples range from the more usual Normale, to Flautando and Sul Pont, with a number of muted options too. The Detached sample provides a series of pulsed articulations, also appearing in a reversed form.

Two samples may be layered, with independent control of each sample/partial layer. These layers are co‑joined by a central Balance pot, which enables a seamless fade from one partial texture to the other, which is also controlled via your hardware’s mod wheel. As each partial is equipped with its own four‑stage envelope setting, with accompanying low‑ and high‑pass resonant filtering, it’s possible to use the same sample within each layer, but completely change the audio characteristic. Samples may also be radically or subtly detuned, and in the case of the Detached sample, could induce Reich‑like violin phasing, as each articulation faintly drifts in both pitch and timing.

The central Balance pot also provides other performance opportunities, being linked to the onboard LFO, which immediately syncs to your DAW. This allows the prospect of pulse creation, between one sample layer and the next. Armed with five waveforms, which includes random, the LFO allows smooth or exaggerated gating from one side of the instrument’s layer to the other, inducing really interesting textural juxtapositions. Moreover, the LFO is open to the control of other elements, such as the filter’s cutoff and resonance, and sample layer panning and volume.

The instrument’s second page provides a very healthy contingent of effects. These include convolution reverb, distortion and chorus, and the rather wonderful Rotator effect, which plays havoc with the panning while supplying a phase‑inducing texture.

Being within the Kontakt construct, there are almost inexhaustible options for MIDI CC automation, and while this instrument could easily be dismissed as a one‑instrument pony, within its textural realm it reigns supreme. The editable elements are truly appealing, but the included 100 presets will quickly get you off the blocks if you require inspiration. For interesting and truly organic textures, this is a highly engaging instrument which is riding high in its sonic popularity at this point in time, and at a price which feels extremely reasonable.