German manufacturer EMES return with the Black TV Actives, a set of full-range nearfield speakers that can be used with or without the optional Amber subwoofer.

EMES is a company that is not afraid to look in new directions if existing solutions don't meet their needs, and the system under review is a good example of that approach as the nearfield speakers use dual-concentric drivers rather than the more common separate tweeter configuration. Unlike the Tannoy dual-concentric system, which uses a pressure driver at the centre, the EMES tweeter element looks much like a conventional soft-dome direct radiating device. 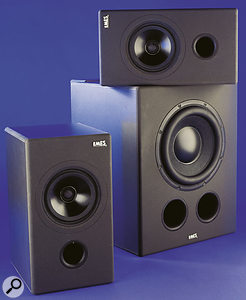 Photo: Mike CameronThe review system comprised the EMES Black TV HR active nearfield speakers plus the EMES Amber HR active subwoofer, though other combinations of EMES components are possible. The sub handles the active crossover filtering for the connected nearfields and also includes inputs and outputs for a centre speaker for use in 3.1 or 5.1 systems. This combination provides full-range monitoring for the project studio and smaller commercial facility at a system cost of under £2000. Perhaps the best way to approach this system is by looking at the individual units first, then considering their performance as a system.

Based around a single 17cm polypropylene cone driver with a time-aligned one-inch neodymium tweeter mounted at its centre, the Black TV HR Active is an active, bass reflex design measuring 380 x 210 x 250mm. The driver motor is based on a neodymium magnet and is powered by two 100W RMS amplifiers fed from a fast-response switched-mode power supply. One feeds the tweeter coil, the other the bass/mid. The driver is screened for use close to CRT monitors, and a number of DIP switches are provided on the rear panel for adjusting the level, low EQ and high EQ. The reason for choosing a co-axial design is that the monitors operate more nearly as a perfect point source of sound, which in theory delivers better stereo imaging and a much wider sweet spot than conventional designs. The downside is that good dual-concentric drivers are difficult to design and expensive to build. Having both drivers mounted on a common axis means the dispersion is the same in both the horizontal and vertical planes, so they will work just as well on their sides as in 'portrait' mode. The crossover frequency frequency is 1400Hz and the frequency response without the sub is specified as 43Hz to 20kHz ± 2.5dB, which means the Black TV is a very respectable full-range nearfield monitor in its own right. 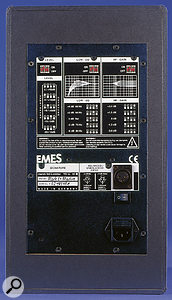 The DIP switches at the rear of the Black TV Actives allow user adjustment of the input sensitivity, low- and high-frequency response.Photo: Mike CameronThe cabinet is constructed from MDF with an attractive grey laminated finish augmented by rubber corner mouldings that also double as anti-slip feet. All the sockets and DIP switches are mounted on the rear panel heat sink along with the IEC mains inlet and power switch, the connection protocol throughout being balanced XLRs only. Three sets of four DIP switches allow the input level sensitivity to be set in steps from +15dB down to -13dB (balanced) or from 0dB to -28dB unbalanced, so virtually any balanced or unbalanced source can be accommodated. A green front-panel LED indicates that the speakers are powered up and this doubles as a warning LED, flashing red in the event that the amplifiers become overheated due to extended very high-level listening.

Bass-end adjustment is provided in 16 stages via the second row of DIP switches offering the usual more, less or flat options. These will be more useful when the monitor is used on its own as the bass end is rolled off anyway when used with a subwoofer. The high end is adjusted via the last set of DIP switches between 4dB of high-end cut and 5dB of boost. The reflectivity of the room surfaces may require this setting to be tweaked, but it's equally valid to make small adjustments to account for listening preferences. I carried out all my tests with everything set flat and found no need to make any changes.

The Amber HR sub is built around a 10-inch, dual-coil driver that uses a paper/glass fibre cone where each coil is fed from a pair of 80W amplifiers (presumably in bridge mode) making the total power 320 Watts. A conventional 'analogue' power supply is used. The long-throw driver is mounted in a substantial MDF bass reflex enclosure styled to match the Black nearfields and has a free field response of 38Hz to 2kHz, though the internal active filtering means that the high limit is only ever 80Hz or 150Hz depending on the crossover setting chosen by the user. A further permanent 'sub-audio' low pass filter set at 15Hz prevents the sub from wasting effort reproducing very low frequency information below the range of human hearing and, more importantly, below the frequency at which its port can provide proper driver loading.

The overall size of the Amber sub is a not-unreasonable 380 x 480 x 400 mm, including the 'pod' on the rear panel that houses the XLR ins and outs for the left, centre and right speakers as well as the DIP switches and IEC power inlet. 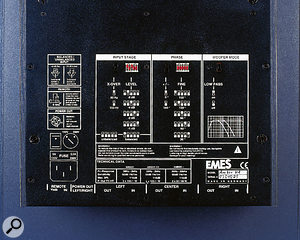 The switches on the back of the Amber subwoofer allow a great deal of user customisation; you can adjust input sensitivity, crossover frequency, and phase to tailor the sub to different monitoring environments. But you need to know what you're doing!Photo: Mike CameronThe switches allow the input sensitivity to be set in steps from 0.45 to 4.5V and it's also possible to choose a crossover frequency of either 80Hz or 150Hz. This is useful, not only because music and video producers tend to work with different crossover frequencies, but also because the placement of the sub relative to the nearfields may affect the subjective performance differently depending on the crossover setting. The DIP switches also allow for polarity inversion and incremental phase adjustment from 30 to 150 degrees, which may be necessary if the sub is substantially in front of or behind the nearfelds. However, this needs specialised measuring equipment and expertise to set up accurately, so it's probably best to leave the phase switches alone and try to keep the sub in more or less the same place as the nearfields.

I compared the system against my Mackie HR824s as well as some other monitors I had at the time, and my initial impression was very positive. I like speakers that let you almost listen 'through' them into the performance so that you can separate the different instruments in a complex mix. The system was very much like my Mackies in that respect with lots of depth and detail but not compromised by harshness. Furthermore, although the bass end seemed to integrate perfectly with the rest of the spectrum, it didn't seem to muddy or obscure the mid-range, which is a common problem with many full-range systems I've heard. The speakers also go adequately loud, though you can make the warning lights nervous if you're the type who likes to monitor at punishing levels for long periods. At sensible listening levels, the sound is both huge and clear with all the depth you could wish for, but at the same time, the contribution of the sub is never overstated. If you hear a system with a sub and it actually sounds as though it has a sub, then it's either a badly designed system or it is not set up correctly.

An effective studio monitor has to convey the information that you need to make sensible mix decisions; it has to spotlight shortcomings such as distortion, and it should be pleasant to listen to for long periods. The EMES system meets all of those needs as well as could be expected from a full-range system within its price range, and I have to admit that I really enjoyed listening to music on them. The stereo imaging is also good with no radical changes if you move listening position.

While the system represents good value given its performance, there must be some cost penalty in using what is ostensibly a full-range speaker (the Black TV Active) as a satellite as it is engineered to produce adequate bass end when working without a sub. When used with a sub, its input is filtered below 80Hz or 150Hz, so its low-frequency potential is unused. This contrasts with systems such as those produced by Blue Sky, where the satellite speakers are designed specifically to work with a sub and so don't need to have such an extended low-end response. This also allows the satellites to be made physically smaller. That comment aside, I liked the EMES system very much and the cost, given the quality of performance, is still very reasonable. Selling monitors is a tough game at the moment, because there are so many good models to choose from in the low to mid price range, but this system certainly deserves closer attention, especially if you need depth from a compact system.

The EMES system performed very well, and though it comes towards the top end of the price range for project studios, it is worth checking out, especially if your music requires that depth of bass.