Erica’s new Graphic VCO is a digital wavetable oscillator on which you can draw and save your own waveforms and wavetables. At 16HP, it packs a lot of features into a relatively small package. 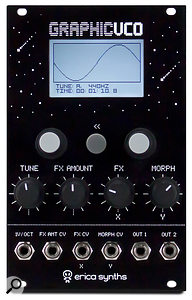 Size: 16HP. Current: +12V = 152mA, -12V = 20mA.The bulk of the functionality revolves around a small but sharp LCD screen, two multi-function, clickable encoders and a button. With these three controls you navigate, select, draw, load, save, etc. Underneath the two main encoders are four potentiometers. Their function can change depending on the current mode and whether you have CV patched into the four associated input jacks. Their primary functions are master tuning, effect amount, effect value and wavetable morphing. The front panel is completed by two output jacks. Output 1 carries the main wavetable signal and Output 2 carries a mix of sub-oscillator and wavetable.

Speaking of things that are yet to be implemented, there is a micro-USB port on the back of the unit which can be used to update the operating system and to upload new wavetables via a yet to be released Google Application. Erica Synths say this will allow better wavetable management, including the ability to upload your own waveforms as well as the opportunity to share wavetables with other users.

Further manipulation of wavetables is possible via effects, which have their own dedicated sub-menu. You can choose one of the following: frequency modulation, ring modulation, phase distortion, wavefolding, wavewrapping, bitcrush and sample rate reduction, and overdrive. The effects are simple but can be dramatic in mangling the wavetable in interesting ways and really come alive under CV control. Each effect can be modulated by either the FX control, external CV input or an internal modulation oscillator.

The sub-oscillator is the last element in the sound-shaping toolbox and is pleasingly flexible. There is a choice of Sine, Triangle, Saw, Ramp, Square and Copy waveforms. Copy is a duplicate of the main wavetable waveform. Detune can be from zero semitones to two octaves and fine-tune is also possible. This means the sub-oscillator can be used not only for traditional sub duties but also for creating 2-voice intervals and unison detune effects, which is most welcome.

When in AB Wave mode, you can edit either of the two waveforms via a dedicated waveform editor and save the result as a new waveform. In Edit mode, a click on the left encoder opens a menu of tools which include Pen, Line, Draw, Spectral and several waveforms. With the waveform tools, you can select a portion of the overall waveform on which to create a single period of your chosen waveform, the amplitude of which you control with the right encoder. Once you’re happy, you can move the markers and create another period elsewhere in the overall waveform, or switch tools and create a different shaped section.

The Spectral tool is a little different. Use the left encoder to select one of 32 harmonics along the bottom of the screen and use the right encoder to add varying amounts of that harmonic to the existing waveform.

The Line tool, as you’d expect, draws lines. You move a pen around the screen using both encoders, click the right encoder to start the line, move the pen again and click the encoder again to finish the line. Then there’s the Draw tool, which feels nostalgically like an Etch A Sketch in Eurorack format!

Next you’re going to need to save the waveform and build a wavetable. Click the Save tool and select either a new or existing wavetable and one of the 16 slots within. You can name your waveform and wavetable at this point. A wavetable doesn’t need 16 waveforms, it can have less and the in-between waveforms will be interpolated automatically. In total, the unit can hold 64 wavetables and 1024 waveforms.

There are some features that will appeal to those performing live. Snapshots allow you to save the state of the sound engine — mode, wavetable selections, effects, etc — allowing you to quickly recall specific setups. There’s a timer which can be reset on the oscilloscope screen — handy for timing gigs. The unit is skiff-friendly too and has a built-in quantiser, which might help free up valuable space in your travel rig.

The sound is clean, modern, punchy and detailed thanks to the unit running at 96kHz — quite different to some low bit-rate wavetable oscillators on the market. Wavetable interpolation is smooth as butter and with the built-in effects you can dirty things up in many different ways. The module scores highly on the sound front.

In practice, drawing your own waveforms on the Graphic VCO feels like a mixed bag. The Spectral tool is genuinely useful for building additive wavetables, but some of the other tools feel awkward, at least with my fat fingers. The forthcoming application sounds like it will help greatly in the endeavour of creating your own wavetables, but even in general use, some menu-diving is unavoidable. If you don’t mind that, the Graphic VCO is a very capable oscillator module with excellent sound quality and a lot of features that could make it the right choice, especially if live performance is your thing.