Even Harmonic's GTAK is a low-cost utility that uses Kontakt's KSP scripts to allow Kontakt 3 (it won't work with earlier versions) to be controlled by a MIDI guitar as easily as it can be by a keyboard. 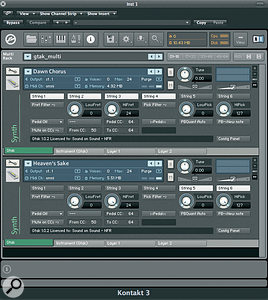 GTAK turns NI Kontakt 3 into the perfect sound palette for MIDI guitarists.Polyphonic keyboards usually send all note data on the same channel, which means that pitch-bend and other controllers apply globally. MIDI guitars, by contrast, use a separate MIDI channel for each string, so that, in effect, each string controls a separate monophonic instrument with its own pitch‑bend and other characteristics. The MIDI protocol caters for this with Mode 4 (mono mode), but with most software instruments, you have to load up one instance for each string, and then configure all the necessary MIDI channels and bend parameters each time you change patches. Fortunately, Kontakt includes provision for special scripts, known as KSP scripts, with which you can modify its behaviour, and GTAK makes use of these to turn Kontakt 3 into a MIDI guitar‑friendly animal.

Instead of loading six instruments and then assigning them to separate MIDI channels, you simply load the GTAK 'Multi' in Kontakt, and then select from its library of instruments, all of which are based on the excellent Kontakt 3 core library. So if your computer can run Kontakt 3 (you can always download the free trial version to make sure), it can also run GTAK.

Up to 64 separate instruments can be loaded at the same time, and the GTAK interface lets you switch individual guitar strings on or off for each one, as well as allowing you to configure MIDI pedal functions in a very direct way; obvious choices here are things like hold and sustain. This makes it easy to set up string splits or to make use of some of the more esoteric MIDI guitar functions, such as the string‑position control offered by the Axon hardware. The system also includes something called Smart Controller Routing, designed to route controller data to whichever Kontakt instrument played last in a patch comprising two or more instruments. It's also worth noting that GTAK not only delivers the Kontakt sounds in a more friendly format, but also includes specially optimised versions of the built-in arpeggiators, sequencers and drum machines. Apparently a lot of effort was put into making the monophonic instruments work properly too. The way this is handled is that when you play across a chord, only the last note played actually sounds. If you then kill the last note, the previous one sounds again, providing it is still sustaining, just as it would with a keyboard.

By default, GTAK is set to expect the guitar controller data to come in on MIDI channels one to six, with the pitch-bend range set to 12, but you can customise this if you need to. As instruments are loaded, they need to be set to Omni mode, so you may wish to make this the default in Kontakt's preference options if you're a regular MIDI guitar user. All settings when using the plug‑in version are saved with your song file in the usual way.

The outcome of all this is that you only need to set up one patch on your MIDI guitar controller box, so that the correct MIDI channels are output with pitch‑bend switched on and set to 12 semitones. After that you don't need to touch it again, because any bend‑quantise options are handled by GTAK on a per‑intrument basis. Once the GTAK Multi has been loaded into Kontakt 3, you have life as easy as any keyboard player. In fact, you arguably have it easier, because you get the benefit of independent note‑bending and vibrato!

It would be great to see this kind of provision built into all software instruments — or better still, the DAWs that host them — but in the meantime GTAK offers a lifeline to Kontakt-based MIDI guitar users. Given its low cost (69 Euros is about £60$95 at the time of writing), and the fact that it is designed by a MIDI guitar user to overcome real problems that he'd experienced for himself, anyone who plays MIDI guitar and who owns Kontakt 3 would do well to invest. Paul White

Even Harmonic's GTAK is a clever Kontakt 3 KSP script application which turns Kontakt 3 and its built‑in library a great, expressive sound library for anyone with a MIDI guitar system.