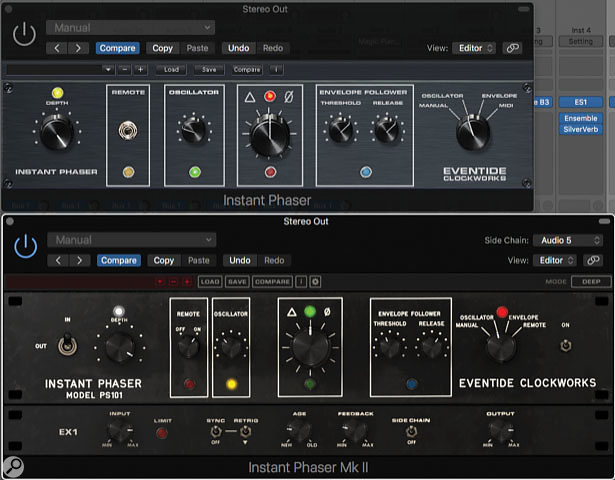 Eventide's rackmount Instant Phaser was launched in 1972 with the aim of recreating tape flanging — which, as I recall, we used to call tape phasing back in the day. Electronic phasing didn't have the necessary delay time to produce a true tape flanging effect, but it got close and soon became an effect in its own right. Eventide have long offered a plug-in version of that original hardware, and now they've revisited it to add both new capabilities and the ability to 'age' the circuity by introducing modelled component value drift. They've also made the behaviour of the emulation more faithful to the original hardware. If you already own Eventide's Anthology bundle, you get the new Instant Phaser MkII free of charge.

The hardware employed analogue multiple phase-shift stages based around all-pass filter networks that used FETs and RC networks wrapped around 741 op-amps, which gave it a smooth, musical sound. Modulation came from a 'not quite triangular 'LFO or from an envelope follower. As I recall, the 741 wasn't the quietest of chips but Eventide clearly got the best out of it. The sonic performance of that original analogue circuitry has been replicated in software complete with all the imperfect behaviours that circuitry produced, including the LFO shape. However, Eventide decided that a few additions would be worthwhile to make this phaser of the past more useful in studios of the present — and I suspect that includes ditching any unnecessary circuit noise.

This MkII version of the plug-in features a simple Age knob, which allows you to simulate the required degree of component value drift in the circuitry making up the phase-shift networks and the LFO. The range of this control goes beyond that of reasonable ageing to the point of 'completely knackered', though some interesting sounds can be produced by invoking excessive ageing. Once past 80 percent the effects become very apparent.

A newly added Mode switch provides three different phasing characteristics denoted as Shallow, Deep and Wide. In Wide mode, a different amount of phase shift is applied to the two channels, enhancing the sense of stereo spaciousness. Feedback adds resonance to the effect in the expected way and is a practical if obvious addition.

While a typical phaser pedal is driven only from an LFO modulation source, the Instant Phaser still has four modulation options: Oscillator, Manual (using the large phase knob), Envelope and Remote (MIDI). A newly added side-chain function allows the envelope follower source to be taken from a different DAW track, and the LFO can now be sync'ed to host DAW tempo with a choice of multiples. A new, automatable momentary Reset switch forces the LFO back to the start of its cycle. Depth sets the mix of dry and effected signal, but only goes from a 50/50 mix to all wet, so there's no way to fade the effect fully in and out; I did contact Eventide on this matter and while they couldn't commit to anything definite, I think it is safe to say that the matter is at the 'we'll think about it' stage for a future update.

Sonically, the MkII sounds a little more organic than the original plug-in, especially when you want to add subtle movement without the phasing effect becoming too obvious. The Wide mode creates a useful sense of stereo spread and movement, while increasing the feedback amount produces the familiar and far more obvious resonant phasing effect. That ageing control is also effective in changing the character of the effect in an organic way; things get very warbly and weird when you get past 80 percent, but sometimes warbly and weird is just what you need. A large choice of factory and artist presets shows off the versatility of the effect.

All in all, this is a very significant update to what was already a great-sounding phaser plug-in, and if anything can rekindle your love affair with phasing, the Instant Phaser MkII is it.