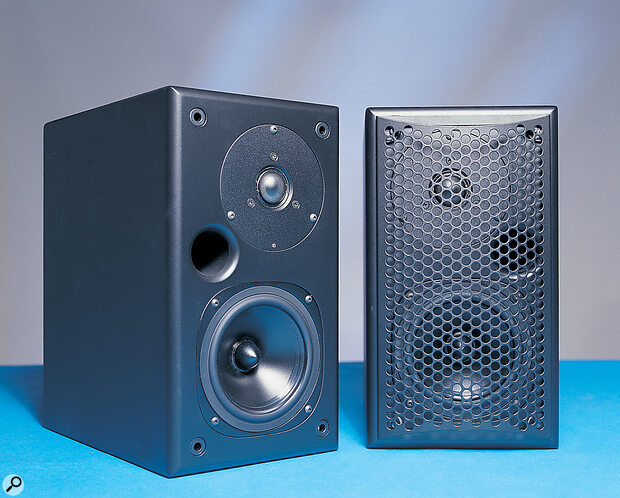 Hugh Robjohns tests a new monitor that has already acquired some major users.

Excel are a relatively new name in the mini reference‑monitor marketplace. Established four years ago, their products are already popular with such discriminating customers as the BBC and other major broadcasters. The 101A is the smallest monitor in their range, but all of their models are similar two‑way ported designs.

The 101A employs a two‑way active design and is intended for use with desktop editing systems, or as a portable reference for travelling engineers. With physical dimensions of just 320 x 180 x 280mm (hwd), and with a 12kg weight, carrying these compact monitors around is not too much of a problem at all. The cabinet is finished in a resilient textured black lacquer, although wood veneers can be supplied to order. A drilled, arched metal grille protects the drivers, but looks rather industrial — reminiscent of certain PA speakers I've seen, in fact. Fortunately, the grille can be removed easily if you wish, though this exposes the tweeter to damage.

Both drive units are sourced from Dynaudio, to Excel's specifications, with a 28mm soft‑dome ferrofluid‑cooled device for the top end. This is rated at 1kW peak power, so blown tweeters should be extremely rare! The tweeter face plate incorporates a small blue LED to indicate when the speaker is powered. A magnetically shielded, 140mm polypropylene cone driver provides the bottom end. An integral phase plug aids cooling, reduces power‑compression, and improves off‑axis response.

The reflex cabinet is constructed from MDF panels braced internally and pressure glued. A 38mm port vents to the front and the system is optimised to provide a useful bandwidth between 60Hz and 20kHz. The maximum sustained rated acoustic power output is 104dBSPL at one metre. A pair of vertical heat sinks dominate the rear panel with the audio and mains connectors nestling between them. The IEC mains inlet has an integral fuse holder and a power switch with slow‑start circuitry, while the only other facility is a three‑pin XLR socket for the line‑level balanced input — there are no level or equalisation controls at hand to mess up! The specs suggest the 101A can accommodate a range of nominal input levels between ‑10 and +4dBu.

Internally, the 101A's are nicely put together with a substantial torroidal transformer and a small fibreglass motherboard. It would appear that the same basic circuitry is used in all three of Excel's current monitor speakers, with TDA7294 amplifier chips (capable of producing 80 Watts RMS) powering each of the drive units. Two vertical daughter boards appear to carry the active crossover components — a minimum‑phase design. There are also a number of links on the main PCB labelled 'Option', which I understand can be used to tweak the frequency response of the speakers, though they are clearly not designed for casual adjustment by the end user.

First impressions of the 101As suggest a powerful, neutral and revealing monitor. I have to say straight away that, compared with my own reference PMC TB1s, the Excels sound a little bass‑light. However, the PMC design provides a far greater LF extension than is typical from any comparably sized box. By way of compensation, the bass produced by the 101As is tight and fast, with plenty of detail — it may be lean, but it's never overblown or tuneless! The mid‑range is blessed with high levels of detail too, and both spoken and sung voices are portrayed very naturally indeed — there is excellent spatial and tonal definition with lots of depth and clarity.

The speaker seems to have a wide dispersion which remains fairly uniform throughout the crossover region, ensuring a wide and stable stereo image. In any normal nearfield situation, the level of these little speakers certainly won't be found wanting either — substantial volumes are possible for extended periods without apparent strain.

I would like to hear the 101As together with their matched 802FEU subwoofer system — I should imagine the combination would make impressive and informative listening. With slight reservations about the inherently restricted LF performance, these are very promising little speakers and definitely worthy of adding to your auditioning shortlist.

A diminutive nearfield speaker based on well‑proven design principles and components. Although the LF performance is inherently restricted, the overall quality is neutral and revealing, making it a worthy contender for the reference monitor appellation.