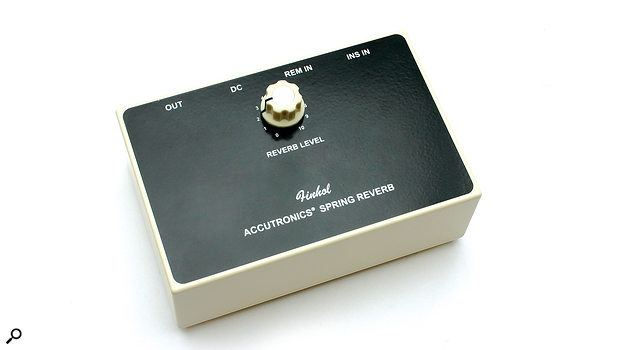 Can a real spring reverb really fit in a box this small and still come up with the goods?

Exactly as its name suggests, the Finhol Accutronics Spring Reverb is an analogue reverb box, at the heart of which lies an Accutronics spring reverb tank. Power comes from an included 9V switched-mode power supply (there’s no battery option) and there are input jacks for your instrument and an optional remote bypass switch, which enacts a true hardwire bypass. Also on a standard TS jack is the mono instrument–level output. The reason there’s no footswitch on the box itself — something you’d expect of most ‘stompboxes’ — is that spring reverbs are extremely sensitive, so even though the reverb tray may incorporate some type of isolation, clicking the switch would still produce a loud old–school ‘boing’ (you can always kick the box if you really want that effect!)

A single control regulating the amount of reverb added to the dry sound sits alone on the top of the 145 x 95 x 50 mm cast–aluminium case. A maximum reverb time of three seconds is specified and this is fixed, though it sounds somewhat longer than that to me. The classic Accutronics sound is based on a fairly long spring tank, often extending the full width of an amplifier cabinet. The Accutronics–branded unit used here, though, is only around 130mm long and is completely enclosed in a plastic shell that’s bolted directly to the base plate of the case. All the analogue circuitry is on a board that piggy–backs onto the spring unit using a mix of surface–mount and discrete parts.

Sonically, the dry sound appears to pass through unscathed and the added reverb is free of excessive hiss. The spring itself, though, is too microphonic to allow the unit to be placed on top of a speaker cabinet or combo without feedback becoming a problem. A better option might be to stand it on the floor atop a slab of acoustic foam. For my tastes, when used with electric guitar other than at a mix level of three or below, the reverb sounds too long and too unfocused to integrate properly with the dry sound. The impression I get is of dry guitar plus some rather disconnected reverb sloshing around in the background. Adding just a small amount does take away the dryness from a sound without making it seem obviously processed, and it also works fine for warm jazzy chords. However, if you turn it up to use as a more obvious effect, that magical sparkle just isn’t there.The effect works well enough on acoustic or classical guitar, as long as, once again, it is added in moderation. This adds a kind of large–hall ambience that fills in the spaces without getting in the way, but again the reverb and dry signal seem to struggle to integrate.

Overall then, while I applaud the intention to put the classic Accutronics sound into a box the size of a large pedal, I don’t think the designers quite got it right for most users. If you need a long, warm reverb, then you might well find a place for it, but for those of you seeking the richness of sound that an electric guitar combo with a long spring tray fitted can give you, then you may be better off trying one of the many digital spring–emulation pedals, as they can sound very musical as well as being far more controllable. Alternatively, if you really want the real thing and have more money to play with, you could investigate the rather better–executed (and much more pricey!) Demeter RVB1 Reverbulator spring reverb pedal. Paul White