Think of Sergio Leone, and Ennio Morricone’s theme from The Good, The Bad & The Ugly springs to mind: an eerie ‘oo‑ee‑oo‑ee‑oo’ ethnic flute phrase answered by a voice and harmonica ‘wah wah wah’ triggers a frenzied outbreak of whistling, diabolical chanted monosyllables, a viciously twanged Shadows‑style guitar, ‘ah‑ee‑ah‑ee‑ah’ vocals, manic kazoo‑like trumpets, tubular bells and Lord knows what else. Recorded in 1966, this colourful work marks a high point in director Leone’s and Morricone’s collaboration, which also spawned the legendary Fistful Of Dollars trilogy. 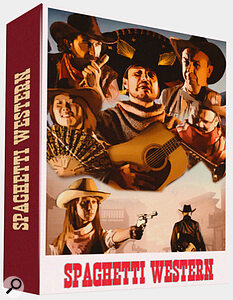 Morricone fans will be pleased to hear that his compatriots Fluffy Audio have created a sample collection inspired by the composer’s striking cinematic soundscapes. Spaghetti Western (20GB installed) gathers together the instrument and vocal sounds of the gun‑toting Wild West in a library that requires the full version of Kontakt 5.8.1 or above, and is not compatible with the free Kontakt Player.

There are so many good sounds in here that I hardly know where to start. A majestic clean‑toned electric baritone guitar plays legato sustains, palm‑mutes, slides and harmonics, combining authentic 1960s tremolo with a deep, manly twang, while a second guitar carries on into the upper octaves. Completing the rock line‑up are a fat, thumpy, vintage picked bass and a resonant tom‑free drum kit, the latter featuring a massive gran casa‑style bass drum and a generous range of snare performances played with sticks and brushes.

For plaintive songs of the prairie, you have legato ‘oohs’ and ‘ahs’ from an innocent‑sounding solo female country singer and operatic female warbler, some great whistling samples and a male ‘outlaws choir’ whose nonsensical shouted monosyllables sound like a drunken argument in a Mongolian gambling den. The icing on the cake is a superb Jew’s harp and a set of Foley effects comprising howling coyotes, gunshots, crows cawing, horse noises, footsteps and weather effects.

This terrific collection is marred only by a few spots of dodgy tuning and sloppy sample trimming. Conceived as a joke, Spaghetti Western has developed into a piece of seriously entertaining musical fun.