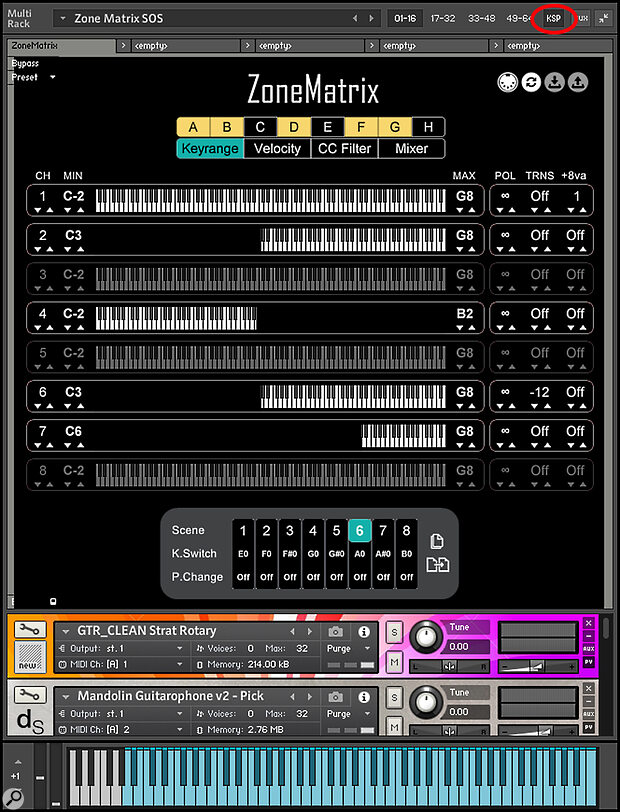 The Key Range tab, showing all eight Zones. The Scene‑changing buttons are always accessible. ZoneMatrix’s GUI takes up a lot of screen space, leaving only a small scrollable area for instruments in the rack. To display all instruments as normal, clicking the KSP button (here circled in red) will show or hide the ZoneMatrix GUI.

ZoneMatrix transforms a single instance of Kontakt into a multi‑instrument performance environment.

Back in those hedonistic pre‑pandemic days when people used to play live, keyboard players increasingly turned to managing multi‑instrument rigs with software — MainStage being the tool of choice for Mac users, or Camelot for PC, Mac and iOS. Any combination of instruments can be addressed simultaneously or separately via key splits, layers, velocity switching and various other means of control, using only a small number of physical keyboards, or even just a single one. With a single gesture the entire soundset and configuration is changed; an entire gig’s worth of complex setups can be chained together and stepped through with a single command.

Whether or not this concept was the inspiration for ZoneMatrix, independent developer Hagai Davidoff realised that such an approach could be developed to run inside Kontakt as a ‘plug‑in’ KSP script to control multiple Kontakt instruments in a similar way.

Installation is straightforward; from the downloaded ZIP file, drag the ZoneMatrix .nkp file and the ZoneMatrix folder to the specified locations on your system drive. These locations are described clearly in the user manual. ZoneMatrix now appears as a user preset in the list of KSP scripts. Click and it loads — that’s all there is to it.

Unusually, no PDF manual is supplied with the download, and no instructions on how to obtain one; there’s only a link to the online version. However, from there you can select ‘print’ from the manual’s toolbar and it automatically downloads as a PDF. Unconventional, but good to know.

The ZoneMatrix GUI is fairly large, taking up most of the screen in Kontakt (shown above). Consequently, the loaded instruments are relegated to a small, scrollable area at the bottom of the screen. Obviously this makes interaction with an instrument’s controls tricky. However, you can show or hide ZoneMatrix’s GUI by clicking on the KSP button at the top of Kontakt’s Multi Rack, giving full‑screen space back to the instruments.

ZoneMatrix can be applied only once per instance of Kontakt. This provides eight Scenes (configurations), with access to 16 MIDI channels’ worth of Kontakt instruments. A Scene consists of eight Zones, each having its own set of conditions (key range, velocity range, etc) and each sending your keyboard performance to the relevant MIDI channels of your loaded instruments.

This concept of treating Kontakt as a multi‑layered super‑instrument is very seductive.

The Zones are represented by eight keyboard graphics spanning the full range from C2 to G8. Dimmed Zones (Twilight — see what I did there?) are inactive, bright Zones are active. This is reflected in the boxes A ‑ H, where Zones are activated/deactivated. Yellow equals active, dark equals inactive. Simple. There are five parameters per Zone: MIDI channel, key range, polyphony (1 — 127 or unlimited), transpose in semitones (up to +/‑ five octaves) and the intriguingly labelled +8va. This last one is especially interesting, allowing up to three additional octaves to be generated above the notes played. For example, by setting its value to 1 you can create a faux 12‑string guitar from an ordinary six‑string guitar patch. 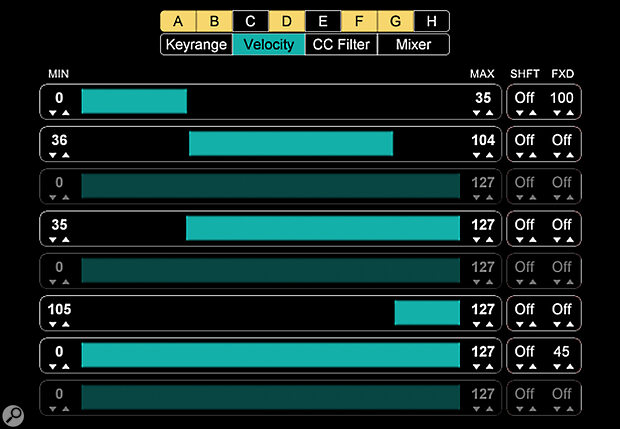 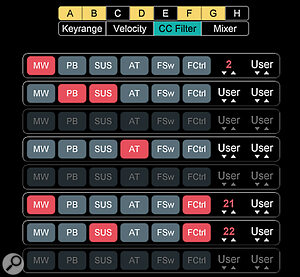 The CC Filter tab, where CC reception of six common controllers can be blocked. Each Zone can optionally be made responsive to two additional CCs of your choice.The CC Filter tab is where you decide which CC controllers affect which instruments. CCs can be filtered by six common types: Mod wheel, pitch‑bend, sustain, aftertouch, footswitch and continuous foot controller. Two additional slots are provided to specify your own CCs for each Zone. To disable reception for any of the six common types, click on its box to turn it red.

The Mixer tab allows different volume and pan settings for each Scene — both Volume and Pan controls can be assigned MIDI CCs. On the surface, this might seem a tad redundant, since Kontakt’s instruments respond by default to CC7 and CC10 anyway, so if you send CC7 or CC10 from your controller, all active Zones will respond in unison, disregarding any ZoneMatrix Mixer settings. If you want independent control over each Zone’s level or pan you’ll need to use a unique set of CCs to control ZoneMatrix’s Mixer. One useful feature here is that you can name each Mixer ‘channel strip’ via a pop‑up qwerty keyboard — each Scene can be given its own specific set of names. 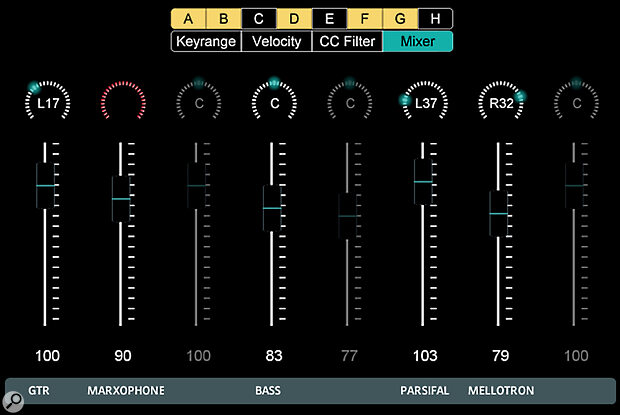 The Mixer tab controls volume and pan for each Zone; these can be assigned CC controllers for real‑time adjustments. Zone 2’s Pan control is just about to MIDI learn a CC, hence the red colour.

A scenario comes to mind where ZoneMatrix will prove indispensable. Most multi‑articulation libraries use keyswitching to select articulations, whilst some present articulations only as individual patches, necessitating having each one on a separate track and MIDI channel. ZoneMatrix allows you to work in the ‘traditional’ way, where eight articulations can be selected from a single track using ZoneMatrix’s own keyswitchable Scene changes. A word to the wise, though; when using any instruments that have keyswitches themselves, be sure to assign ZoneMatrix’s keyswitches well out of the way in their own range, otherwise the conflict of interests will cause mayhem!

This concept of treating Kontakt as a multi‑layered super‑instrument is very seductive. The approach is not dissimilar to Omnisphere, but with an effectively limitless supply of raw material to play with, not only from commercially produced libraries, but also the vast amount of free instruments available out there, not to mention one’s own home‑grown samples. Couple this with Kontakt’s impressive arsenal of effects, and it can be said that the only limiting factor is your imagination.

ZoneMatrix offers the added bonus of not being restricted to Kontakt instruments: any virtual or hardware instrument can be included in the fun if Kontakt is running within a DAW. To do this, Kontakt must be able to resend incoming note and CC data to the outside world; this is enabled in Kontakt’s Engine Options settings. So if, for example, you want to assign a virtual synth to Zone 5 on MIDI channel 5, you add a new, empty instrument to the Kontakt rack and set it to receive on channel 5. It makes no sound, but still sends incoming data out on that channel. Now set your virtual synth to receive on channel 5, enable MIDI Echo (or arm record in Cubase and other DAWs) on the synth track and also on Kontakt’s track, and you’re good to go. The synth now responds to — and can record — whatever data is sent by Zone 5.

Orange Tree’s Mind Control KSP plug‑in, released around 2010, offers similar control of multiple Kontakt instruments utilising Kontakt’s Instrument Bank to load the required instruments. However, Instrument Banks suffer from a disadvantage when using modern, feature‑rich libraries. Although the variety of ‘triggering conditions’ offered by Mind Control is broader than ZoneMatrix, with slots for up to 128 instruments, none can display their performance views, which limits you to using very simple instruments that don’t require graphical interaction. There’s also none of the graphical information that makes ZoneMatrix so easy to use, so you’re very much reliant on having to remember what does what. Whilst Mind Control was revolutionary 11 years ago, it’s a reminder of just how far things have advanced in that time.

Well designed and easy to use, ZoneMatrix transforms Kontakt into a unified multi‑instrument able to layer instruments, assign splits and velocity switch between layers; it can also accommodate other hardware and virtual instruments when used within a DAW.