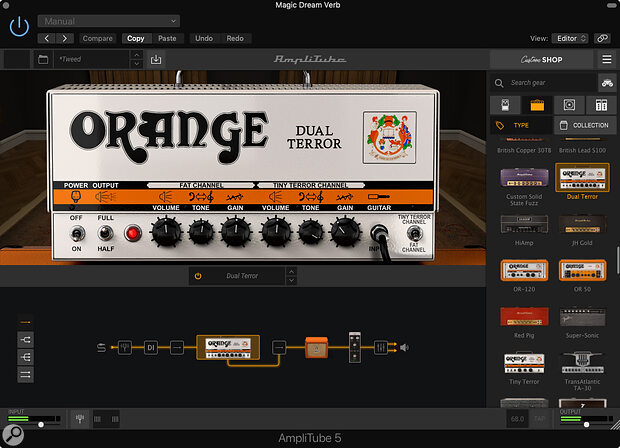 We check out IK’s latest refresh of their popular amp and effects modelling suite.

It is hard to believe that IK’s AmpliTube has been with us for almost two decades. When released, it was one of the first guitar/bass amp and effects‑modelling plug‑ins that aimed to emulate the entire recording chain. Of course, AmpliTube has evolved considerably since then, to take advantage of better algorithms and increases in computing power and to add more models and functionality. The most recent version, announced at the end of 2020, is AmpliTube 5, and I was very keen to find out what more it had to offer.

In With The New

As with previous versions, AmpliTube 5 can be used as a standalone desktop app or as a plug‑in. There’s also an iOS version in the pipeline. There are more models here than before, and users of the flagship Max version now have access to over 400 modelled pieces of gear: in addition to the studio rack gear, much of which is derived from IK’s T‑RackS 5 mastering software but optimised for guitar, there are two new pedals, five new amps, 19 new effects racks and two new room emulations. The range of presets, which are arranged by genre, is also huge and varied. (I was mildly disappointed to find no category specifically for ambient sounds but there are plenty of tools there to roll your own.)

Existing AmpliTube users will notice that the whole look has been refreshed too, with a revamped GUI sporting more realistic gear icons and panels, a searchable graphical gear browser, and a new‑look routing section. Presets can be added to a Favourites menu, for rapid access, and legacy presets from v4 can also be used (though note that the improvements to the models may make them sound slightly different).

AmpliTube 5 supports all the common Mac/Windows formats for DAW plug‑ins, and there are four versions at differing prices. At the top of the range is the all‑you‑can‑eat AmpliTube 5 MAX, which offers full access to all current official artist and brand packs and the full range of gear models. The free AmpliTube 5 Custom Shop enables users to dip a toe in the water. Users of any non‑Max version can audition and purchase add‑ons from IK’s revamped Custom Shop.

The standalone version of AmpliTube 5 is in most respects the same as the plug‑in version, except that it also includes a looper that’s capable of two simultaneous loop tracks and unrestricted layering, plus a simple but very practical eight‑track DAW. The standalone version also features a high‑visibility presets selection system making it very friendly for live performance. IK’s Stomp I/O interface/controller is the neatest option for controlling the looper and the other live functions, but other MIDI controllers may also do the job.

New stomp models include AmpLess, which is inspired by the Tech21 SansAmp, and VariDiode+, which is based on MXR’s Distortion+ but has interchangeable diode types. The new amps emulate models by PRS, Friedman, Bognor, Diezel and Aguiler, while 13 of the rack effects are from T‑Racks. Others include cassette tape emulation, FM modulation, formant and phaser filters and auto‑panning. The new rooms are Subway and Bathroom. All the legacy gear benefits not only from refreshed graphics but also a newly optimised gain structure and,...