Fluid Audio may not be a familiar name, but the man behind it has a rich history in speaker design. We check out their affordable new coaxial monitors.

Coaxial speakers are a bit like buses — you don’t see one for ages then three come along at once. Recently we’ve looked at coaxial designs by Equator and PreSonus, but Fluid Audio’s name is a less familiar one. Company founder and musician Kevin Zuccaro actually has a solid provenance in audio, starting his career in loudspeaker engineering with JBL almost a quarter of a century ago, before moving on to Cerwin Vega and then to M–Audio, where he was instrumental in developing their studio monitor range. He ended up running Avid’s monitoring division before setting up Fluid Audio in 2008.

Every monitor designer will tell you that the big challenge is juggling the necessary engineering and price compromises to produce the best possible product within a given price range, as the supporting physics and technical challenges of loudspeaker design are already well established. Kevin’s approach is to try to optimise each element in the system, taking cost into consideration, and then to spend time voicing the finished design to his satisfaction. Indeed, it is the voicing of the FX8 that gives it a quite distinctive character.

The FX8 is not an expensive speaker, and as with so many things these days, it is built in China to achieve its low price. This two–way, active design houses 130W of Class–AB power feeding an eight–inch woofer (80W) and a 1.2–inch dome tweeter (50W), crossing over at 2.4kHz. The woofer is built around a composite paper cone while the tweeter, which is mounted in a conical waveguide in the centre of the woofer, is doped silk. Around the woofer is a shaped baffle insert that also sports a power LED and a level control. It also includes a smooth aperture for the slot–shaped port and allows the woofer a smooth transition to the baffle. 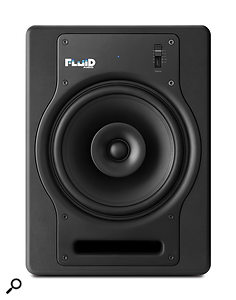 Coaxial speaker designs offer the benefit of near point–source imaging, which promises a more consistent sound when the listener moves off axis. Front porting has the advantage that it doesn’t compromise the speaker performance when located close to a wall, though careful design is needed to minimise port noise due to air movement. Magnetic shielding is also included in this model, though this may be less of a concern now that virtually everyone uses flat-screen monitors.

For connectivity there’s a choice of quarter–inch TRS balanced jacks or unbalanced RCA phonos, with power coming in on a standard IEC cable. Heatsinks are evident on the rear of the monitors, and are necessary as traditional analogue amplifiers generate more heat than their PWM counterparts, though many purists still prefer the analogue sound. The level control is on the front panel of the speaker cabinet where you can actually reach it, and it is a detented short slider rather than the more common rotary control. Unusually there are no rear–panel EQ adjustments at all.

Other than the moulded baffle insert, there’s nothing radical or fussy about the MDF cabinets, which measure 340 x 254 x 270 mm and are neatly finished in the familiar black–vinyl laminate, with rounded baffle edges. With a specified frequency response of 35Hz to 22kHz, the speakers can produce SPLs in excess of 100dB (A–weighted) at one metre, which is more than adequate for comfortable nearfield monitoring.

Sonically the FX8s remind me of some of the M–Audio models I’ve reviewed in the past, as they have a forward, detailed sound that makes it very easy to separate the instruments in a mix. They also manage to provide a solid but not overblown low end, where the woofers seem to be pretty well damped. There’s a bit more hiss than I expected from the circuitry though, and in a quiet room when playback has stopped you may just hear it from your listening position.

As expected, the stereo imaging is good with plenty of space around the various mix elements, my only minor reservation being that the enhanced sense of detail produced by the FX8s might lead you to believe your mix has greater clarity than it actually has, posing a risk that your music may sound a little recessed when played back on other speaker systems. Clearly, any criticisms — if indeed this is a criticism — have to be made in the light of price, and as I said at the outset, these are not costly speakers. It’s also true that you soon adapt to the voicing of your particular monitors, so as long as you familiarise yourself with their sound by playing back commercial mixes you should be fine.

If you’re after a main pair of monitors and you are working to a restricted budget, you should definitely add the FX8s to your short list for consideration. It’s probably also fair to say that even if you already have some perfectly good monitors, the FX8s might be valuable as a second pair for providing that important second opinion on your work, especially given the way they allow you to hear detail that more conventionally voiced speakers might miss.

At the more affordable end of the market I’d add the Alesis M1A MkIIs, the PreSonus Eris range, the Tannoy Reveals and the Fostex PM series to your audition list.