FMR have improved on their classic designs as they turned them into 500-series bargains!

It seemed only a matter of time before FMR adapted their popular 'Really Nice' processors, the RNC1773 and RNLA7239, to the 500-series format. The new versions offer only a single channel, of course, but circuit and component upgrades deliver enhanced features and performance.

FMR's approach to dynamics processing has always been to substitute software and digits for side-chain electronics whilst keeping the audio path entirely in the analogue domain. There's no change in approach, but a new processor that's forty times faster than in the originals has allowed FMR to use higher-resolution algorithms and thus to claim improved performance.

Each unit's thick front panel carries three switches, a gain-reduction meter and five anodised knobs, red on the RNC500 and blue on the RNLA500. Sealed switches and relays feature alongside a multi-layer PCB, which should make for good operational reliability. Power and audio I/O are catered for by the host chassis but, as a safety measure, overcurrent protection puts the new units immediately into bypass.

Like its predecessor, the RNC500 is an apparently simple, competitively priced compressor with two operating modes: Normal and SuperNice. In the Normal setting, all you have to do is adjust the parameters for Threshold, Ratio, Attack, Release and make-up Gain until you achieve the effect you want. Operation is as you'd expect, with the compression, especially at shorter release times, becoming more apparent as you bring up the ratio. Gain reduction is displayed as a moving 'dot' on the 10-LED meter. The meter is driven by a control voltage from the same microprocessor and D-A converter combination that determines the amount of gain reduction, so accuracy is guaranteed. A switch above the meter routes the audio into or around the compressor circuitry, via a sealed relay. 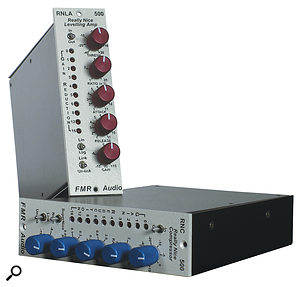 In SuperNice mode, the front-panel controls and meter work as in the Normal mode, but unless you're using crazy compression settings the result is under control, yet noticeably devoid of compression artifacts. It therefore sounds unprocessed. FMR are vague on just how they achieve this, but they admit that three compressors are cascaded together in a way that reduces pumping and breathing. My old Aphex Compellor uses two compressors, one to cover lower-level signals and the other to take care of higher-level transients, to give the impression that no compression is taking place, and I suspect something similar may be happening here.

Lastly, a Link switch connects the side-chain signals of two RNC500s, allowing the unit's detectors to act on the composite signal. With the exception of the Threshold control, where the larger of the two side-chain signals determines the peak gain-reduction on both units, the remaining controls are independent, and would have to be set identically for stereo operation.

The 'LA' in the sister unit, the RNLA500, stands for 'levelling amplifier'. Common in the '50s and '60s, this alternative name for a compressor is now often seen on recreations of devices from that period including those, like the RNLA500, that seek to emulate the non-linearities that gave real character to photocell-based compressors. These older optical compressors often had a seeming reluctance to respond to a signal, because the audio signal had to light up a lamp before the photocell could detect the level overshoot. Coupled with other irregularities in their circuits, these 'levelling amps' could have real character — and that's exactly what the RNLA500 offers.

The only operational difference is that the RNLA500's Normal/SuperNice switch now selects a Lin(ear) or Log(arithmic) release. The linear setting is designed to deliver a more 'optical' feel, whilst the logarithmic setting aims to restore the apparent loss of transient response in the linear setting. The linear setting is a bit of a misnomer, in that the RNLA's VCA already has a logarithmic control law, so the Log setting accelerates that release by just that much more (the amount is linked to the gain reduction). Thus, the RNLA's Attack and Release knobs feature the legendary 'Tufnell Scale' that goes to 11.

In its Normal mode, the RNC500 behaves just like a 'normal' hard-knee compressor: low compression ratio, slower attack times, and longer releases at higher thresholds will give a gentle, subtle compression that hardens up and starts pumping at higher ratios, with a faster attack, a shorter release and lower thresholds. This is where you can get creative or crazy, depending on what you wish to hear. In SuperNice mode, the compression artifacts appear to disappear, unless you really push things. It worked really well when I didn't want compression to be obvious: it could pull together vocals, acoustic instruments, bass, percussion and final mixes in a very transparent, sonically neutral manner. FMR mention in their QuickStart Guide (the manual wasn't ready) that the RNC500 adds a little 'heft' to the bottom end, and it certainly had a nice low-end 'weight'.

The RNLA500 imparts a wonderfully thick-sounding smoothness to the audio signal, and feels less aggressive. FMR's algorithms successfully duplicate the slight delay in optical compressors; with the Lin release engaged it sounds engagingly opto-like. By accelerating the release envelope, the Log mode does seem to restore the transient response losses. For me, the RNLA500's killer application was on drum tracks, where its opto-character and Log release characteristics really came into their own.

Both the RNC500 and RNLA500 are really nice. The SuperNice mode is the RNC500's trump card, giving you a somewhat unique way of compressing in a nearly inaudible and transparent manner that is especially effective with more sonically delicate sources. The ace up the RNLA500's sleeve is that it has real character, sounding very close to an optical levelling amplifier from days of old — it could well be thought of as an effect unit, rather than simply a compressor.

Given their capabilities, their high level of performance and the competitive price, I'd say that the RNC500 and RNLA500 would be really nice additions to any studio's 500-series rack. If you're getting into the format for the first time, or just thinking of adding a new compressor or two to your arsenal, you ought to be considering both of these — even if they leave you with cash to spare! Bob Thomas