What secrets have Elysia hidden inside this modest‑looking rackmount case?

Elysia manufacture a range of very high‑quality, stylish and powerful compressors and equalisers, but their designs don't follow the well‑established norms; instead they introduce new facilities, new ways of working and, as a result, new techniques and sounds! A recent addition to their outboard line (they also offer some software) is the Xfilter, which is available in both 1U rackmount and double‑width 500‑series module formats, each styled to match other Elysia products. The Xfilter provides a stereo, five‑band equaliser with an unusual, flexible and powerful feature set, and the design borrows, in part, from the company's range‑topping Museq equaliser, using the same class‑A circuit topology and carefully selected, tolerance‑matched, passive components to ensure precise and stable stereo imaging.

Four of the five bands are governed by 41‑detent rotary gain and frequency controls, which operate both channels simultaneously — this is very much a stereo unit, rather than a dual‑mono one. Six black push‑buttons in the centre configure the various operating modes, and all have status LEDs. The left‑most button labelled 'Hit It!' activates the entire EQ (yellow LED on), and provides a hard‑wired relay bypass when deactivated.

Straightforward high‑ and low‑shelf sections, with a ±16dB gain swing, take care of the top and bottom of the audio spectrum. Usefully, these can be switched individually into high‑ and low‑pass filters via two of the black buttons. This being an Elysia design, however, these are no ordinary filters! The slopes increase dramatically with increasing gain, becoming resonant at the higher gain settings, with a substantial 8dB peak around the turnover frequency. The low‑shelf frequency control spans 20‑900 Hz, and the HF shelf offers 0.7‑28 kHz.

The two mid‑band equaliser sections are completely conventional, but are equipped with independently switchable wide/narrow bandwidth options via two more of the black buttons. No bandwidth specifications are provided in the brief manual, although the bandwidth options appear identical for both bands, and I would estimate they amount to about 2.5 octaves in wide mode and 1.2 octaves in the narrow configuration at the maximum gain settings. (Equivalent to Q values of 0.5 and 1.1, respectively). The mid‑band sections produce non‑constant‑Q symmetrical curves, which is the most common arrangement for this kind of product. The gain controls provide a range of ±13dB and the frequency ranges overlap nicely, with 45Hz to 2.2kHz on the lower‑mid and 300Hz to 16kHz for the upper‑mid.

A fifth and final equaliser band has no controls other than a black button labelled 'Passive Massage' to switch it in (LED on) or out. This is an entirely passive low‑pass filter stage, constructed from a shielded inductor (L) and capacitor (C) network, to provide a second‑order (12dB/octave) response with a modest 2.5dB resonant peak at 12kHz, before rolling off from around 17kHz. This passive filter stage introduces a hefty phase rotation above about 5kHz, which exceeds ‑180 degrees at 25kHz, but it adds a certain classy 'sheen' and air to the high end, and is surprisingly effective at reducing harshness (the kind of thing caused by low‑level digital aliasing artifacts).

The Xfilter's rear panel is symmetrical, with an IEC mains inlet in the centre and the audio connections to either side. The IEC socket has an integral on‑off switch and fuse‑holder, and a separate slide‑switch configures the unit for 115 or 230 V AC mains supplies. The Xfilter consumes around 8 Watts. Balanced audio inputs and outputs are catered for with both XLR and TRS connectors, and each channel has an additional TRS output connector, labelled 'Ext'. The outputs are impedance‑balanced, so only the 'hot' side is actively driven with a full amplitude signal,

This Audio Precision plot shows the phase response of the EQ with the 'Passive Massage' filter switched out (red) and switched in (purple). As you can see, normal operation shows a conventional and modest phase shift with frequency, while switching in the LC filter creates substantial phase rotation above 2kHz, flipping past 180 degrees at about 25kHz.maintaining full compatibility with balanced and unbalanced equipment and, specifically, unbalanced insert points.

This Audio Precision plot compares the second (red) and third (green) harmonic distortion contributions against frequency, with the total harmonic distortion result (black). As you can see, third harmonic distortion components dominate above 2kHz and second harmonic below 500Hz.Internal construction is very neat and elegant, with a full‑width circuit board across the rear of the unit carrying the I/O connectivity and a linear mains power supply, all built with standard components. A small toroidal transformer is mounted in the centre of the case floor, and the mains safety earth is taken directly from the IEC socket to the case metalwork.

The audio circuitry is housed on two separate boards, one for the LF shelf and lower‑mid equaliser sections, and the other carrying the high shelf and high‑mid sections. Both are four‑layer boards with a full ground plane, and constructed largely with surface‑mount devices (SMDs), including MELF resistors and Burr‑Brown OPA 2134 high‑performance op amps. Conventional WIMA MKP4 metalised polypropylene capacitors are employed in the equaliser circuits, and the control potentiometers are either dual‑layer (for gain functions) or quad‑layer (for frequency control). Cleverly, these two audio boards are designed to fit directly into a 500‑series module frame, and have the appropriate edge connectors in place (although bypassed in the rackmount version, via linking connectors to the rear PCB) — hence the availability of the Xfilter in the 500‑series format, with identical functionality and performance. A fourth PCB is mounted on the front panel and houses the push buttons and illumination for the Elysia name badge.

An oscilloscope display of a 1kHz sine wave at +22dBu, revealing asymmetrical clipping where the positive half of the cycle clips before the negative half.My bench test measurements proved identical to the published specifications, with a noise floor of ‑98dBu (A‑weighted) and THD+N of +4dBu at 0.0017 percent, rising to 0.09 percent at the maximum input level of +21dBu. Third harmonics dominate above 2kHz, and second harmonics below 500Hz, but both at low levels. The frequency response is flat to far above the capabilities of my Audio Precision test set, and Elysia claim ‑3dB points at 400kHz. The bottom end reaches ‑3dB at around 10Hz. The maximum output level is +21dBu, the same as the input, although the circuitry clips slightly asymmetrically with the negative side flattening roughly a decibel higher than the positive side. The total dynamic range capability is a very healthy 119.3dB.

The Xfilter sounds very transparent and clean, with crisp transients and a solid bottom end. The four primary equalisation sections all work much as expected, with usefully overlapping ranges to ensure every part of the spectrum can be reached, and generous boost/cut gains. The ability to convert the shelf sections into filters is not new, but the option to create a resonant peak with the steeper settings brings about some very useful flexibility in shaping sounds, especially at the low end. For example, kick drums can be given some extra weight without dragging up subsonic rubbish or muddying the lower‑mid. Elysia describe this tool as a 'secret weapon' and I can see what they mean; the classic Pultec EQ does something similar and it's a very handy facility. 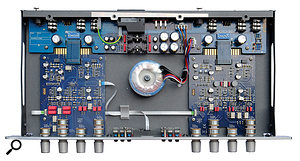 A shot of the box innards. You can see the 500‑series edge connectors on the two audio boards, the red WIMA capacitors, and the chunky surface-mount MELF resistors with their colourful marking bands. The right-hand audio board carries the two small inductors in screening cans near the middle of the board (marked 273). I found the wide and narrow bandwidth options for the two mid‑sections to be well chosen, the former offering gentle tonal shaping and the latter leaning more towards sculpting. This isn't a particularly 'surgical' EQ, but the narrow mode does make it possible to find and control unwanted resonances or pull up some specific spectral detail without too much difficulty. The operational controls are very straightforward, all work very well, and the detents provide a comforting impression of quality and precision. I found the length of the knobs tended to obscure the control parameter markings around the bottom, but it wasn't a problem in practice since settings are generally arrived at by ear anyway. The passive low‑cut 'massage' filter is subtle but surprisingly effective, and it will definitely appeal to digital phobics, and I found the top‑end sheen it bestows to be quite addictive.

Overall, this is a very nicely designed and well‑made stereo equaliser, with some unusual but very practical and musical EQ options. It is a powerful tool for mix‑bus shaping and home mastering, but also serves as a versatile source equaliser, despite the fact that it is not possible to operate the two channels independently. This last point may put some people off choosing the Xfilter as a general-purpose EQ, but its superb sound quality, unusual facilities, and ease of use will appeal to many. I liked using it a great deal.

The DAV Electronics BG3 Decca‑inspired design, Tonelux's Equalux and JDK's R24 all offer broadly similar four‑band EQ facilities for similar prices. All of these units can be used on dual‑mono as well as stereo sources, but they all lack the Xfilter's passive low‑pass filter and intriguing quirkiness.