If you like the bright sound of beryllium tweeters, these active monitors might make for a pleasant departure from the usual suspects.

Twin-woofer speakers seem to be getting more popular but, unlike D'Appolito designs, where a central tweeter is flanked by two identical woofer/mid-range drivers, the Focal Twin takes a different approach, which is also used by ADAM in some of their monitors. In the Twin 6, one of the cone drivers handles both bass and mid-range while the other handles only the bass, making this a three-way design. The Twin 6 is active and designed for professional nearfield or midfield applications. The three internal amplifiers deliver 150 Watts into each of the Focal 6W4370B cone drivers and 100 Watts into the tweeter, making a massive 400 Watts in total. The technical information provided by Focal states that the two larger amplifiers are based on 'BASH' technology — which I assume doesn't mean you have to hit them to get them started! Though driven differently, the two 6.5-inch drivers are identical, and are based on a 'W' cone sandwich composite material, in a soft-roll rubber suspension. The design is magnetically shielded by the use of cancelling magnets, so the speakers can be used relatively close to CRT monitors without causing picture problems. The drivers and amplifiers share the same acoustic space and there seems to be very little damping material inside the cabinet.

Bass loading is via two low-turbulence ports at the sides of the baffle, and a centrally placed Focal TB871 inverted-dome beryllium tweeter handles the high end. Beryllium is now designated a hazardous material, so specific documentation relating to its shipping and disposal is included in the manual. By restricting the mid-range to only one of the two drivers, the phase problems that can occur when reproducing the same signal from two drivers are reduced except at very low frequencies. The long wavelengths involved at the low end mean that routing the bass to both drivers to double up on power handling causes no significant phase issues.

As with other speakers of this type, the Twin 6 is designed to be used horizontally, which can be an advantage when mounted on a meter bridge. Though they are relatively compact, at 250 x 500 x 340mm (9.8 x 19.7 x 13.4 inches), and weigh around 14kg each, the frequency range of these speakers covers a more than respectable 40Hz-40kHz, though the lack of information on how many dB down the level is at these points renders these figures less informative than they might otherwise have been. The peak SPL is 115dB, which is not as loud as some midfield monitors, but more than loud enough for sensible monitoring — and almost loud enough to be used as a small PA system!

All the necessary connections and controls are found on the rear panel. The mains inlet (230V or 115V switchable) is a standard IEC connector, with associated switch and power LED. The input is electronically balanced, with a switchable sensitivity of +4dBu or -10dBV. All the electronics are mounted on the metal rear panel, which also doubles as a heat sink. This panel is recessed flush with the rear of the cabinet and held in place by a number of cap-head screws. 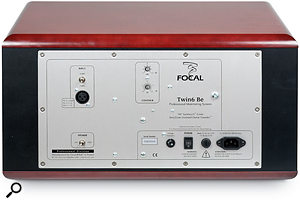 There are more controls on the rear of these speakers than are found on most, including a Speaker left/right switch, which allows you to select which of the drivers handles the low end and which the mids.In addition to the level switch there's also a Speaker (left/right) switch. This enables you to make sure the woofers are driven as a mirrored pair, to ensure symmetry. In essence, it dictates which of the cone drivers handles the bass/mid and which one the bass, so these switches need to be set up in opposite directions for the two speakers. Low- (150Hz) and high-frequency (5kHz) contours are adjustable using slotted potentiometers over the range ±6dB and ±3dB respectively, to compensate for room position and user preference. There are no details of the crossover design in the spec sheet, so I don't know whether these controls directly adjust the feed level to the low- and high-end amplifiers post-crossover, or whether they are separate filters.

On a practical note, though the metal rear panel is flush with the back of the cabinet, the two very small toggle switches used to set the input sensitivity and the left/right status stick out rather a long way. This leaves them extremely vulnerable to damage, and on one of the speakers I received for review, both switch toggles had been pushed right back into the switch housing after the polystyrene packing pieces had cracked and shifted in transit. This type of design flaw is bad enough in speakers that will be set up once and then left, but given that producers often want to buy speakers they can take around with them as a reference, this point would be a major concern for such users. Recessed buttons would have been much more practical. Thankfully, the guys at UK distributors Unity Audio tell me they're considering getting some 'roll-bar' style handles fitted over them to offer the necessary protection.

The cabinet itself is unusually stylish for a studio monitor, with the top and bottom panels veneered in what appears to be some type of highly figured red wood. The rest of the enclosure is finished in black, and the corners are all radiused. Shot-blasted trim rings around the cone drivers give the baffle a very sophisticated look, and both these trim rings and the tweeter are recessed flush with the baffle. The power LED shows just above the Focal logo. Structurally, the cabinet is built from hefty 19mm MDF with internal braces, and because it is fairly compact, there's very little opportunity for the panels to resonate.

Once I'd replaced the damaged switches, the speakers worked fine, and setting them up in place of my usual monitors revealed a well-balanced sound, with smooth, well-extended bass, and exceptionally good mid-range clarity. There's also lots of high-end detail, though to my ears the beryllium tweeters sound a bit 'scratchy' — something I've also noticed with certain other monitors that use titanium tweeters. I know some people like that 'forward' sound but, personally, I find it slightly fatiguing and tend to prefer soft domes or aluminium, which seems to be less 'splashy' sounding than harder metals.

Providing you like more of an 'in your face' sound, then the Focal Twin 6s actually work really well, presenting plenty of detail, with excellent vocal reproduction and a believable tonal balance across (and, in fact, beyond) the full music spectrum. As you'd expect from their power specs, they can also play pretty loud if you want them to, with plenty of headroom in the amplifiers to accommodate peaks.

These speakers are suitable for both nearfield and midfield applications, in both project and professional studios. Though the tweeters don't entirely suit my personal tastes, don't let this put you off: I find quite a few other very popular studio monitors too bright-sounding. As studio speakers go, not only are the Focal Twin 6s far more attractively finished than most, but they exhibit strong stereo imaging as well as a well-extended, natural-sounding bass that doesn't seem hyped up or overly plummy. Mechanically, they are really well made, apart from those silly switches. The Focal Twin 6s are definitely worth auditioning if you fancy a change from the usual suspects in this price range.

There are a number of good mid- and nearfield monitor speakers in this price range. If you are looking at the Twin 6s, you might want to consider models such as the ADAM S3A, Genelec 1030A, JBL LSR6328P, Dynaudio BM15A, M-Audio EX66, ATC SCM20A or Mackie HR824.

Though at the higher end of the price range associated with private project studios, the Focal Twin 6s deliver a full-spectrum sound without trying to hype it up, and they still sound good at relatively high listening levels.