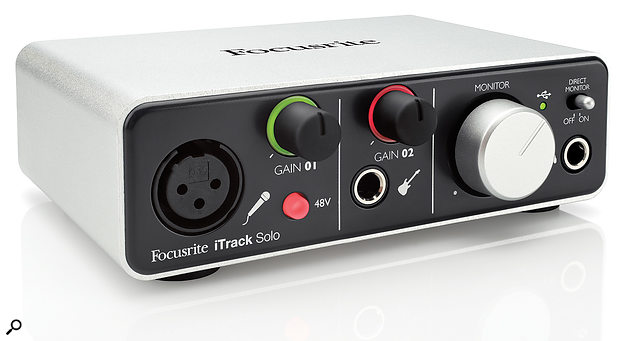 Focusrite have developed quite a reputation for audio interfaces, and the iTrack Solo is their first one designed for use with iOS devices, although it can also be used with a computer via its USB 2 connection. The iTrack Solo incorporates 24-bit converters, but is limited to 16-bit operation when used with an iPad. For connection to an iPad, a short adaptor cable is included, and this connects to the Device Link port on the rear of the iTrack Solo. The features offered here are more like those found on smaller home-studio audio interfaces than on consumer iPod products, so you get a headphone output, a stereo line output on RCA phonos, and a sensibly large volume control. There's also a switch for direct monitoring, which allows the input signal to be heard direct, mixed with the DAW output. Input one is a dedicated mic channel with input gain trim and switchable phantom power. Input two is for instruments or line sources and has a quarter-inch unbalanced jack connection, again with a gain trim control. When the iTrack Solo is used with a computer, a green LED on the front panel shows that a USB connection has been established with the host, from which the iTrack also draws its power. When used with an iPad, the iTrack must be powered via its USB input, using a USB charger type of device, which you have to supply yourself. Fortunately, most Apple iOS devices come with one. No additional software is necessary to use the interface with Mac OS or iOS devices (PC Windows drivers can be downloaded from Focusrite).

The designers have built a neat level indicator into the front panel, in the form of an LED ring around each gain trim knob. When the signal is too low, the LED ring is off, but when a signal is detected it lights in green, changing to amber at close to the maximum level. Flashes of red indicate a clip. My tests were done using an iPad 3 and Beyerdynamic DT770 Headphones. There was plenty of headphone level and the phantom power worked fine with my LD 1011 back-electret mic.

When used with GarageBand or similar DAW software, the mic input feeds channel one and the jack input channel two. The sound quality seems pretty clean and transparent; certainly good enough for serious demo work. However, I found the iTrack came unstuck when I wanted to try some guitar-amp modelling software, as the jack input is on channel two but the guitar-amp software expected to see an input on channel one. The amp software had no way to switch inputs and the iTrack had no way to switch outputs, so I simply couldn't use it in that instance.

Overall, the iTrack works perfectly well as long as you accept the above-mentioned limitation. I feel happier that it connects via a cable rather than, as some devices do, by plugging directly into your iPad, leaving heavy XLR and jack cables placing unnecessary strain on the connector. Having to find a source of USB power is mildly irritating, but is a small price to pay for a decent interface, and the iTrack Solo is currently one of the more serious two-channel interface offerings for iOS.