Focusrite expand their affordable Platinum range with a channel strip, featuring an optical compressor and EQ that can be optimised for vocal or instrument usage.

The Focusrite Trak Master is the latest in the company's successful, lower‑cost Platinum series and is an all‑analogue channel strip with the option of adding a plug‑in 24‑bit/96kHz stereo digital output converter module (at around half the cost of the Trak Master itself). It is similar in concept to the original Platinum Voice Master, but has fewer stages, comprising a discrete Class‑A mic preamp with balanced line and unbalanced instrument (high‑impedance) input options, an optical compressor stage and a three‑band equaliser with switchable voice/instrument characteristics. Focusrite have made several improvements in their optical compressor design of late and these are included here, resulting in a faster response and more musical distortion characteristics. The styling follows that of earlier Platinum units, including the tear drop‑shaped buttons, some of which feature internal illumination.

The Line Input and two Line Outputs (at +4dBu and ‑10dBV respectively) are round the back. The ADC Ext Input allows access to the second channel of the optional stereo A‑D converter board.The rear of the 1U rack case provides a balanced line input on a TRS jack operating at a nominal +4dBu, but the unit can also accept unbalanced ‑10dBV sources without the need for switching. Two separate output jacks provide balanced +4dBu and unbalanced ‑10dBV options which may be used simultaneously if required, as might be the case when setting up direct monitoring to avoid latency problems when overdubbing. A blanking panel covers the digital converter slot, though no converter module was available at the time of review. An additional ADC Ext Input jack allows an external line‑level signal to be fed via the otherwise unused channel of the stereo converter when fitted. 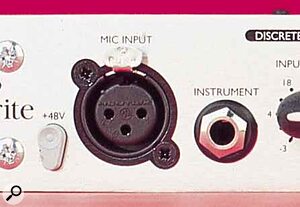 The front panel of the Trak Master carries Mic Input and Instrument sockets.The Mic Input XLR and unbalanced Instrument jack are on the front panel within the preamp section. Switchable 48V phantom power is available, along with mic/line switching — the Instrument input is available for use when the Line input switch is disengaged, and plugging in an instrument jack overrides the Mic Input. Up to 57dB of input gain is available at the preamp stage, with a simple two‑LED metering system for signal present (green) and overload (red). A switchable low‑cut filter attenuates low frequencies below 80Hz.

Moving to the compressor section, this uses the latest Focusrite opto‑compressor technology which has quite a different compression curve to VCA compressors. The published compression curve shows both the hard‑ and soft‑knee characteristics. In both cases, the compression ratio decreases slightly once the input signal reaches more than around 5dB above the threshold level, which helps avoid that 'choked' sound that some compressors produce. This is a characteristic of vintage optical compressors, though most were very slow by comparison with this new design.

The Trak Master's compressor is an optical design, with both hard‑ and soft‑knee modes, and it can act either before or after the internal equaliser.

Rather than furnish adjustable parameters for every possible function, the compressor can be switched between soft‑knee and hard‑knee operation using the Tight button, which also switches the compression ratio from a fixed 3:1 in soft‑knee mode to 6:1 in hard‑knee mode. Attack can be set to two values using the Punch button; when Punch is active, the compressor attack is slowed slightly to allow more of the natural attack of the signal to come through before the onset of compression. Release is fully variable, as is the threshold level at which compression takes place, the latter via the Compression control, which is helpfully calibrated with Less at one end of the scale and More at the other. A six‑LED meter shows the gain reduction being applied, up to a maximum of 20dB, and a Make‑up gain control can be used to restore any level lost due to compression. The compressor may be switched pre or post the EQ section and can be bypassed using the Comp In button. Finally, a Tube Sound control uses solid state circuitry to emulate the harmonic distortion of a typical tube circuit, allowing the user to add as much 'warmth' as desired.

As with the compressor, the EQ section has been simplified to make it easier to set up, but it still offers plenty of scope for tonal correction. Instead of being a traditional three‑band parametric EQ, the treble and bass stages have been optimised for instrument or vocal use, with independent Inst/Vocal switching, while the third control is for Presence rather than mid‑range, operating at 1.5kHz with a +12dB/‑15dB gain range. Interestingly (and appropriately) the presence bandwidth is much narrower in cut mode than in boost. The bass control has a +12dB/‑14dB range and is sweepable from 25Hz to 400Hz where the Inst/Vocal switch changes the filter response from shelving to bandpass. At the treble end, the Vocal/Inst switch sets the EQ shelving frequency to 3.3kHz for instrument use or 10kHz for vocal use with a ±14dB gain range. A single button bypasses all three EQ stages when not in use.

The Trak Master's three‑band equaliser can be switched to deal with the different demands of vocal and instrumental recording.

That leaves only the output stage, where a seven‑section LED meter monitors the signal level after the output Fader knob — up to 6dB of additional gain may be applied. The Power switch also resides in this section as does an ADC Lock LED, which shows that the optional converter is locking properly to an external word‑clock source. A flashing ADC Lock LED indicates an unsuccessful lock, usually due to excessive source jitter, inappropriate cables or a level mismatch.

I checked out the Trak Master with both voice and electric guitar and was pleasantly surprised by how well the switchable EQ parameters adapted the EQ characteristics to the respective sound sources. For example, in Vocal mode, the treble control imparts a nice airiness to the sound without otherwise affecting the fundamental tonal balance, whereas in instrument mode it falls neatly onto the 'jangle' spectrum of electric or electro‑acoustic guitars. Similarly, the bass control has enough range to emphasise any weak bass or low‑mid frequencies, and in Instrument mode bass boost also creates a slight dip higher up the spectrum to prevent the boost from encroaching into the mid‑range. Vocal sounds can be reshaped quite significantly without the effect seeming overdone, which is the hallmark of a properly designed equaliser. Presence also works well, provided that it is used in moderation, but adding too much boost can make vocals sound over‑aggressive. Overall, the EQ offers plenty of flexibility while remaining fairly easy for less experienced users to manage.

The compressor also turns in excellent results on both vocals and instruments and, used aggressively, it sounds particularly nice on rhythm/picked guitar and bass guitar. It has a nice 'obviously compressed but musically pleasant' pumping quality when applied heavily, but drop back the gain reduction to a more sensible setting and you get gain levelling without obvious artefacts, especially in the soft‑knee mode. The effect of the tube drive emulation is extremely subtle, as it should be, and is more evident on instruments than on voices. It adds a little throaty thickness to the sound and seems to open out the high end slightly, but you need to compare the extreme settings to notice it's doing anything at all in many cases. If you have already tried a Focusrite Penta, the tube emulation is exactly the same.

Having the ability to switch the compressor pre‑ or post‑EQ is very welcome and can produce a quite different result, especially where a lot of EQ is being used. In most cases, leaving the compressor pre‑EQ will produce the most predictable results, but experiment with the alternative, especially when recording instruments, as it can produce some interesting and musically useful results.

Though the spec sheet is modest in its claims for noise, the Trak Master is actually very quiet at all gain settings and its extremely wide 200kHz‑plus frequency response (analogue outs only, of course) gives it an open, airy quality. I would like to have tried the digital output, but sadly that wasn't available in time for this review. However, as it is almost certainly based on the circuitry used in existing Focusrite products (and identical to the card being made available for the Penta), I have no reason to doubt that it will work as intended.

The few corners that have been cut to keep the cost of the Trak Master down to an affordable level don't compromise its audio performance and don't impinge too seriously on other aspects of its use. The most significant economy is probably the replacement of a proper input level meter by a two‑LED 'enough/too much' indicator. Also, only the bypass switches are illuminated, so you have to be careful to check your switch settings.

These points aside, the Trak Master is easy to set up and very sweet sounding, both on vocals and instruments. It makes recording high‑quality vocals easy, but it also sounds brilliant on clean electric guitar or bass. It may not have gates, de‑essers or limiters, but it provides the essentials of clean amplification, musical compression and smooth EQ in a surprisingly affordable, easy‑to‑use package which should be particularly attractive to those many readers who are using soundcard‑based studios or hardware recorders with only line inputs. Fitting the digital output option would be a good strategy for anyone wanting to get high‑quality audio into a budget soundcard that has an S/PDIF input, and though I still feel that 96kHz is irrelevant for 99 percent of all real‑world users, at least it is available if you need it. In summary, the Trak Master is a welcome addition to the Platinum range, and its low UK price and high quality should endear it to a wide range of users.

The optional converter board works at 24‑bit resolution, with 128x oversampling, and can run at 44.1kHz, 48kHz, 88.2kHz or 96kHz, the sample rate being selectable via rear‑panel switches. It has an external word‑clock input on a standard BNC connector and a 24‑bit S/PDIF coaxial (phono) output. There is no 16‑bit option, but most receiving devices are able to either dither or truncate a 24‑bit signal when necessary. The module will automatically sync to an external word clock when one is present, otherwise it generates its own internal clock.

The Focusrite Trak Master is a real breakthrough in quality (both technical and musical) at this price point and deserves to sell by the palette load!