The Foley Grail: The Art Of Performing Sound For Film, Games & Animation

Much of the enjoyment and realism (or hyper-realism) of films, TV shows, radio programmes and computer games relies upon the skilful use of Foley. Named in recognition of the pioneering work in the 1920s of an American, Jack Foley, at the beginning of the Hollywood 'talkie' film revolution, the art and craft of Foley involves creating bespoke sound effects to augment, replace or improve upon any unacceptable original sound, with the aim of making the visual action more believable or more impressive. Foley sounds include the obvious action effects like footsteps and sword clashes, but also all the subtle noises that provide sonic realism, such as clothing rustles and creaks.

Author Venessa Theme Ament is a highly regarded Foley artist with over 25 years in the industry, and this 260-page book (Focal Press, 2nd Edition, ISBN 9780415840859) details her vast experience, along with that of a large number of her named colleagues, with references throughout to relevant examples of Foley in countless major feature films. Given her West Coast training, the industry practices described in the book are mostly based on the Hollywood style of Foley, although different international approaches and contributions to the craft are discussed in passing.

Unlike most of the technical reference books in the Focal Press catalogue, The Foley Grail has a lengthy narrative style which doesn't lend itself to dipping in and out in search of a quick fact or practical tip. Make no mistake, though, the facts and tips are certainly in there, but the author's style demands — or at least encourages — the reader to work through steadily from start to end. 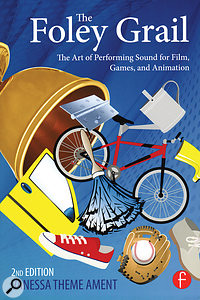 The book is divided into seven sections, most with two or three chapters. The first section details the origins of Foley, the different artistic styles and approaches, and the issues around combining Foley with other sound effects. The next section examines the industry's conventions and protocols, the various jobs and operations involved, and the process of 'spotting' to identify needed Foley effects. The third section is entirely new in this second edition, and explores the rapidly growing use of Foley in computer games and animations, with interesting contributions from Charles Deenen, who advanced game sound dramatically in his role as audio director with Electronic Arts.

Practical Foley techniques are covered in the fourth section: the art of walking footsteps for on-screen actors, using and manipulating props, achieving accurate synchronisation, and more. The final chapter in this section describes a wide range of unusual methods employed for named films to create unique magical or otherworldly sound effects — most crossing over into the world of sound design. The supporting roles, responsibilities and tasks associated with the many other sound team people in a typical Hollywood workflow are discussed in the fifth section. The three chapters here examine the work and interaction of the Foley mixer, Foley editor and re-recording mixer.

The penultimate section covers the design aspects of building a Foley stage, the key requirements and the pitfalls to avoid. It goes on to suggest ways in which a budding Foley artist can develop their prop manipulation skills. Finally, the last section reviews the role of academia in developing new cadres of Foley artists, from the perspective of someone who has worked as an educator in sound production at university level. The last chapter contains the collected wisdom in pithy one-liners from numerous sound-design and Foley artists.

The Foley Grail provides an excellent insight into the often unnoticed world of Foley, and I found it both inspiring and educational. Foley combines highly technical audio skills with artistic creativity and anyone interested in pursuing a career in this remarkable corner of the audio industry must add this book to their birthday or Christmas list. Hugh Robjohns