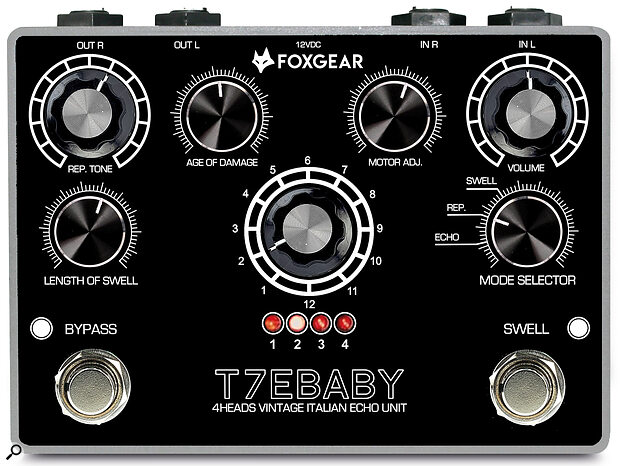 Having already emulated the Echoplex tape delay, Foxgear set their sights on the Binson Echorec.

Unlike most of the early echoes, which used tape loops, the Echorec employed a fixed‑speed rotating drum with a recordable surface surrounded by four playback heads. It had three modes, Echo, Repeat, and Swell. Echo mode had no feedback; in Repeat mode, feedback involved only the selected head or heads; while in Swell mode the feedback was always taken from all four heads.

Foxgear’s interpretation is called the T7E Baby, and it expands upon the feature set of the original, with true stereo operation, variable drum speed and footswitchable Swell. The stereo effect is enhanced using phase and split‑frequency techniques, which produces a convincing sense of width and space. A 9‑12 Volt centre‑negative power supply is required; I used a 12V, 100mA supply with no problems. At around five inches wide, the footprint is fairly small for such a comprehensive pedal.

When the feedback starts to run away, it retains the right kind of analogue saturated character.

A central 12‑way rotary switch dials up the available head permutations, with the active heads indicated by four LEDs. The Mode selector switch accesses the Echo, Repeat and Swell modes while to the left is a control that adjusts the amount of Swell or feedback. The pedal is fitted with dual footswitches (each with a status LED), the left one of which operates a relay hard bypass, with the right bringing in the Swell feedback on demand, regardless of the current mode. On the top row is a tilt‑style Tone control that affects the delayed sound, and an Age Of Damage control that adds random speed imperfections. Motor Adj (speed) varies the delay time to a maximum of 882ms for head four and a minimum of 86ms for head one, adding a little more distortion and just a hint of tape‑style noise at slower speeds. That just leaves the repeats Volume control. 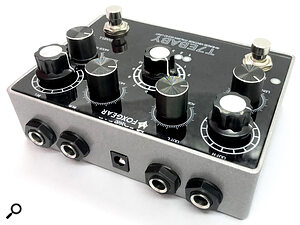 The T7E Baby has dual inputs and outputs and supports true stereo operation.Sonically, the pedal captures the essential sound of the original, and the Age control can be used to bring in an effect ranging from gentle pitch modulation to a more ‘drunken’ effect. The repeats sound clear yet satisfyingly warm, with plenty of variation on offer from the Tone control. Turning Tone slightly clockwise thins out the sound, adding a nice vintage flavour to the repeats when Swell is active. You need to be careful with the Swell control, because when set much further than a quarter of the way up it’s range, you can find it starts to build up and run out of control. Of course this capacity for excess is great when you’re getting hands‑on — just what you want if creating dub‑style effects — and when the feedback starts to run away it retains the right kind of analogue saturated character without breaking up into digital mess.

The Foxgear T7E Baby isn’t the only pedal based on the Echorec and there are also numerous plug‑ins that do a good job too. Nevertheless, it sounds good, it offers plenty of control, it can handle stereo ins and outs, and it is reasonably compact. There’s a lot to like about it.