Have Funky Junk put their secret cache of original dbx ‘Gold Can’ VCAs to good use?

There’s probably no compressor more iconic than the Solid State Logic bus compressor that first appeared in the SL 4000 E-Series console. Its reputation as being the ‘magic glue’ that could pull together any bus mix made it extremely popular in professional circles.

There are now several 500-series devices based on that design, but Funky Junk Industries (FJI) have ploughed their usual individual furrow to bring us their 500-series Solid Compressor 202 Gold Edition (to give it its full title). This limited-edition feedforward stereo bus compressor is designed around a batch of original examples of the long-discontinued, ‘gold can’ Dbx 202C VCA module — and it’s intended to reproduce the characteristics of the E-Series original accurately.

Being stereo, the Solid Compressor occupies two 500-series slots and, unusually, is an open-frame design with shielding on only one side. The black-and-white front panel carries not only the smart VU meter, square bypass switch and control complement of its inspiration, but also some very welcome expansions and additions to the original. 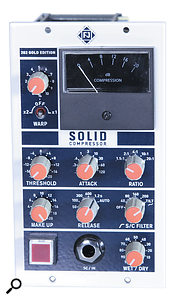 The expansions are in the ranges of the threshold, attack, ratio, release and gain make-up controls. For example, compared with the E-Series, the attack now has nine switch positions instead of six, and a maximum time of 120ms compared with 30ms. The ratio gains 1.5:1 and 20:1 settings, the release a 50ms time, and the threshold and make-up controls are expanded from 15dB swings to 20dB.

The first addition is that of a side-chain filter. Not only can that insert a high-pass filter into the detection signal at 40, 80, 160 or 200 Hz (in order to prevent low frequencies from triggering the compressor) but, higher up the frequency spectrum, the filter’s Tilt position adds an 8dB shelving boost to frequencies above 1kHz, so that higher-frequency transients become more likely to initiate compression. This filter is also active on the front-panel external side-chain input. Another new feature, positioned alongside the side-chain jack, is a wet/dry mix control that makes setting up parallel compression simple and intuitive.

Finally, there’s the linked pair of newcomers, the ‘centre-off’ switch and rotary knob of the Warp control. Acting only on the compressed signal, Warp accentuates the 202 VCA’s third-harmonic distortion, to give between one and 10 percent THD in switch position x1, and 10-20 percent THD in position x2. 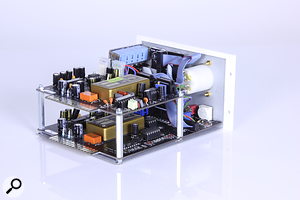 With shielding only on one side of this double-width module, the innards — including those rare ‘Gold Can’ VCAs — are clear for all to see.I’d not previously managed to fit a two-slot unit into a 500-series rack first time, and the Solid Compressor was no exception! But once I had it in place, I particularly liked the fact that, bypassed or active, the VU meter always displayed the amount of compression being calculated by the side-chain detection circuitry. Whether set up to compress subtly, to add punch or to pump savagely, the Solid Compressor delivered exactly what was being asked of it without fuss.

Funky Junk seem to have successfully reproduced the wide-knee characteristic of the E-Series bus compressor’s response curve at low ratios, so that small amounts of low-ratio compression start to occur well below the set threshold. This compression increases in level and ratio as the signal levels rise, and the full compression ratio is reached only when the threshold has been crossed. Combining 2-3dB of compression with a low ratio, an automatic release time and an attack time that preserves the faster transients gives a result that pulls the bus together and that, with a bit of the dry signal mixed back in, can sound extremely natural whilst remaining well controlled. This is where I think the real ‘magic’ lies.

Warp is a quirky function that can be used to add a bit of extra harmonic crunch to suitable sounds, and since Warp only affects the wet signal, Funky Junk suggest that you can use the Solid Compressor as a parallel distortion effect. To be fair, it sounded quite effective when adding a touch of analogue distortion to a DI’d Strat track that was destined for Guitar Rig.

There’s a lot to like about the sound of Funky Junk’s Solid Compressor. Compared with an SSL G-Series plug-in of mine, it feels like it has a bit more life and edge, and this can be accentuated further with judicious use of the Warp control. The vintage Dbx 202C VCAs do give the Solid Compressor its own character, but without an SSL 4000 E-Series I can’t tell you just how this compares with the original.

Personally, I like having outboard and preamps around me that have that a certain something to set them apart from the rest of the herd, and the Solid Compressor is just such a unit. If the idea of a 500-series SSL bus compressor appeals to you — and there are plenty of reasons why it should — Funky Junk Industries’ Solid Compressor 202 Gold Edition is one that you really should audition before you make your final choice. Bob Thomas