Headphones In The Studio

You might think that sound is all that matters when deciding on a pair of headphones — but you’d be wrong! Here are a few less obvious things to consider, along with some recommended buys.

In these days of ‘mastering’ converters, audiophile headphone amps and thousand–pound-dollar sets of headphones, it may come as a surprise to learn that, traditionally, the sonic quality of a pair of studio headphones has been of somewhat secondary importance to a range of other factors. This is still largely the case in ‘pro’ studios, but the situation in home studios can be somewhat different. 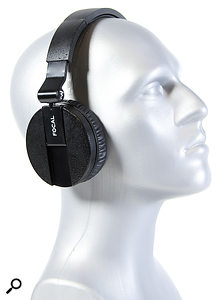 If Graham wanted a pair of headphones for both tracking and mixing, he might opt for these Focal Spirit Professionals.

So what would a recording engineer be looking for in a pair of headphones, if not pristine sound? Well, it’s important to remember that in professional facilities, it’s not usually the engineer who has to wear them — it’s the musicians, and often for many hours at a time! So comfort is a factor, certainly. Then, of course, there’s leakage: it’s no good putting musicians in front of a microphone to capture every subtle nuance of their performance, if our hypothetical musician’s headphones are loudly broadcasting a click track all over your recording! 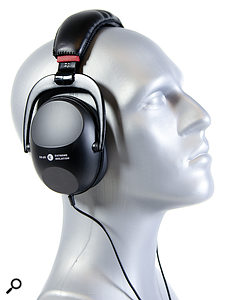 Graham the SOS headphone model, enjoying a pair of Extreme Isolation headphones.Closely related to leakage is isolation — the ability of a pair of cans to stop sound from outside the earcups entering your ears. This is especially important in loud tracking sessions; if, for example, your drummer wants to be able to hear what the DI’d bass is doing, he’s going to want a pair of headphones that block out at least some of the sound from his own kit. In that particular example, he’s also going to want a pair of headphones that are rather loud — and one company who caters specifically to those requirements is Direct Sound. The Extreme Isolation models we reviewed a few months ago (http://sosm.ag/dec14-directsound) offer precisely that, and to such an extent that they don’t need to be playing too loudly to be heard over a drum kit — which bodes well for our hypothetical drummer’s hearing.

We don’t all need industrial–strength hearing protection from our headphones, however — I am told some drummers are in fact capable of playing quietly — and those of us who don’t might prefer slightly less ear protection in favour of a more refined sound. If that sounds like you, then you’re in luck, because there’s an enormous range of closed–back headphones that both sound good and provide a decent amount of isolation. 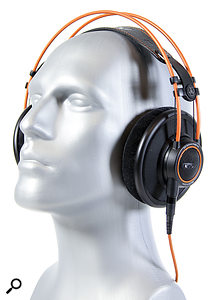 Graham enjoying the cloud–like comfort and refined sound of the AKG K712s.One such, which Sam Inglis identified in his review of the ATH series last year (http://sosm.ag/may14-ath) as offering remarkably good value, is the Audio–Technica ATHM20x. These scored high on both comfort and sound, and compared favourably with much more expensive models.

Then, there’s the Beyerdynamic DT770 Pro — a very comfortable set of headphones that offer a good balance between isolation and sound quality. They’re also available in versions with varying impedances, to suit your existing gear and/or iPods and such.

French monitor boffins Focal entered the headphone fray not too long ago, and their Spirit Professional model received high praise in these pages last year (http://sosm.ag/jan14-focalspirit). They have an impressive level of isolation, lending them well to tracking sessions, and they also sound surprisingly revealing given their closed–back nature. 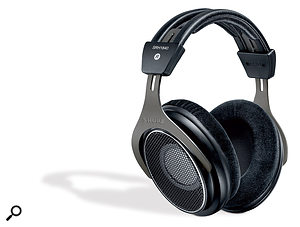 Graham never got a chance to try the Shure SRH1840s, but SOS reviewer Sam Inglis liked them so much he bought a pair himself.Elsewhere in this issue, you can read about Fostex’s new premium headphone design, the TH600. I shan’t recap too much here, but suffice it to say that quality costs!

Finally, there’s the classic Sennheiser HD25 II. This design is distinguished from those hitherto mentioned, in that they are ‘supra–aural’ — they sit on top of, rather than around, the outer ear (the latter are called ‘circum–aural’). It’s a matter of personal preference which to go for, though some find that supra–aural cans can squish the outer ear a little uncomfortably. Others find that circum–aural headphones can keep the ears uncomfortably warm, however, so it’s worth trying both kinds to see which you prefer.

If you’re not in the habit of recording musicians, or are otherwise unconcerned by the prospect of spill, then an open–backed pair of headphones, with their typically more ‘hi–fi’ response (higher frequencies, in particular, are almost invariably better reproduced on such), might be for you. And if you have the money to spend on them, then a pair of Shure SRH1840s would certainly do the trick. When we reviewed them a couple of years ago (http://sosm.ag/jul12-srh1840), we described them as sounding “beautiful”, which is high praise indeed — as is the fact that reviewer Sam Inglis bought a pair and still regularly uses them for mixing.

Another name that springs to mind is that of AKG, who make some excellent open–backed cans at a huge range of prices. Their K612, for example, weighs in at just £149$199, yet it comes surprisingly close in performance terms to AKG’s erstwhile flagship design, the K702. 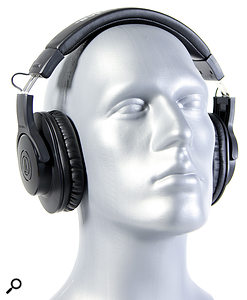 If Graham looks a little pleased with himself, that’s because he’s just bought the excellent–value Audio–Technica ATH M20x.Further up the food chain is the K712 (http://sosm.ag/nov13-akg), which supplanted the K702 a couple of years ago. This is a highly revealing design, with an extremely transparent top end, extended bass, and very low distortion. They are also delightfully comfortable to wear — putting them on is like wearing a cloud. And I don’t mean one of those whispy cirruses either; I’m talking full–on fluffy cumulonimbus, but without the inevitable rainfall.

To stretch this metaphor to breaking point, what the K712 lacks in precipitation, it makes up for in spill. I use K712s for most of my Playback reviewing duties, and while they allow me to scrutinise in pristine detail exactly how awful some people’s reverb choices are, they also allow my poor colleagues to do much the same, but from the other side of the room. Whether that matters to you is your business, of course, but if you like to listen to headphones on public transport as well as in the studio, you’d better hope the person sitting next to you on the bus shares your taste in music.

Finally, as seems to have become the tradition in this column, a ‘Rolls Royce’ suggestion: AKG’s new top–of–the–range model, the K812. They are close to an order of magnitude more expensive than the (still perfectly capable) K612s, and they are every bit as ‘spilly’ as the K712s, but they really do sound impressively detailed, as I found out when I gave them a whirl at the launch event in 2013. I wasn’t able to compare them directly to anything else at the time, but fortunately producer Jack Ruston has since had the chance to do exactly that — and you can read his in–depth review of them in the next issue of Sound On Sound.