Despite the 'real versus sampled' debate continued by Mellotron purists, G-Force's M-Tron Pro VST plug-in has earned a justified reputation as an authentic and effective recreation of that famous tape-replay keyboard. The purists argue that using sampled Mellotron sounds is not an acceptable alternative to the real thing, one primary reason being that many are sourced directly from master tapes, or processed to clean up 'undesirable' yet crucial artifacts that define the 'Tron's true character. In a move to deflect this criticism, Streetly Electronics, the original UK company that made, and still makes and restores, Mellotrons, have teamed up with G-Force to produce The Streetly Tapes Vol 1 expansion pack. 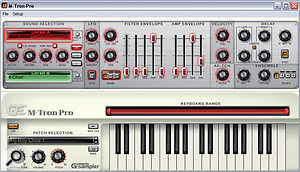 The Streetly Tapes were made exactly the same process involved in making tape frames for production-model Mellotrons. The original IBC studio recordings were first edited to masters, then protection copies made. These were edited to work masters, then finally printed to old EMI tape stock (considered the best on the planet by Streetly's Martin Smith), becoming fifth-generation copies. These recordings were made up into tape frames, then installed into the Skellotron, a benchmark 'exoskeleton' M400 with all its internal workings exposed and accessible, allowing for fine adjustments. It's essentially the perfect 'Tron, with tip-top mechanics and electronics, whose azimuth alignment can be set optimally for every note. As for the recordings themselves, nothing was done to process them or to repair bias pops and drop-outs, just as would be the case with the 'real thing'. The samples were then taken directly from the Skellotron, capturing all its sonic characteristics and behaviour.

The Streetly collection comprises 24 tape banks, featuring classic 'Tron sounds alongside some new additions. Where the Streetly Tapes overlap in content with the original M-Tron library, the differences are quite dramatic. Many of the Streetly versions are significantly clearer and brighter, a result of correct azimuth alignment combined with the particular sonic signature of the M400 preamp. Others appear to be alternative recordings, or differently edited versions. The Mk1 Vibes, for instance, have no vibrato; the String Section is composed of violins, viola and cello as opposed to just violins and cello; and the French Horn is actually identifiable as such, and played (unusually) with vibrato.

Highlights include a delightfully evocative Boys Choir, tremolo Marimba, French Accordion, and the jubilantly triumphant GC3 Brass (unison saxes/trombones split with trumpets in the top range, if I'm not mistaken). The M400 violins also surprise, revealing a strident mid-range not present in many sampled renditions. A selection of Artist Presets shows off the collection to good effect, including patches that reveal how layering Streetly tapes with sounds from the original library can produce some gloriously bombastic results.

The Streetly Tapes are currently the closest virtual equivalent you'll get to plugging in a real M400, and serve as an excellent complement to the existing library. If you want to get that bit closer to Mellotronic authenticity, this is a must-have collection to add to your M-Tron Pro. Nick Magnus