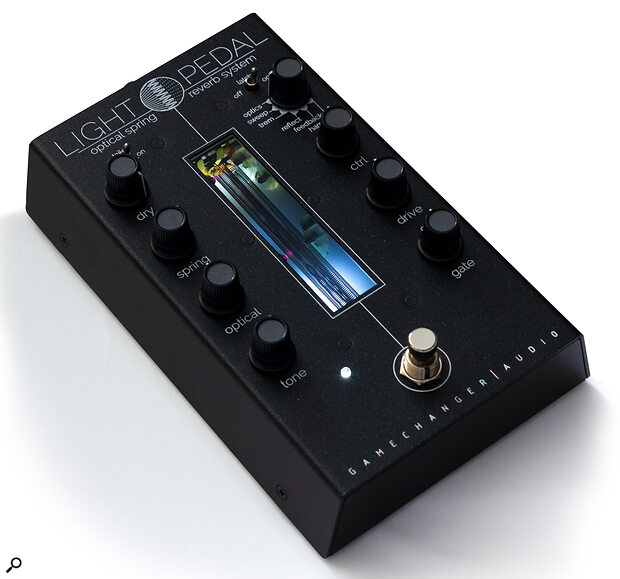 We all love a good spring reverb, and the Light Pedal offers much more than most.

If you’ve seem our reviews of Gamechanger Audio’s previous devices, you’ll know that whenever they unveil a new product you should expect something that’s very far from the ordinary. This splendid tradition continues with their Light Pedal, which is a spring reverb — but not as we know it! The Light Pedal does have three springs that can be operated in the usual configuration, but Gamechanger Audio seem to have taken another bunch of ‘what if?’ ideas and really run with them. Notably, in addition to the output from the springs being picked up by the usual electromagnetic transducers, this device also has also LEDs and infra‑red optical sensors arranged around the springs, detecting the vibrations from various points along their length, to produce different flavours of reverb.

Springs are very sensitive by nature, but this pedal cleverly features a switchable shock sensor circuit that shuts off the audio signal as soon as a mechanical impact is detected: with the rear‑panel sensor switch set to Hard, you won’t get a twangfest whenever you stomp on the pedal. Also, the springs are mounted on a separate circuit board that sits in a resilient suspension cradle to mitigate the effects of vibration on the springs. 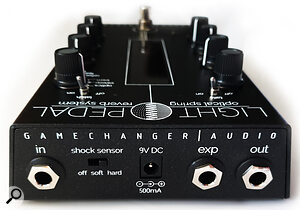 As well as the mono unbalanced in/out jacks, there’s an expression pedal input — which can help you get the most out of Feedback mode in particular.As you can see from the main image, the springs are visible in the centre of the top panel, with the most conventional controls being on the same panel, to the left. The red and white LED illumination follows the playing dynamics and modulation, where relevant. On the left you can set the Spring and Optical wet levels, the Dry level and the overall Tone. You can also select, using a small toggle switch, whether you want the reverb tails to continue when you bypass the pedal. Both the input and output are on unbalanced jacks, providing mono‑only operation.

To the right is where the fun happens, and there’s also a mini toggle switch at the top of that section to set the footswitch to latching or non‑latching behaviour, enabling effects to be brought into play briefly when needed. A rotary switch selects an operating mode with a further rotary Ctrl knob below to adjust the key parameter for the current selection. If you fancy varying the control function during performance when you have no free hands, you can also hook up an expression pedal.

In Optics mode, you can move between different optical sensor pairs using the Control knob, to change which sensors are employed. In Sweep mode, on the other hand, Control introduces a gentle modulation to the optical component, which I suspect is produced by modulating the contribution of the various optical sensors. Trem applies amplitude modulation to the reverb, Control adjusting the rate. The modulation depth of both Sweep and Trim is affected by picking intensity, such that it gets deeper as the note decays.

As a straight spring reverb, the Light Pedal has an endearingly vintage sound, with plenty of watery twang and a long sustain time.

Reflect adds in some warm delay via a feedback path, sending the delayed reverb back to the input in a very murky, lo‑fi kind of way that I found rather addictive. Feedback mode is a novel addition, with some of the output energy from the spring being fed back to the input to create self‑oscillation, and you can tweak the Drive control along with the Spring and Optical levels to change the feedback sound from squeals to drones. If you use the momentary footswitch mode or an expression pedal to control the amount of feedback, it’s possible to create some harmonically complex sustain effects and drones — a bit like a waterphone meeting an underwater cathedral organ. I can see a lot of use for this one in ambient music.

Harmonic mode adds a shimmer type of effect, in which the reverb is pitch‑shifted and some of it fed back to the input; the Ctrl knob seems to adjusts the degree of shift. The sound is, as expected, much more ‘springy’ than from a normal shimmer reverb and it can sound particularly effective fed through further modulation effects, such as a rotary speaker pedal or plug‑in. At the lower settings of Ctrl the effect is dark and grumpy, whereas at higher settings it shifts upwards, adding more sparkle to the sound. Again, the sound takes on a waterphone type of character, and it is oddly addictive. Below that there’s a Drive control for controlling how hard the spring is driven and a gate, which can either cause the reverb to decay more rapidly or act as a reverb ducker if turned in the opposite direction, causing the reverb level to swell at the end of a note. In fact, it behaves more like a decay time control than a traditional gate.

As a straight spring reverb, the Light Pedal has an endearingly vintage sound, with plenty of watery twang and a long sustain time. Switch to the optical sensors and the sound becomes less twangy and generally warmer, so there’s plenty of scope for setting up ‘normal’ reverb treatments, especially as the Gate control allows for tweaking the decay time. Blending spring and optical reverbs often produces the most musical results.

...it’s already capable of some different‑sounding and really engaging effects; I’ve heard nothing else quite like it.

Both the Sweep and Trem modulation options are capable of adding useful types of modulation but, if you want something a bit more experimental, there’s a wealth of sonic exploration to be enjoyed in the Feedback mode. Really, you’ll need to hook up an expression pedal to get the most out of that mode, as just leaving the effect switched on invites chaos. Alternatively, though, you can set the footswich to non‑latching and just bring it in at the end of notes. Shimmer is also usefully unusual: less polite‑sounding than a typical digital shimmer effect, with occasional overtones somewhat reminiscent of whales and dolphins singing in a scrapyard. I liked it!

Ultimately, then, the Light Pedal works really well as a conventional spring reverb, albeit a mono one, but to use it only for that purpose would be to miss out on a lot of creative potential: whether processing guitar, synths, voice or even drums, there’s endless scope to create unique sounds. Having first heard this pedal fighting to be noticed above the noisy chaos of a NAMM show in 2020, I wasn’t quite sure what to expect but, having now tried it for myself, I can confirm that it is possible to create some nicely subtle reverb effects alongside the more gnarly things the pedal can do, especially if teamed with a fuzz box or Gamechanger’s own Plasma pedal. Ideally, I would have liked the ability to split the spring and optical modes to different outputs — that could be the basis for some really interesting stereo effects, and I’ll be interested to see if that can be added in a future model — but as things stand, it’s already capable of some different‑sounding and really engaging effects; I’ve heard nothing else quite like it.

The Light Pedal upholds the Gamechanger Audio Devices ‘be different’ ethos, by incorporating optical sensors and some unusual modulation effects into a spring reverb.