There are studio monitors, and there are multimedia monitors, but can one speaker perform both tasks? Genelec think it can. 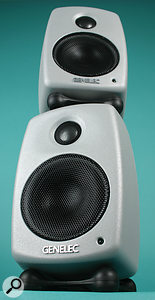 The 6010A is a ported, two‑way, active monitor from the world‑renowned Finnish manufacturers Genelec. It can be used on its own or in conjunction with their 5040A active subwoofer in 2.1 stereo or 5.1 surround setups, so we decided to look at a pair alongside one of these subs. Clearly the company's entry‑level system, it's been designed to bring their expertise within the reach of the cash‑strapped home musician, as well as servicing small‑scale multimedia needs to a high quality level.

The 6010A's two drivers are a 19mm metal‑dome tweeter and a 76mm woofer, both protected by reassuringly solid, perforated-metal grilles, and driven with 12W of amplification apiece. Because the die‑cast aluminium enclosure of the satellite speaker is curved to reduce diffraction and internal resonance problems, if you're going to place the speaker on any flat surface it needs to be fitted with its special rubber foot (or Iso‑Pod), which acts to reduce mechanical coupling with the surface it's standing on, and also niftily allows the pitch of the cabinet to be adjusted to some extent to put the drivers more on axis with your ears. If you prefer to wall‑mount the speakers instead, you can jettison the Iso‑Pods (that sounds like a line from Star Trek!), and use the robust bundled metal fittings instead.

As befits a more consumer‑level product, audio is accepted via unbalanced RCA phonos, while mains is received through a figure‑of‑eight socket. Above these connections on the rear panel are a Lilliputian screwdriver‑operated level control and a set of even more diminutive DIP switches to adjust the frequency response. The latter provide up to 6dB of low‑end cut to compensate for boundary effects, and an additional 4dB 200Hz peak-cut option to compensate for the typical frequency side‑effects that arise when speakers are placed on a desktop either side of your computer monitor.

Back in the '70s, a daring vision of the future of footstools might well have borne a striking resemblance to the shape of the 5040A active subwoofer. Apparently featureless at first glance, it turns out that its 165mm driver, reflex port, socketry, and configuration controls all reside on its underside. The sub's frequency response has sensibly been designed with typical small‑room studio placements in mind, and relies on the boundary effect to some extent — so you'll lose some bass response if you place it more than about 60cm from a wall. Bass tip‑up from more on‑boundary positions can be reduced (again by up to 6dB) using the DIP switches, and there's also the facility to rotate the phase of the subwoofer signal in 90‑degree steps up to 270 degrees. Bass‑management facilities for up to 5.1 configurations are built into the 5040A, with all audio connections on RCA phonos. The entire system's level can be controlled via a chunky little rotary control that sits on your desktop, rather like a thumbnail representation of the sub. 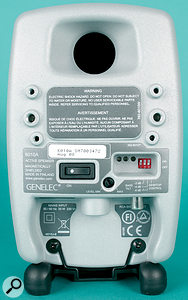 Setting up the system was straightforward, aided by the clear, concise documentation and setup diagrams. Although the size of the speaker level-trimmers and DIP switches made them rather fiddly (especially on the 5040A where I had to up‑end the whole subwoofer every time I wanted to make a change), in the overall scheme of things this isn't much of a gripe, given that these will be 'set and forget' controls for most users. More annoying was the lack of calibration for the level controls, especially the desktop controller, which seems to consider itself too sexy even for a couple of little lines indicating minimum and maximum settings: you have to rely on the physical placement of the control as a reference here, which isn't ideal given the triangular symmetry.

Running the 6010As on their own at a fairly low level, they presented an immediately satisfying sound, with a warm mid-range and decent definition in the stereo field. The upper mid-range and presence regions have a slightly harder edge than on some monitors, and this lends an immediate impact to the sound, which will appeal to a lot of people for the various music‑listening, web‑audio, gaming and presentation purposes that multimedia speakers are frequently put to. This translated as a slightly less appealing edginess on more acoustic and classical reference material, but from a studio production perspective it did tend to focus attention usefully on these critical frequency regions when working with most other commercial music styles. I'd have liked a bit more air in the sound at the extreme top end, but that's more a question of personal taste rather than anything that really affects the quality of the reproduction.

However, from the perspective of the 6010A's usability in the studio, I had a few more important concerns. First, as on a lot of small, ported speakers, the low end seemed hyped beyond the capabilities of the three‑inch driver, overstating the low mid‑range in a way that made it tricky to judge LF levels, particularly between kicks and basses, although to their credit Genelec appeared to have done a respectable job of damping the porting resonances, as the sound still felt quite controlled. I ended up using the –2dB bass EQ out of preference, even for free-field placement, to make this element of the tonality less distracting.

I also found that the upper mid-range voicing made guitars, cymbals and vocals in heavy‑sounding mixes homogenise, to some extent masking things like reverbs and delays, reducing my ability to differentiate and hear inside these sounds at mixdown. Of course, the inevitable power‑output limitations of such a small system don't help here, either, because mild system distortion, which might potentially go unnoticed by the inexperienced user, will further cloud things, especially in this range. In my experience working with the system in the nearfield, when volume reached a level where it became awkward simultaneously to conduct a normal conversation, the fidelity began to suffer, with drums losing their edge and basses changing their tone as distortion products crept in. To be honest, given that this is an entirely active system which isn't designed to kick out huge levels, I'd have liked the front‑panel LEDs on the speakers to have been bi‑colour, lighting red to warn of approaching overload. As it is, if you're going to use these speakers for mixing purposes, I'd advise playing it very safe with the volume levels.

Although Genelec's choice of tweeter waveguide to restrict vertical dispersion makes a lot of sense in terms of reducing phase‑cancellation problems — this is, after all, a speaker that's likely to be used on a desktop — you do need to ensure you listen on-axis vertically, because the high‑frequency character changes pretty rapidly off‑axis, especially as you move above the ideal alignment. For this reason, I felt it was a shame that the Iso‑Pod mounts wouldn't allow a greater range of backwards tilt, as even the most extreme setting didn't get the tweeters pointing at my ears properly in a typical desktop situation.

Having said that, though, I can't say I'd particularly recommend the desktop placement, as even with the EQ adjustment provided I didn't like what this did to the sound, adding a kind of slightly muddy layer and confusing balance decisions. Much better to get hold of some kind of short stand so that you can sit the boxes more at ear height, where reflections from the desk make less of an impact. Needless to say, following initial experiments, I quickly moved the speakers to stands for the bulk of my listening tests. 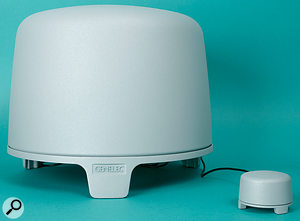 The distinctive looking 5040A subwoofer can be used with the 6010As.

Adding the 5040A subwoofer into the picture strapped on another couple of octaves of frequency coverage below the crossover point of 85Hz, with the predictable increase in low‑end warmth and a surprising degree of output even towards the LF extreme — another characteristic that can contribute to subjectively more involving sonics in multimedia applications. Although setting up was a bit fiddly, as I mentioned, the provision of quite comprehensive phase‑rotation facilities does go beyond what you'd normally expect of a speaker in this price bracket and increases your flexibility somewhat, especially as far as front‑back positioning is concerned.

Unfortunately, though, the 5040A seemed, to me, to do a less convincing job of dealing with its porting side‑effects than the 6010A, which does compromise its abilities in the studio. Some low frequencies seemed somehow to find their way under the radar, while others acquired significant mid-range harmonics, which can bias mix balance judgements for bass instruments. The damping seemed, again, to be respectable, but there was still a considerable amount of low‑end time‑domain blurring that I found challenging when faced with processing prominent low‑end transients. In short, you can hear that stuff's going on down there, but not with enough clarity to help tremendously in a mix situation.

Overall I think that Genelec's 6010A/5040A combination is a well‑engineered package that meets the needs of multimedia applications very neatly. You get an attention‑grabbing, dynamic, larger‑than‑life sound in a small, smart, rugged system that affords lots of setup flexibility, including 5.1 surround management and level control. In addition, it is voiced much more along the lines of a studio monitor than a lot of multimedia systems from less thoroughbred stables, and may appeal more to studio denizens as a result.

The needs of multimedia are, however, to a certain extent at odds with those of recording and mixing, where more revealing and less flattering tools tend to be required. As such, I'm not sure that this system is particularly well suited to the small studio production environment, despite the considerable appeal of its sound on a purely subjective level (particularly if you like that forward mid-range tone). If mixing is a first‑time buyer's foremost priority, then their money might be better spent on a more neutral‑sounding system that isn't as eager to please.

There are lots of companies now providing stereo speakers in the price range inhabited by the 6010As, and although many multimedia speakers are much cheaper than this (and sound it!) there are a few contenders from the established names — Mackie's MR series, for example. However, if you're looking for something more suited to studio work, a couple of worthwhile alternatives to consider would be Adam's A5 and KRK's VXT4, both of which Paul White found more restrained at the low end. You can also pick up an optional subwoofer for either (ADAM Sub 7 or KRK 10S) if you want to extend to a more full‑range system roughly in line with the 6010A/5040A rig I've looked at here.

As you'd expect, given their heritage, these new entry‑level offerings are extremely capable performers, and I have little doubt that they will quickly bring the Genelec marque to the attention of a wide range of new customers. Despite the studio‑style voicing, though, the system's assertive and characterful sound is much better adapted to multimedia applications than to music production, so budding mix engineers may prefer to steer towards something less flattering if investing in monitoring for the first time.