Can speakers of this tiny size deliver anything like the signature Genelec sound?

When we asked for a pair of Genelec 8010As for review we knew to expect something small, but when the cardboard box turned up at my studio it was even more diminutive than I expected. And then, when I opened it, I found that almost half the space inside it was packing to support two smaller cardboard boxes, inside which I found polystyrene packing pieces plus a small cardboard box holding the mains cable. When I finally got to the speakers, they each turned out only to be around the size of a pint glass, measuring 195 x 121 x 116 mm and weighing 1.5kg. So, when Genelec say that the 8010As are ‘extremely compact’ bi-amplified speakers they are not in any way kidding! 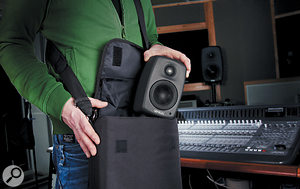 Built into the same style of cast-aluminium casing as the larger 8000-series monitors, the rear-ported 8010As have a balanced XLR input. Power comes in on a small two-pin mains socket; there isn’t enough room for an IEC socket. The driver configuration combines a three-inch woofer with a 0.75-inch metal-dome tweeter, which is driven via a pair of 25W Class-D power amplifiers. The crossover frequency is 3kHz. Energy-saving circuitry switches the monitor to standby when no audio input is detected, though this can be overridden by the user if desired. The familiar Genelec IsoPod rubber base is fixed to the speakers and can be adjusted to change the angle of tilt as required. DIP switches on the rear panel allow tailoring of the response via four bass-tilt settings and a desk-proximity 200Hz notch. Steel grilles protect both drivers, and a green LED lights to indicate that the speakers are powered up.

Despite the fact that these speakers would barely come up to Scott Tracy’s knees, they’re capable of a maximum sound-pressure level of 96dB, with a frequency response extending from 74Hz to 20kHz (±2.5dB), with the -6dB points at 67Hz and 25kHz. And yes, they do sound like proper Genelecs, albeit with less in the way of deep bass and a more limited maximum SPL. Bass guitars and kick drums sound more punchy than they have any right to on speakers of this size, and the lack of really deep bass actually makes them sound very tight and focussed. The highs are also smoother sounding than from some metal-tweeter designs I’ve used, so it’s possible to use the 8010As for long periods without fatigue.

While not exactly cheap for such tiny speakers, the 8010As are most definitely real Genelecs; they’re not some watered-down consumer version. If you want deep bass you can always add a sub, but for monitoring in small rooms with difficult acoustics, as a mobile reference when working in different studios, or for confirmation monitoring when recording on location, they actually do a great job. In fact, my only minor concern is that two-pin power connector — if the rest of your system works from power adaptors (as many laptops and interfaces do) you may end up having no mains earth connection at all, and that can sometimes lead to problems with interference or shocks from static build-up. In short, don’t be put off by the small size: these are serious little monitors. Paul White